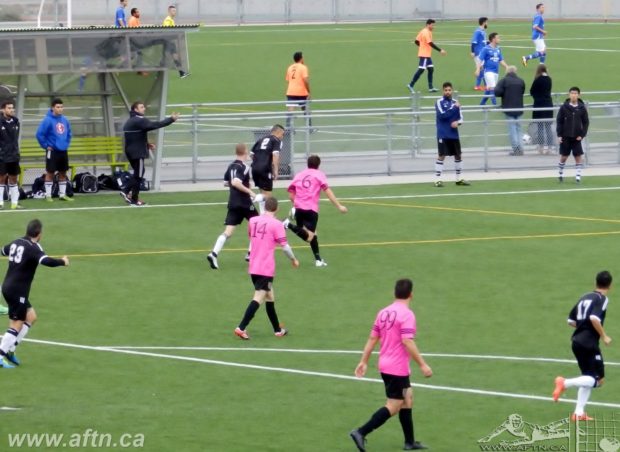 Is anyone capable of stopping Coquitlam Metro Ford Wolves from lifting back to back VMSL Premier titles? It’s looking increasingly unlikely with each passing week.

Coquitlam made it six wins out of six to start the 2016/17 season with a 2-0 victory on Friday night against second placed West Van FC at Charles Best Secondary.

A cagey first half saw the teams go in at the break scoreless, but second half goals from Jeff Lee and Juan Sanchez gave Coquitlam the three points.

Metro Ford were missing a few of their key starters, and despite some strong second half pressure from West Van, worryingly for the chasing pack they looked fairly comfortable in the win without them.

The victory increased Wolves’ lead at the top of the standings to four points, and they have a game in hand. It’s already not looking like it’s a case of “will” Coquitlam win the title again, and more like “by how much”? Also, can they go unbeaten for the whole season? They’re certainly going to have the 11 other teams gunning for them even more than they already do.

It was West Van’s first defeat of the season but they stay in second place in the table by three points over Rovers Tigers United. 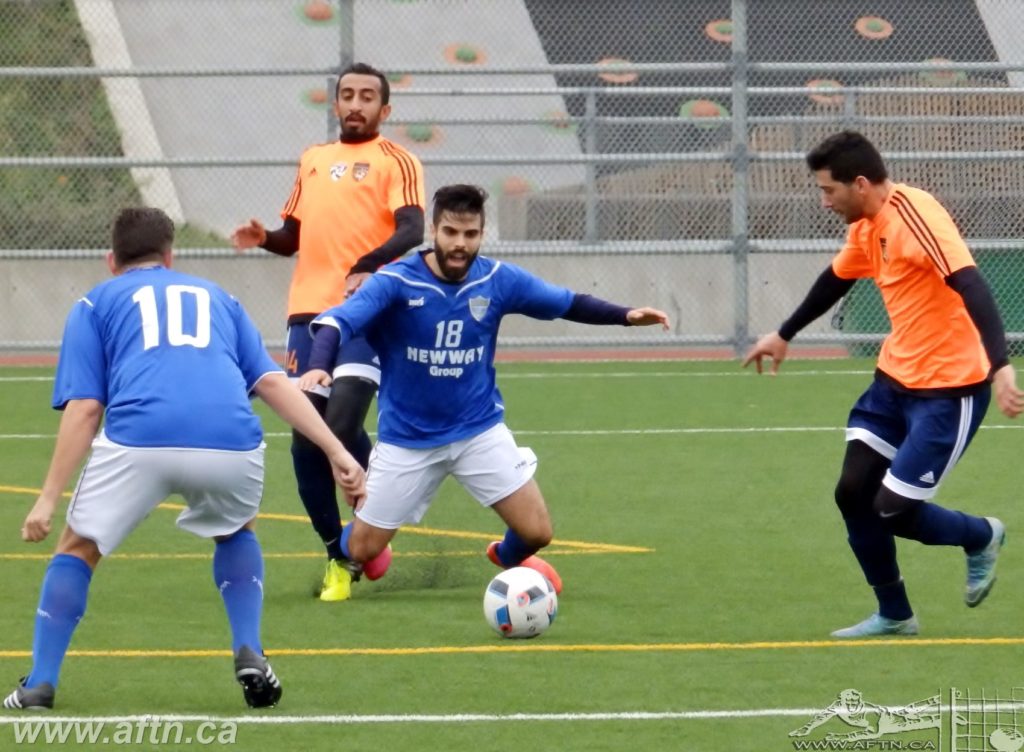 The Tigers served up a first half mauling of ICSF Columbus on Saturday afternoon up at the Empire Turf in an easy 3-0 victory.

We took in the first hour of what was a pretty one-sided encounter, and it was former TFC man Nick Soolsma who was once again the guy doing the damage for the Tigers, taking his tally to the season to nine goals after a brace in this one.

The first came when he pounced on some slack defending to round the Columbus keeper and easily slot home the opener. Jesse Dhami made it two when he headed home after the Tigers kept the pressure on from a corner, before Soolsma grabbed his second to make it 3-0 from the spot just before half time, after he’d been bundled to the ground by the Columbus ‘keeper.

We’re not sure how all the second half played out as we’d headed off, but there were no further goals.

We did manage to capture the last two goals on camera (and the tail end of the first one). As crappy as always, but better than nothing, so here you go!

The loss keeps Columbus rooted to the foot of the table, tied on four points with Croatia SC, but with a worse goal difference by a staggering ten goals. It could be a quick return to Division 1 for the Columbus guys.

Croatia lost a close one 2-1 to Club Inter on Friday night at Burnaby Lake, while Pegasus won 3-0 at North Delta on Saturday, and Westside beat Richmond Hibernian 3-1 on Sunday to round off the weekend action in the Premier.

Club Inter and Richmond Hibernian meet tonight at Van Tech Turf in a make up game. Kick off is 9pm if you’re in the area and fancy a late night football fix.

So all those results leave the VMSL Premier table looking like follows after Week 7. 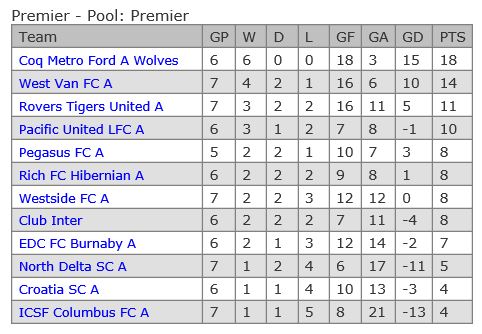 Division 1 continues to be wild and entertaining.

NVFC Norvan Lions stay out in front on 14 points after a 3-2 win at GN Sporting Club in Surrey on Friday night. That was the Lions third win on the bounce and keeps them a point ahead of CCB Guildford, who served up a 4-0 hammering of South Delta Royals at Newton on Saturday afternoon.

The Surrey side have a game in hand after last week’s bye.

Former leaders Binger’s Army’s slide down the table continued following a 0-0 draw at FC Romania on Saturday , while bottom club Metropolitan grabbed their first win of the season in a 2-0 away win at Rino’s Fury.

Rino’s Tigers had the bye this week, but there was better news for Rino’s Vancouver on Saturday afternoon at Burnaby Lake. 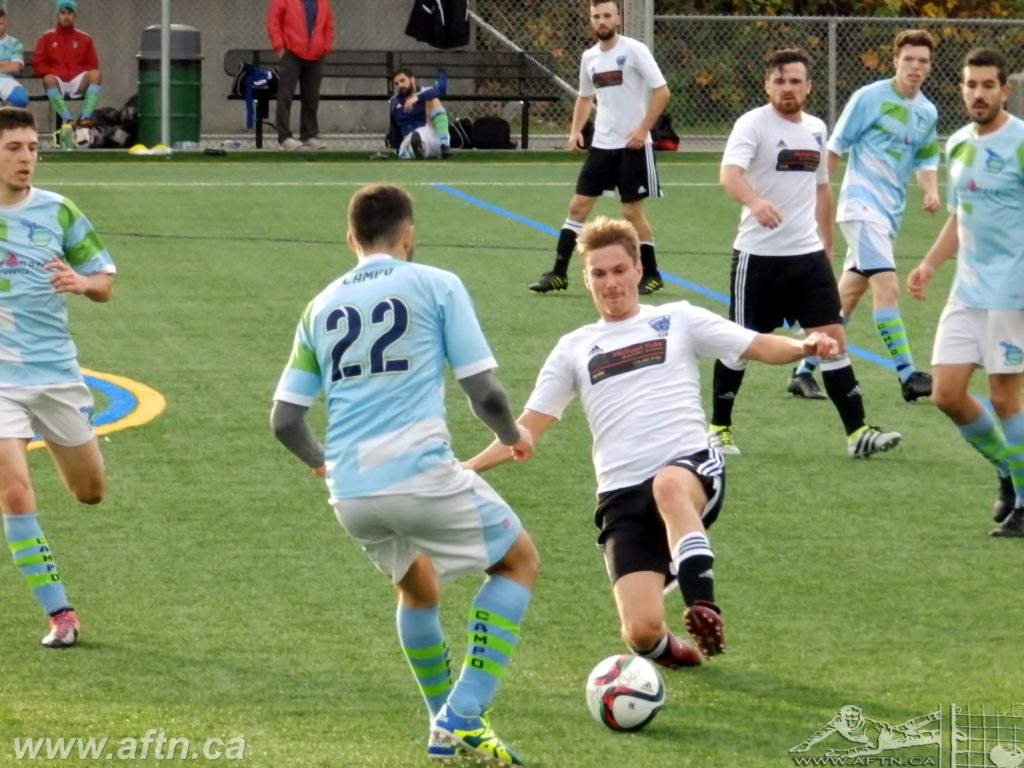 We took in the latest grudge match between the Rino’s lads and Campo Atletico, with Rino’s running out 1-0 winners in an entertaining match.

The two game changing moments took place in the first half. The first came when Rino’s keeper Patrick Hayward came up with a big penalty save and Campo were punished for that miss when Rino’s pounced on some poor defensive play to fire home the winner just before half time.

You can see both of those moments in our video below.

There’s new leaders in both Division 2A and 2B, and it’s still very tight at the top of both.

The three teams tied on points at the top of Pool B became two when leaders Harps dropped two points in a 1-1 Celtic clash with Vancouver Greencaps on Saturday afternoon.

That draw saw Harps drop to third, with Shaheen FC heading back to the summit after a 3-2 win over Unicorns FC on Sunday afternoon. Shaheen have the edge over second placed Gastown FC, who beat Serbia FC United 2-1 on Friday night, by two goals.

The only unbeaten record in Division 2 has gone, and in some fashion as well, with Burnaby Metro Athletic thrashing Sea to Sky 6-0 at Burnaby Lake on Friday night.

That left the Burnaby side in second spot in Pool A on 14 points, one behind new leaders Sarajevo FC, who got back to winning ways with a 1-0 win over Vancouver Strikers on Saturday afternoon.

Last week’s leaders, 13th Legion, will be wondering how they lost their first place position after throwing away a two goal lead at home to Euro FC. 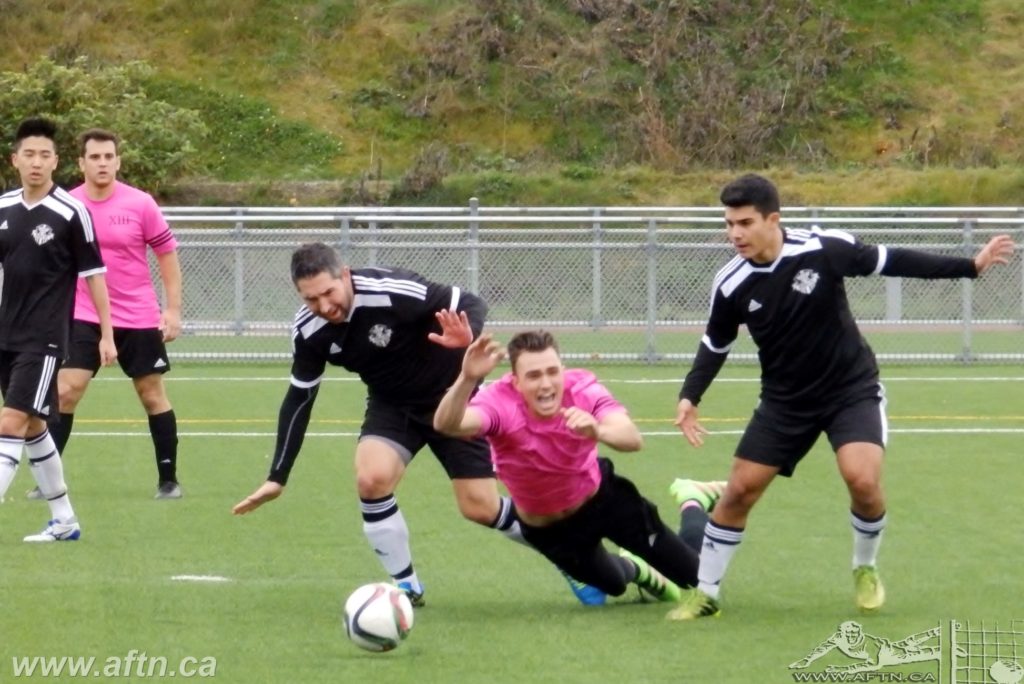 We took in the match at the same time as the Premier game between Columbus and Tigers. That’s why we love heading up to Empire. The chance to double dip. Although on this occasion, the Legion’s fluorescent pink strips and Rovers fluorescent Orange ones, made us feel we’d stumbled across some walking highlighter convention.

We left at the hour mark to head to the Campo-Rino’s game, and couldn’t believe the final 2-2 scoreline when we saw it later. 13th Legion were two up and seemingly cruising after grabbing their opener on the stroke of half time and the second just after, following an initial saved penalty. But Euro had pressured well in the first half, so it wasn’t totally undeserving of a comeback.

You can see 13th Legion’s second goal below.

America FC stayed unbeaten and on top of Division 3A following their 0-0 draw with Westside FC Juniors, where they sit tied on points with Royal City SC, but with a better goal difference and a game in hand.

Coquitlam Metro Ford Lupi also remain unbeaten in Division 3C, and with the only 100% record in the VMSL outwith their big brother Wolves, but they were made to work hard for it this week in a narrow 1-0 win at Richmond Olympics.

The big winners this week were Division 3B leaders Bosna SC, who hit 10 past the hapless GFC United Lions without reply. The Lions remain firmly fixed to the bottom of the table, yet to score all season and with a goal difference now of -35.

Some good matches coming up this weekend. Get out and see some if you can. You’ll find all the fixtures and kick off times HERE.

You can see all our photos from the three VMSL matches we took in this past weekend HERE or in the Flickr slideshow below.