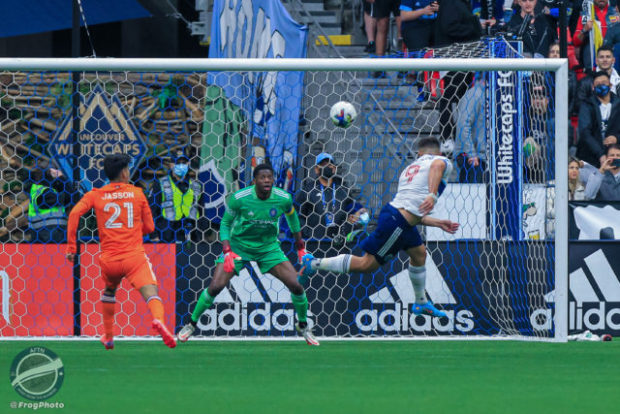 You wouldn’t be surprised if Vanni Sartini had some sleepless nights after last week’s performance, but as the sun shone over BC Place, the Italian looked anything but stressed, sporting his best casual Friday look, with his t-shirt tucked into his Levis.

Going into the match against the champions, Sartini made three changes, bringing in Florian Jungwirth in defence for the suspended Jake Nerwinski, Cristian Gutiérrez at right wing-back for Javain Brown and Leo Owusu for Michael Baldisimo in the middle of the park.

In contrast to last week’s thumping, the team looked much more assured and cohesive, moving as a unit and competing for second balls with greater aggression and tact. Forget about the result against Columbus Crew, this game was the real foundation from which a positive ‘Caps season can grow!

Starting at the back, Thomas Hasal finally got some touches other than picking the ball out of his net. I’m not going to refer to him as a “youngster” because as the saying goes: “if you’re good enough, you’re old enough”. The goalkeeper started with a slightly sketchy clearance after charging out of his box in the opening five minutes, but from that point on, he looked well fitting of the number one shirt.

NYCFC managed to get off 19 shots, but Hasal only had to deal with four efforts on target. His first real save was a smart one, down to his right with a strong hand to deny a low drive from New York’s Talles Magno. The only other trouble the ‘Caps goalie faced in the first half was a header from Alexander Callens, but luckily the crossbar was there to help him maintain a clean sheet.

Going into the second, Hasal was on vacation till the 89th minute when he was called into action to deal with Thiago Andrade’s volley. Whether it was for the cameras or not, the goalkeeper sprung up to tip the ball over the bar, finally giving the Whitecaps faithful a talking point. 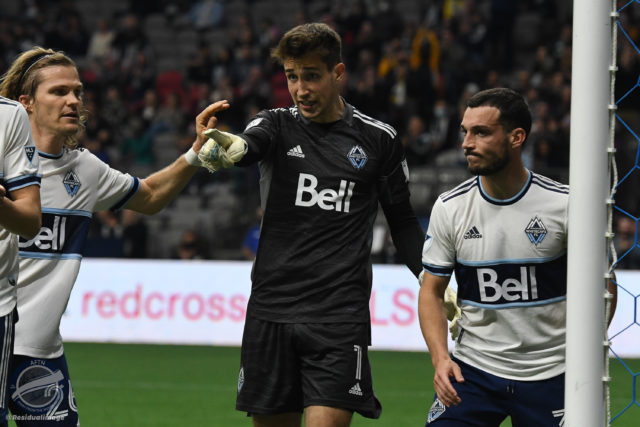 A clean sheet against the champions will do Hasal’s confidence a world of good — importantly hushing any doubters that questioned his capability. Final note on goalkeepers: Maxime who?

In general, the defence was much better this week. Both Tristan Blackmon and Jungwirth set the tone with some big challenges that really perked up the crowd — Blackmon’s last ditch block on Thiago Andrade got arguably the biggest cheer of the night.

Whilst the centre-backs looked good, I was more impressed with the wing-backs, who improved tenfold — I say that mainly on the basis of them being so bad last week. While the Cristians, Dajome and Gutiérrez, didn’t do anything special in the game, their positional play was solid, forming a good unit with the back three. It seems wise to stick with Gutiérrez for a time to give the team some stability. Brown can have good moments, but he’s too unpredictable.

If there is one area of improvement for the wing-backs, it would be getting the ball into the box. As with last week, the majority of deliveries have been poor. We all know the ability of Lucas Cavallini and Brian White in the air, let’s get them some better service! May I suggest watching some videos of Trent Alexander-Arnold and Andy Robertson…

As with the wing-backs, the midfield was much improved with the trio of Owusu, Russell Teibert, and Ryan Gauld complimenting each other well. Owusu particularly was good on the ball at times — he had an infectious determination that gave the ‘Caps strength in stifling attacks and transitioning on the counter. 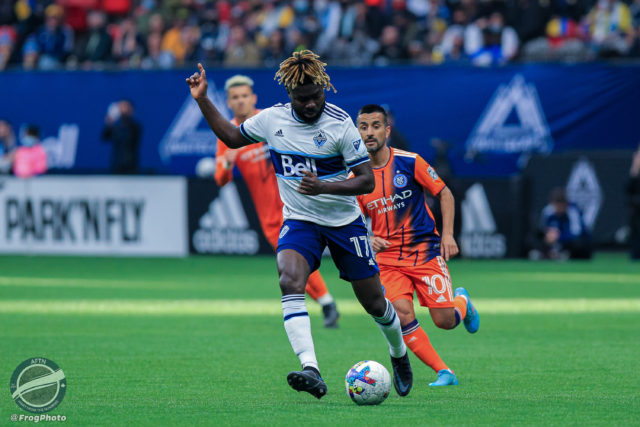 Combining Owusu’s skill on the ball with Teibert’s dogged approach also gives Gauld more licence to pick up dangerous pockets of play in the opponents’ final third. Granted, this didn’t happen too often in this match due to the lack of possession for the ‘Caps, but in future games, this trio could be key in unlocking the Scots technical ability and helping us see some of the play that ignited the league last season.

When Owusu started to look a bit leggy, he was replaced by Sebastian Berhalter, who I think also has the dynamism to work in this midfield — he was a bright spark amidst the despair last week and also looked comfortable in this game.

We’ll spare you the heat maps that illustrate the 30%-70% possession stats in favour of NYCFC, but it’s worth noting that the ‘Caps largely contained the New York pressure. I wouldn’t be surprised to see Sartini fall back on the same defence and midfield next week.

In attack, Cavallini looked like a man on a mission. The big man was relentless in smashing into the opposition — it was quite the spectacle. I’m sure he’d do well under Sean Dyche at Burnley. However, if he wants that dream move to Turf Moor, Cavallini will need to start adding goals. The forward had a couple of good moments, but lacked conviction in his efforts. BC Place was on its feet willing him to connect with that scissor kick but sadly it wasn’t to be. 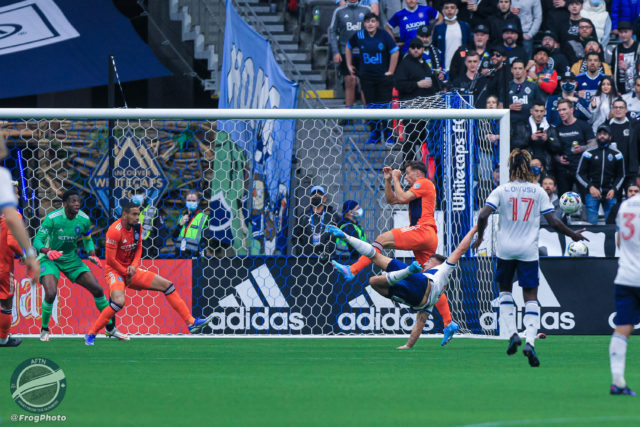 In his post match interview, Sartini said he would have kept Cavallini and White on together if the Canadian hadn’t picked up a yellow card, believing that the pair could have given NYCFC some concerns in the closing stages. This was great to hear because Sartini could have easily been pleased shutting up shop against the champions.

Next week the ‘Caps are down in Houston against the Dynamo in a match where I predict goals. Building on this week’s performance, I picture nothing other than some delicious Gauld deliveries into the big men in the middle, with Cavallini and White to both the bag their first goals of the season.

It has to happen at some point. Doesn’t it?!