Coquitlam’s Percy Perry Stadium was the venue and around 100 Caps fans took in proceedings. By the end of the two hours, I’m not sure that either Whitecaps management or fans will have learned that much.

These games are always difficult. Early morning, cold conditions and playing against friends and team-mates. This didn’t deter the odd robust challenge from taking place, with the younger players particularly not afraid to mix it up a little. Pleasing to see.

What wasn’t so pleasing was the fact that despite all our strikers playing during the game, no one was able to find the back of the net. 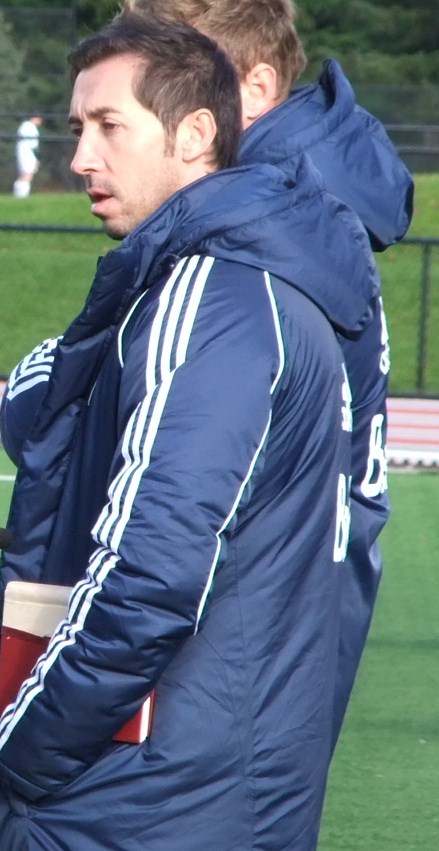 A fact not lost on Martin Rennie when he spoke to reporters after the game:

“I think ultimately it’s not surprising to me because of the way the team play, it’s so safe all the time, there’s very little risk or chances taken in the final third. And the only way you can score goals is by making penetrating passes, having penetrating runs, taking chances.”

The lack of goals also concerned Paul Ritchie, but he also had a different perspective on it:

“From my point of view, being a defender, I’m delighted there’s two clean sheets…That’s where you build from.”

For the players, thankfully this wasn’t a one off, make or break game for them.

It was sluggish at times and obviously a training match, but the players weren’t slacking, which was good to see.

A lot of the players were tried at different positions during the game. Good to see what they can do. Paul Ritchie described next year’s team as “a blank canvas” at the moment.

The defence certainly is.

Carlyle Mitchell impressed again today, whilst Jay DeMerit came out of the game at the half. Greg Janicki shaded Michael Boxall in centre half performance. Neither may be around come cutting time, but if Janicki keeps turning in these performances, and with Boxall taking an international spot, the old D2 fave may find himself moving up the pecking order a little. 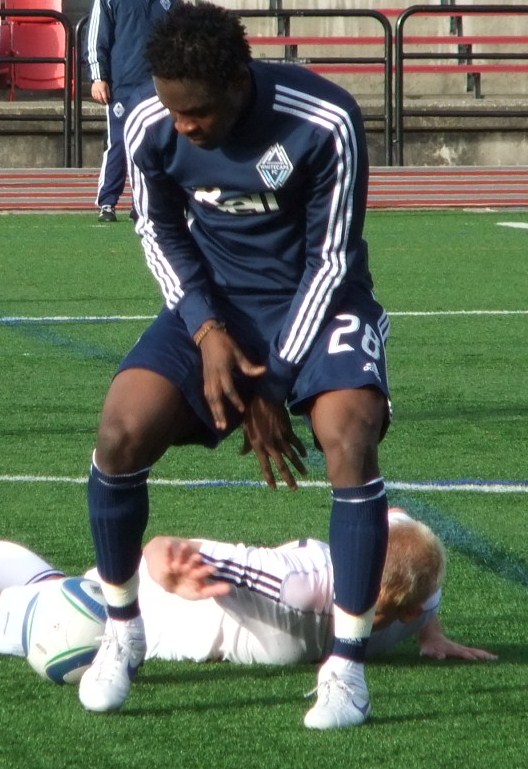 Gershon Koffie even had a stint at right back, obviously Tommy’s “Right Back Roulette” game is still in operation. The new management team are clearly pretty high on the Ghanaian, even when in an unusual position for him, with Ritchie telling reporters:

“I thought Koffie looked good at right back, and that’s something we’ll consider over the close season, depending who we look to bring in and what players are available. And that might be a possibility.

I think he’s a young lad, who’s got so much potential and it’s something we must look to nurture and give him the best possible outlook to playing the game. If he can play in a number of positions, that can help him in the future.”

A view which Rennie also echoed:

“I actually quite liked him there. He obviously doesn’t necessarily know all the ins and outs of the position, cos he probably hasn’t been coached to do that. In terms of his physical and technical ability, he’s very, very good there.”

The second half saw all the “action” and most of it came through Camilo, who was one of the few to stand out.

He nearly grabbed the only goal of the game with the last kick off the game, when a free kick bounced off the post and bobbled along the goal-line, before Jay Nolly pounced on the loose ball.

Jay told us afterwards that there was no way he was letting that in the back of the net, nor an earlier lob attempt!

The lob attempt from Camilo also provided the highlight of the game, although I’m not sure that Jay would agree on that assessment.

As his 50 yard lob headed towards goal, Nolly tracked back to keep it out, landing in the back of the net.

The next thing he knew, Nolly had the crossbar on top of him, with what remained of the goal crumpled around him!

I’ve never seen anything like it, but thankfully Jay was ok to continue.

It was an incident that Rennie laughed about after the game:

“It was pretty enjoyable to see that goal falling over, that was one of the highlights.”

Camilo also had another great chance to score in the second half, blasting narrowly over from close range after some great build up work from Omar Salgado.

Salgado berated Camilo for not burying the shot. Good to see some passion in just a training session.

Salgado was another of the guys to impress. He worked hard and continued to run at the defence, without getting the break or support needed a lot of the time.

Eric Hassli came off at the start of the second half with what looked like a leg knock, and it was immediately iced and taped up. He looked a little out of sorts in the first half, so this might have been why. 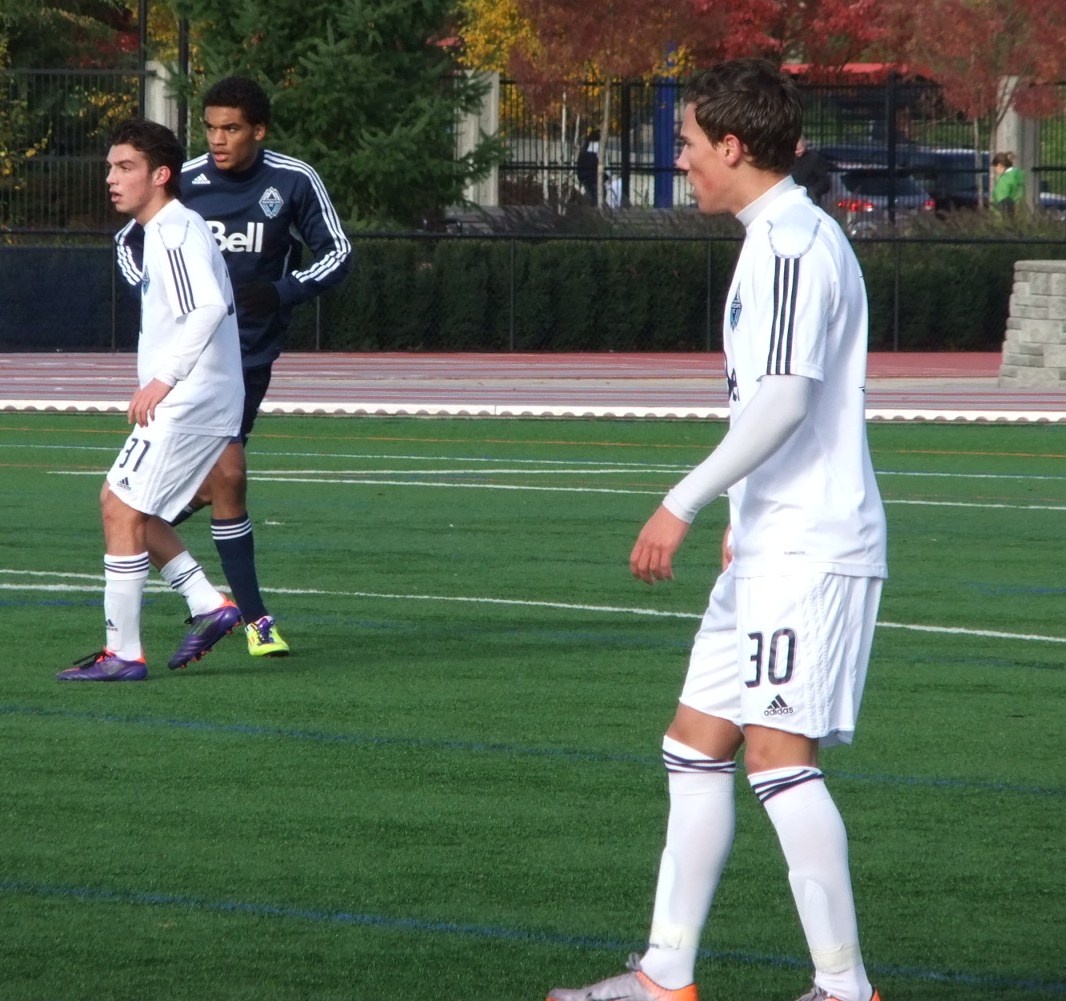 Caleb Clarke had a few nice runs and touches when he entered the game as a second half substitute, but Ben Fisk struggled a little to get into the game when he came on.

The midfield is a known problem area. Very evident today. It was good to see Russell Teibert back and excelling though.

Rennie was impressed by Teibert’s attacking qualities and would like to see him “playing wide, higher up”

The standout guy in the middle though was Bryce Alderson. He looked mature beyond his years and was keen to run, fight and push forward. Rennie was impressed:

“Young Bryce is only 17 years old and he looked as if he was part of it for years today. He’s always looking for the ball and as a young kid, in this environment, to have that about him, there’s something special about the kid. So we just got to keep an eye on him and keep nurturing him the way we hope he would mature and who knows what could happen for him.”

Last season, youth was certainly not given a chance. The signs are that this will be changing under the Celtic Connection. Rennie has already said he doesn’t care about a player’s age, just their ability and the performance of the young guys didn’t go unnoticed on him today:

“I like the young kids, I really do. They don’t look out of place.”

Today was also a great experience for the fans, with the players taking a lot of time after the match to mingle, chat and sign stuff. The passion off the pitch in Vancouver is great and you know that that is going to be something that the new management team also instill on it. 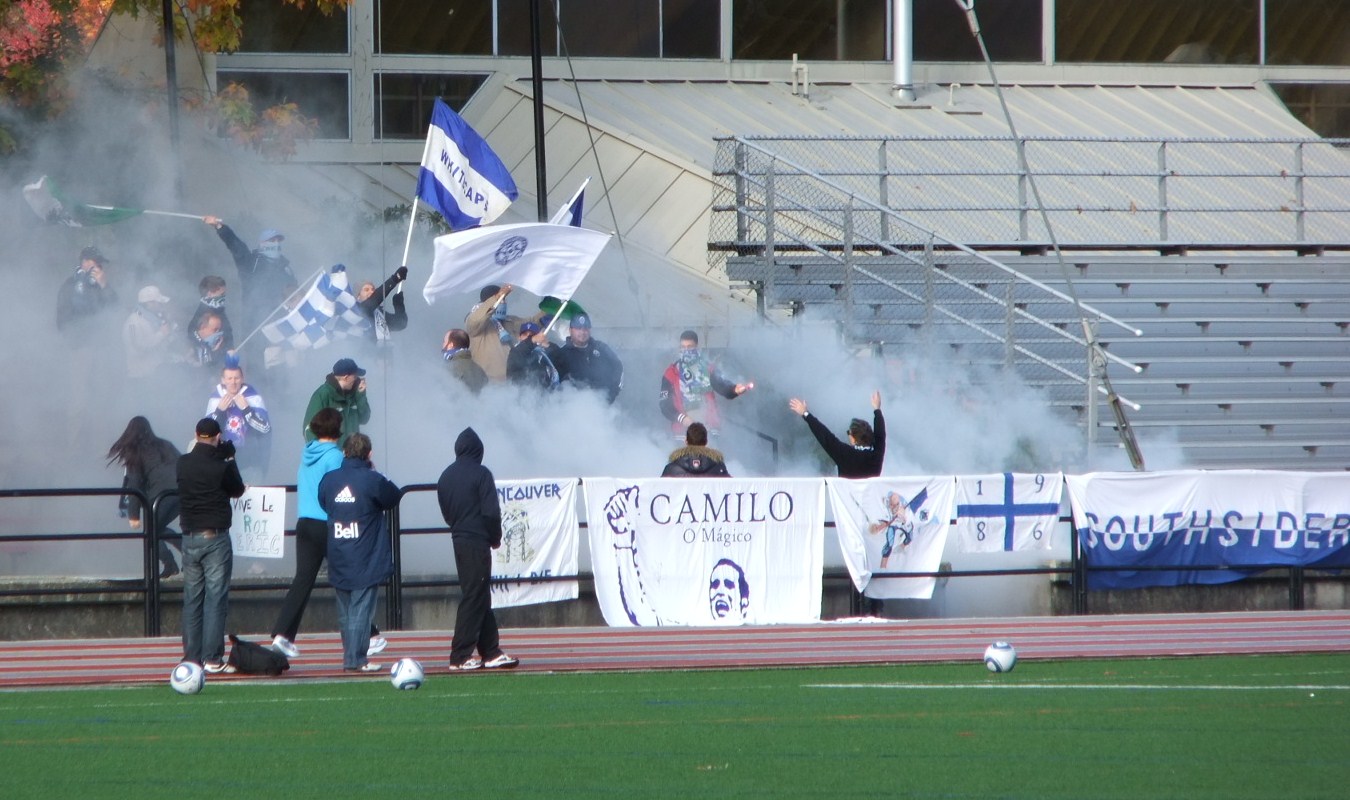 Around thirty Southsiders were amongst those that showed up, and sang non stopped.

What did Rennie think of the fans today?

“It was excellent. I was really encouraged to see supporters coming out, at this point, at the end of the season. The noise they made, they never stopped singing the entire time. It was a little bit like Europe, which was really great.

That’s one of the things I’ve talked about all week. The supporters here are incredible, and that just showed it.

On a cold Saturday morning, they’re out here, making noise and supporting the guys and getting behind them and I think that probably helped the tempo of the game a little bit too, so it was great.”

Tomorrow is a rest day for the players before back to two days of training, followed by a final intrasquad game on Wednesday morning.

Players should learn their fates by Friday, as the next step of the new era commences.

When Rennie came here, he had some ideas of where he needed to improve the team. Have they changed in what he’s seen so far, or are they still pretty much the same?

“I think they’re the same. I think that it just takes time. What you really want is on the start of pre-season you want to look around the locker room and feel like you’ve got the best possible group of players that you could possibly have hoped for. And that’s what the job is between now and then and then it’s about building the team. So that’s where we are.”

Fans will probably have seen the last of a few players in a Caps uniform today.

For those players still on the edge, they have three more days to prove their worth to the team.

After what we saw from some today, they may have a hard job on their hands.

Stage two of the new regime is close and that could be the most exciting one, as the 2012 Whitecaps will begin to take shape.