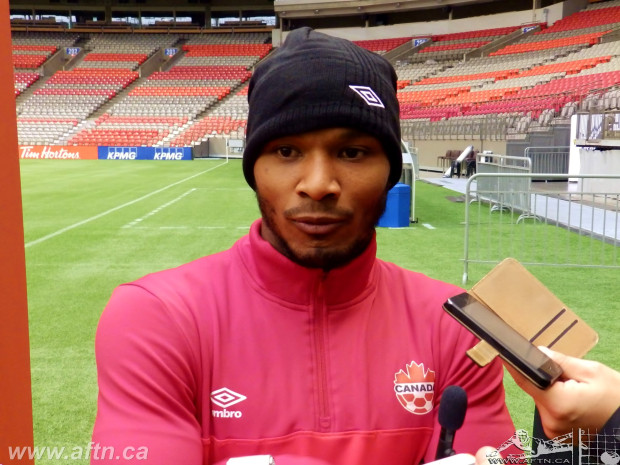 Sunday will be a historic day for Ottawa Fury and Canadian soccer.

The Fury are heading south to New York to take on the Cosmos in their first ever NASL Championship game, but they’re likely going to have to do it without their influential midfielder Julian de Guzman.

De Guzman is away in Vancouver with the Canadian national team, for the two upcoming World Cup qualifiers against Honduras on Friday and El Salvador next Tuesday.

Inexplicably, the NASL have scheduled their Championship game for this coming Sunday, right in the middle of the FIFA international window and forcing the Canadian international to make the agonising choice between playing for club or for country.

“[It was] a very tough decision,” de Guzman told reporters after Canada’s training session at BC Place on Tuesday. “For the past couple of weeks I’ve been going back and forth between club and country. It wasn’t even confirmed that we’d playing in the Final, so we didn’t know at that moment. It was in the air.

“It was something that everyone understood let’s just focus on what’s happening, which was the semi-final game, but at the end of the day I did speak to Benito [Floro] and Marc [Dos Santos] as well. First they said they understand the national team commitments. It’s a FIFA World Cup qualifier game, so it’s something that’s important that I’m around for. It’s what we’ve been working for, for a very long time.

A difficult decision from the start, the reality really hit home when Ottawa clinched their berth in the Championship game on Sunday, in front of a record 9,346 crowd at TD Field.

“At that moment, when we were ok with that, we weren’t in the Final,” de Guzman added. “Now we’re in the Final, it’s kind of a tricky situation, but more than likely, it’s looking like I’ll be staying here throughout the whole camp.”

The Fury claimed their spot in the NASL Championship game in dramatic fashion this past Sunday, with former Whitecap Tommy Heinemann grabbing the vital goal in a 2-1 win over Minnesota United in the 108th minute.

A proud moment for Ottawa Fury, Canadian soccer and de Guzman. But that joy turned to sheer disappointment for the midfielder when he realised he wasn’t going to be able to play in the Championship game.

And de Guzman feels no player should have to deal with the dilemma he’s been faced with, and is critical of the league for scheduling their showcase game in the middle of an international window.

“To miss a final, it’s heartbreaking,” de Guzman admitted. “It’s something that I don’t think anyone ever wants to experience. I think it’s something itself the league needs to look in to in the future.

“If MLS, and most leagues in the world, stop for international matches, then I think the NASL should be able to do the same thing.”

Ironically, Vancouver hosting their first World Cup qualifier for over 11 years has scuppered de Guzman’s chances of heading back to his club for the final. If the Canada game had been anywhere but on the west coast, or the NASL final wasn’t on the east coast, playing in all three matches may have been doable.

“That was the idea at first,” de Guzman admitted. “Me leaving after the game against Honduras and joining the team in New York. But we weren’t even sure when the game was going to be because we had to wait for the New York game to finish.

“The New York game is on the 15th. If it was in Ottawa it would have been the 14th. So it was still in the air. We couldn’t put a finger on it. But because it’s on the 15th, it would probably take day for me to get over there, sit on the bench and maybe come off the bench. Then another six to eight hours from New York to El Salvador.”

For fans still holding out hope that de Guzman could make it to New York for Sunday, it’s looking bleak.

“Just the time inbetween for recovery and what not,” de Guzman said. “It was pretty much, almost impossible to go forward with it and have me fit for all the games. That’s why, at the end of the day, my focus right now is the national team. It’s important that I have to miss an important game. Hopefully this could be rectified in the future.”

Hopefully it can, because it’s been a shocking scheduling decision by the NASL.