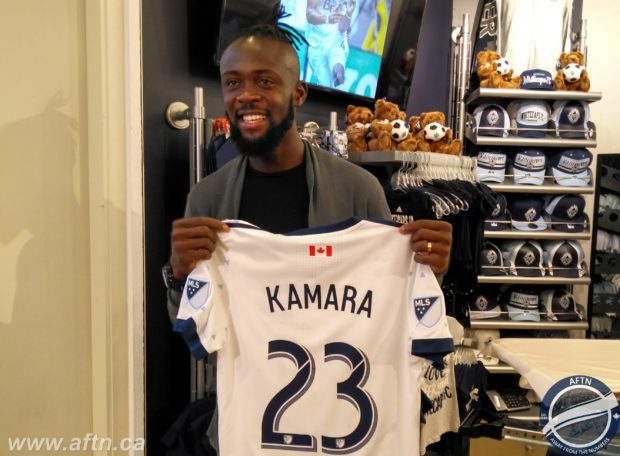 Now the more cynical ones amongst you may feel this is just a veteran player knowing how to win the fans over, get the local media on his side, and create a buzz for his ‘brand”. It’s how he does on the pitch and in the locker room that matters.

That of course is true but if one thing was wildly evident from Kei Kamara’s first in-person media scrum as a Whitecap on Wednesday, it’s that he clearly wants to be in this city, is excited to be here, wants to win trophies, and has a personality that is badly needed in a locker room that’s lost a lot of veteran presence this offseason.

The reasons that Kamara has been brought to Vancouver are two-fold – to score goals and to bring some experience and leadership to the locker room.

With 50 goals in three seasons since his return to Major League Soccer in 2015, the ‘Caps will be hoping the former will be a given. Kamara knows the way to the back of the net and he’s shown it time and again in the league. And while some may point to Kamara’s age (he’s 33), as a worry, for the striker himself, it’s an irrelevance.

“Lots is left,” Kamara feels. “I don’t look at those numbers. I look at goal numbers not the age. I’m enjoying it. I play every minute of every game that I called in to play. I feel good. I still feel I can produce a lot.

“I’m 33. I can’t change that. But I don’t play like a 33-year-old. Mentally I’m not putting myself in to that. Mentally, I’m putting myself in a situation where I’ve been in this league for a good number of years. I’m very experienced from playing on different teams and I’m still missing a championship and that’s my goal.”

And it clearly is.

Kamara has made the MLS Cup with Columbus, won two regular season Eastern Conference titles with Sporting Kansas City and a US Open Cup, won the MLS Golden Boot, been an All-Star, but has never won a MLS Cup, and he badly wants that winners medal as he enters his 12th season in the league.

When he says that’s why he’s delighted to leave New England for Vancouver to do just that, he means it. He feels he can lead both the Whitecaps and himself to that goal, whether the supporters find that a realistic proposition or not.

“What’s enough is really bigger than that, which is winning a championship. Coming here, I don’t want to put too much pressure on myself or my teammates, but that’s what you play for.”

But he will have pressure, and he can’t do it all himself. He needs a strong supporting cast and it’s hard not to look at the current Whitecaps squad and feel that they are actually weaker than last season while everyone else around them in the West have strengthened. But there’s still time to add some more pieces.

Being a Designated Player on a high salary, with a proven goalscoring record in the league, will bring nothing less than pressure. He’s been brought in to score goals. To help others around him, like fellow new addition Anthony Blondell, score goals. To be that long missing target man that is there to bury the multitude of previously wasted crosses into the box.

Kamara’s response to that? Bring it on, “I love playing under pressure”. 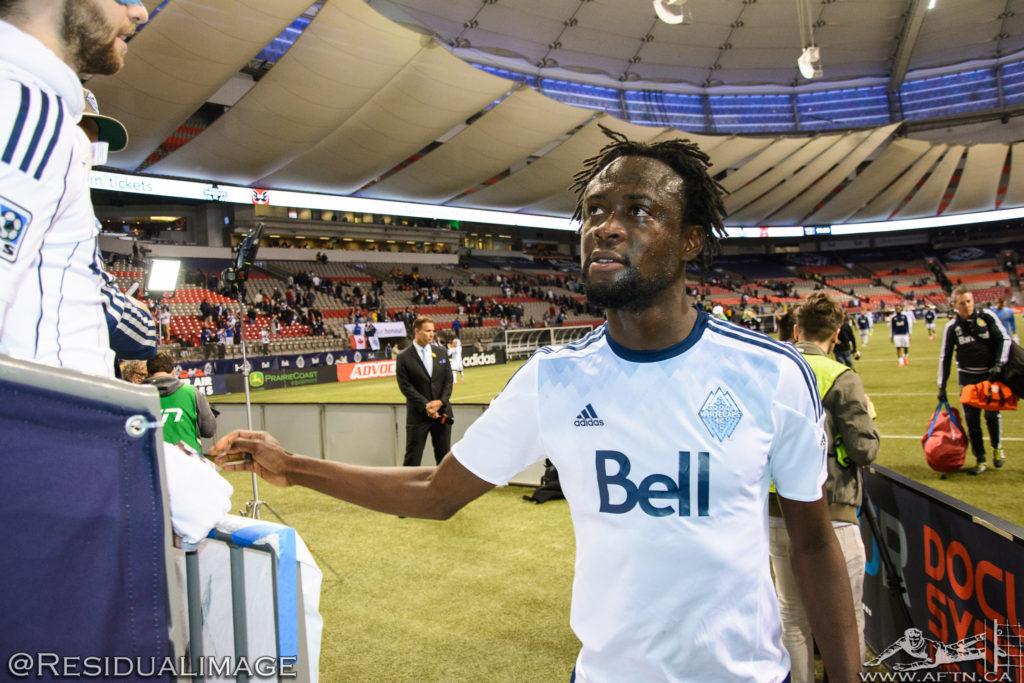 So while it’s clear that Kamara has been brought in to Vancouver to score goals and replace Fredy Montero in that department, it certainly shouldn’t be lost that he’s also been brought in for what he can bring to the locker room. A fact not lost on Kamara himself.

The Whitecaps will be his sixth club. At 33-years-old he’s the oldest current player in the ‘Caps squad, and one of only three in their 30’s.

The Sierra Leone striker brings a wealth of experience, of both the game and the league, to a Whitecaps squad that has lost the likes of Jordan Harvey, David Ousted, Andrew Jacobson, Christian Bolanos, and Mauro Rosales this offseason. That’s a lot of experience and mentors to the younger players moving on in one fell swoop.

Carl Robinson has talked about wanting his squad to get younger and that naturally comes at a cost of experience. There’s a difference between having say a 25-year-old like Nicolas Mezquida in the squad with four years MLS experience and a guy in his 30’s that’s travelled the world, experienced different leagues, and been a consistent high performer and starter. Both are experienced but both have different things to share.

“Coming over, I really know that’s going to be a responsibility,” Kamara told reporters today. “I have to be one of the experienced guys around one of the prospects of the club. Alphonso Davies and players like that, and any other guy that they’re going to draft from the draft.

“I have to be a leader and not worry about what I’m going to do but also be able to carry a few of these other guys around me. I’m looking forward to that. It’s a good task. The coach, Carl [Robinson], I’ve played against him and I know the kind of intensity that he wants. I really want to be part of that, so I’m excited.”

Seeing Kamara as a locker room leader will make some balk. Fairly or unfairly, there a reputation that’s followed him around in recent years that he’s disruptive in the locker room. But define disruptive because I’ve never seen any hard evidence of that actually provided, or what I would class as that.

Has he called out his teammates for underperforming? Sure. Is that a bad thing? Not for me and clearly not for Carl Robinson.

What is a locker room leader anyway? To me, it’s someone that does call out his teammates if they’re underperforming and costing the team results (ala David Ousted and his now infamous “fight on a fucking Saturday” training ground spat with Pedro Morales). Does that mean there’s maybe bad blood between some players and he loses some of the locker room? Probably, but that’s no bad thing either. They’re your co-workers, not your friends.

You need a winning mentality and the ability to be challenged and acceptance of when you’re poor. If you can’t hack or handle that, and can’t take criticism, you shouldn’t be in the game. For Kamara it’s all about accountability as a player, as a coach, and as a front office.

“Players should be players, and coaches and clubs should be held accountable for if it’s not going well, Kamara feels. “That’s the pressure that you want to have as players, or as an organization.”

And that’s how he expects to be treated as well.

“If I’m not scoring goals, put me on the bench,” Kamara added. “It shows me that I’m not doing well and I need to work a little bit harder. I can’t wait.” 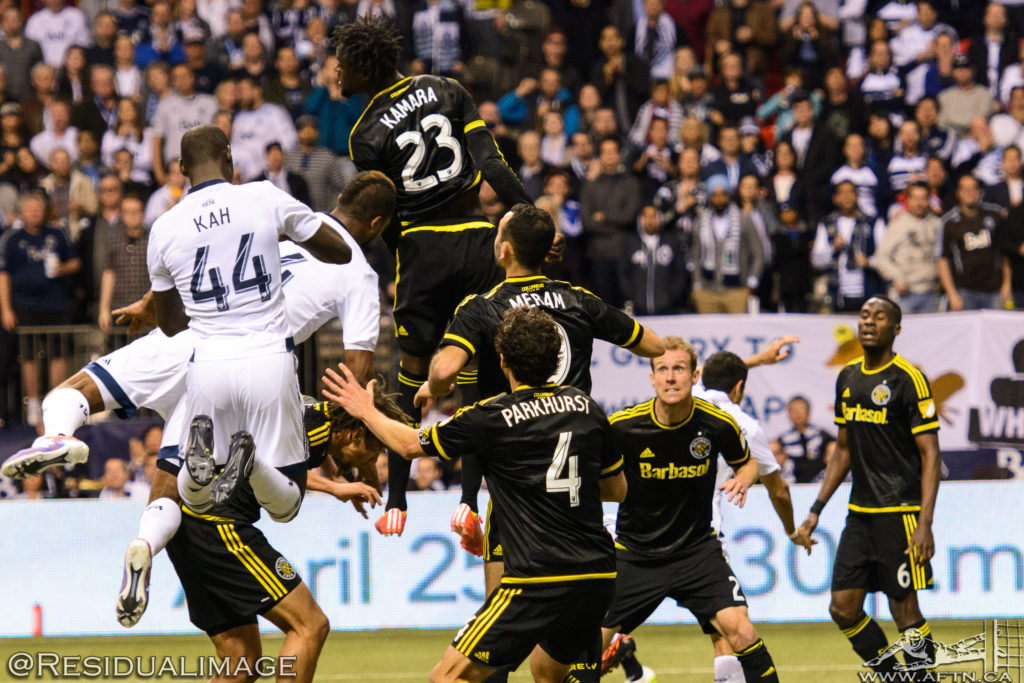 Robinson wanted to bring Kamara into the Whitecaps fold back in 2016, sending Octavio Rivero to Columbus in return. It never happened and New England pounced for Kamara’s services instead, starting what a fairly unhappy time for the striker with the Revolution.

That’s behind him now and he’s just hoping to start anew, finally as a Whitecap and feeling wanted and valued.

That faith, desire, and persistence to have him at the club though, have certainly been strong selling points to the veteran and he’s keen to repay them.

“There’s always going to be rumours,” Kamara said of the previously mooted trade. “I didn’t get a phone cal from anyone and obviously I didn’t come over in 2016 but everything happens for a reason and I think this is the right time for me to come over.

“I’m just happy that the club have that trust in me, even if they were enquiring about me in 2016, that’s great to know that they enquired back then. It shows that they have some trust in you. To me, for them to do all that and then still bring me over here now in 2018, that’s a lot of trust.”