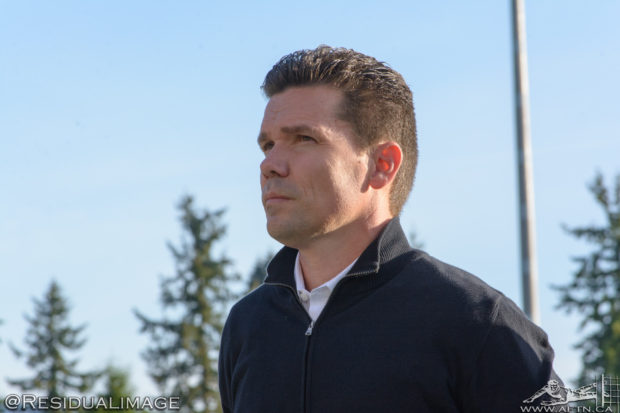 WFC2 are now a third of the way through their second USL season, and they remain unbeaten following a 2-2 draw with Real Monarchs at Thunderbird Stadium on Sunday afternoon.

Ten games in and the ‘Caps sit atop the Western Conference standings on 22 points, two ahead of the second placed LA Galaxy II and with two games in hand. Their points tally is already only eight less than last season’s final total and is good enough to see them sitting second in the overall USL standings.

It’s been a fantastic start to the season, but as we keep reiterating, no-one at the club is getting too carried away, least of all head coach Alan Koch. Sunday’s draw with the Monarchs showed why – the team is still very much a work in progress, albeit a very exciting one.

It took the young ‘Caps a little bit to get going against RSL’s USL side but they found their stride in the 24th minute when Brett Levis laid the ball off to Ben McKendry at the edge of the box and midfielder hit a beauty into the top corner to give Vancouver the lead.

It was 2-0 just 66 seconds later, with Kyle Greig putting away a low Sam Adekugbe cross for his ninth goal of the season.

As the ‘Caps created more chances, which they couldn’t convert, they looked pretty comfortable and you felt that they were home and dry, but a stunning goal from Ricardo Velazco on the stroke of half time gave the visitors some hope and they tied things up with an even better curling effort from Velazco eight minutes into the second half.

WFC2 pushed hard in the second half to get the winner but simply couldn’t break down a resolute Real defence and they had to settle for a share of the points, keeping their unbeaten record in tact, but disappointing Koch at the same time with the lack of consistency his team are regularly showing.

“You’ve got to play for 90 minutes obviously in football, in the most part, to get results,” Koch told AFTN after the game. “I thought we played well at times in the first half. There was a good stretch of around 20 minutes where we scored our two goals and probably could have scored a few more.

“I thought we were a little flat in the first ten minutes and thank goodness they didn’t punish us during that. But they’re a good team and they’re going to play until the bitter end. We played them at their place last year and I think it was in the 97th minute that they scored to tie it up and get a point that day too.

“We’re disappointed because I don’t think we played very well for the full 90 minutes, but we’ll take the positives out of playing well in fits and spurts. The positive is we get to play them again next week right away and hopefully we can put together the good moments for longer periods of time next week.”

More consistency in games is something which Koch has been seeking over the last few weeks. So has Carl Robinson with the MLS side. For WFC2 the problem seems to be keeping their lead and allowing their opposition to get back into games.

The Monarch’s fight back was the fourth straight game that has seen Vancouver jump out into an early lead and looking in control, before seemingly switching off or lacking some consistent pressure to kills games off, allowing their opponents to get a foothold back into matches.

It hasn’t cost them too much, but in the last two games it’s meant a share of the spoils.

“I don’t think it’s anything with us being up or being down,” Koch mused. “We’ve come from behind and we’ve won games when we’ve been ahead too. I think it’s just managing the individual moments.

“They scored two goals today, and give their player credit, he obviously finished them very well, but we gave them all sorts of space and unless you step up and have the courage to make a challenge outside the 18-yard-box, you’re going to give quality players like him that much space and he’s going to score.

“I think it’s the moment. Moments define matches. We’ve got to learn from those moments and let the positive moments count and moment like that we’ve got to step up to the plate.”

There’s been a few wobbles in the defence during the first third of the season, but on the whole they’ve played very solid and been quite settled in the process. The goalkeeper has changed a few times but Sem De Wit and Cole Seiler have marshalled the middle well, with 17-year-old Kadin Chung excelling at right back and Brett Levis thriving at left back (although Sam Adekugbe came in v Real with Levis moving back into his old left midfield role).

But as solid as the defence has looked, the trend is a little more worrying as they start to ship more and more goals. After keeping two clean sheets in their first three matches, they’ve gone a further seven now without keeping the ball out of the back of their own net.

Not as worrying when you’re banging the goals in the at other end of course, but that’s hard to sustain in itself. Koch doesn’t feel there’s too much to read into the goals of late as being a systematic issue with the team, and much like the MLS side, it all comes down to the individuals.

“I don’t think it’s been anything in particular,” Koch feels. “You hate to go back and say certain things we’ve been having with the first team, but certain individual errors at times will punish you. At the back, when you do make a mistake, you’re so vulnerable as a player in the back four or a goalkeeper.

“But we have a lot of confidence in our team when we defend. You’ve seen on the road, we’ve defended fantastically and earned points sometimes when we probably shouldn’t have got the points. We’ve got to learn to grow from that and come together. We are conceding too many goals in the last few games and we’ll have to work on that and try and restrict the number of goals that we are conceding.”

Hard work reaps dividends and that will be true for a number of the WFC2 players after their unbeaten start to the season.

Alphonso Davies, Kyle Greig and the regular USL backline are all likely to feature in the Whitecaps Canadian Championship roster for the game against Ottawa on Wednesday.

Just reward for their efforts so far and Koch has a message for any of them that do make the final roster.

“I think the message for them if they go to Ottawa and they play in that game is exactly the same as if they play in a USL game,” Koch told us. “If you get an opportunity, take it, and that’s it.

“It’s the same if you play a USL game or ACC or Champions League or MLS. When you get that chance, you better be ready for it, and that’s the hard part. We train every single day to prepare the players for those games. That’s the importance of training. Get yourself ready and when you have a chance, make sure you’re ready to take it.”