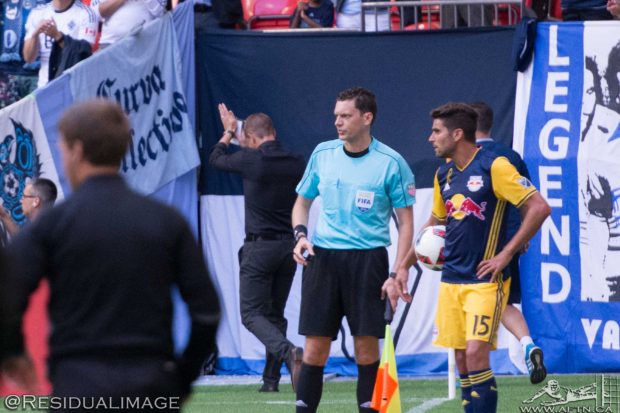 Saturday was pretty much a day to forget for Vancouver Whitecaps. With their playoff hopes already hanging by a thread, New York Red Bulls may have been the scissors to deliver the final cut after a 1-0 victory at BC Place.

After missing chances galore, it was a frustrating afternoon all round for Vancouver, who remain four points off the playoff places in the West with games fast running out. Adding to those frustrations was the ejection of ‘Caps coach Carl Robinson on the stroke of half time for what referee Sorin Stoica said afterwards was for “acting in an irresponsible manner”.

That wasn’t, as you may think, for starting Erik Hurtado and playing him for the full 90 minutes, as Stoica indicated he’d previously warned Robinson and the Whitecaps bench twice about their behaviour on the touchline, before sending the ‘Caps coach off when it continued.

“At the 18th and 42nd minutes of play, Mr. Robinson was warned after he verbally dissented and unusually gesticulated his disagreement to the decisions of the referees,” Stoica clarified to the pool reporter after the match. “At the 45th+1 minute of play, Mr. Robinson continued verbally and visually dissenting the referee’s decision and was dismissed from the technical area.”

Robinson left to a standing ovation from the Whitecaps fans in attendance, applauding the supporters as he headed to the locker room.

The referees on the other hand got a three man security detail to get them off the pitch at half time, choosing to depart at the halfway line at the final whistle.

On the television broadcast you can see and hear Stoica come over to the ‘Caps bench in that 42nd minute and say if hears anything from the bench “one more time” then that will be it. And it was.

It was a decision that left both Robinson, and New York head coach Jesse Marsch, baffled after the game. So will the ‘Caps coach appeal?

Robinson was joined in the stands for the second half by assistant coach Gordon Forrest, who seemed to also get ejected. But he got the backing from his New York counterpart Jesse Marsch, who felt the referee was wrong and from what he saw and heard, Robbo did nothing wrong.

“For me, I don’t think Carl was acting egregiously or obnoxiously,” Marsch told reporters after the game. “Maybe he was trying to make a point about a couple of calls, but I didn’t think that warranted a tossing. The league is making this emphasis about bench behaviour and coaches, so I guess we have to find a way to be alter boys on the bench.”

Marsch has had his own run-ins with referees these past couple of seasons, with a couple of fines and suspensions as a result, and he’s a coach very well known for being demonstrative on the touchline.

In fact, it would be hard to find any coach (and some owners) in the league who hasn’t at least spoken out about some of the terrible decisions by MLS referees this season. PRO? You’re having a laugh. Far from being professional, or competent.

Hopefully the owners, managers committee and the players union can get together this offseason and force some change going forward. For the league to continue to grow and garner respect you have to have a better refereeing product on the park.

Far too many times this season, in games all over the league, the referees have been the talking point coming out of matches. It can’t continue.