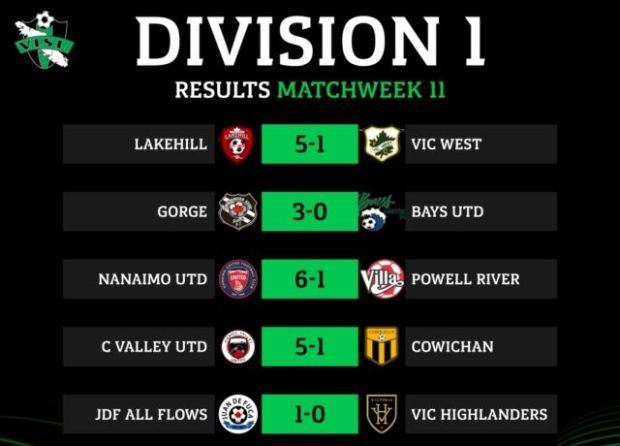 Week 11 will go down as a very odd week in local amateur men’s soccer on the island. Even with the Malahat closure, gas inventory, and the Lantzville sinkhole, (all of which created some rescheduling challenges) all games ended up being played.

The weekend had the most lopsided of scores that we have seen this year to date in Division 1 of the Vancouver Island Soccer League.

Friday started out with a bang as runaway league leaders Lakehill put down Vic West 5-1 thanks to a hat-trick from Blair Sturrock and a brace from Craig Gorman. The solo Vic West goal came from Salem Almardy.

Saturday saw Powell River come into Nanaimo and they were defeated 6-1. Declan Brown, Jonathan McKenzie, and two goals apiece from Matthew Mehrassa and Caleb Nwameme did the damage for Nanaimo. The lone goal from Villa came from Marcus Cramb.

In the only low scoring/close game of the weekend, Juan de Fuca Allflows slipped by the Victoria Highlanders 1-0, with the only goal of the game coming from JDF’s Ethan Emile, while Cody Carter secured the shutout.

So after all of that action, the VISL Division 1 standings are as follows: 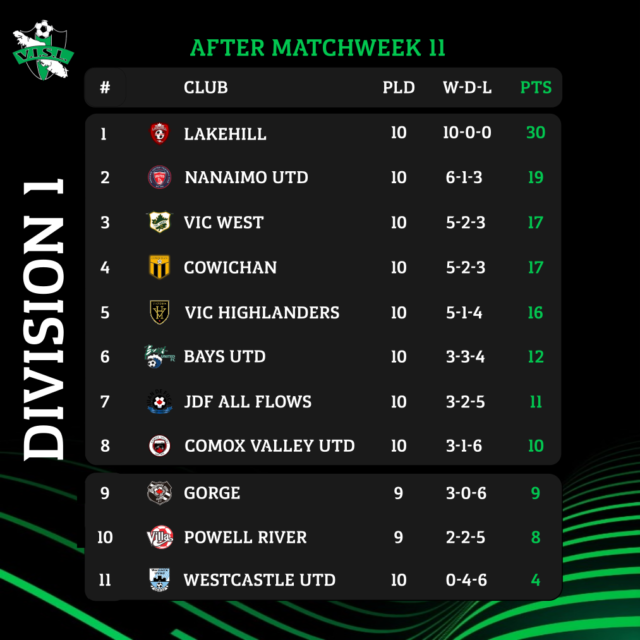 Lakehill convincingly stays in 1st place with their undefeated record – being perfect at 10 wins, no draws, no losses. Being clear of the next team by 11 points, they appear to be running away with the division.

A Nanaimo win, coupled with some other teams losing, allows them to vault ahead and jump into second place.

The battle at the bottom part of the division took a turn as three teams from the bottom half won, instantly moving them up the standings and making for an interesting second half of the season to come.

Individually, as far as guardians of the goal, Cody Carter moves up the leaderboard with his impressive performance, but Lakehill’s Hardeep Gahunia continues to lead the way on three clean sheets.

The scoring race took a very interesting turn on the weekend, especially with what took place at the Lakehill game. Blair Sturrock takes over sole possession at the top thanks to his hat trick, leaving that Golden Boot leaderboard looking as follows: 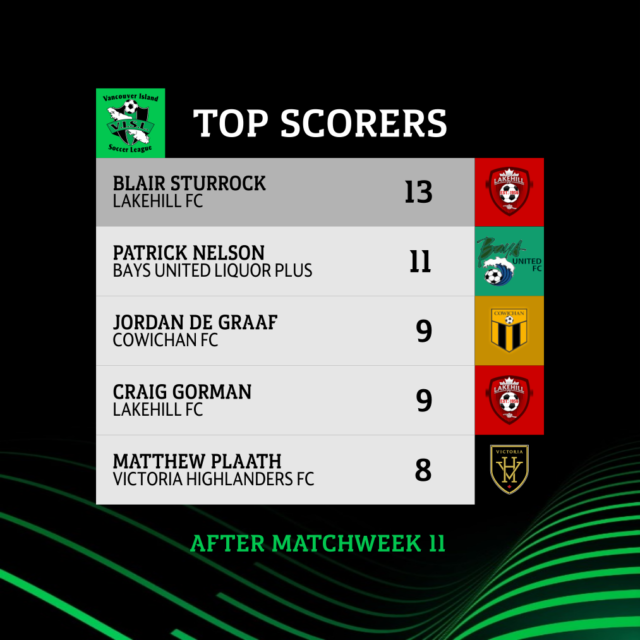 A tough weekend for some. Adjustments being made to the schedule were received and handled better by some teams, and that is part of the process and procedures for the league. Hopefully, there’s some normalcy in the upcoming weeks. We continue to remind ourselves how fortunate we are to live in this part of the world, and how lucky we are to be participating in the sport we love.

This weekend’s fixtures are also open to the possibility of disruption, but fingers crossed everything goes ahead as planned.

Friday starts off with a roadtrip up the new and improved Malahat as Bays Utd goes to Merle Logan to face Nanaimo. Nanaimo will be tough to beat at home, and are coming off a convincing win against Powell River. Bays are coming of a shutout loss to Gorge and they will need a solid effort to pull off a little upset over a hot Nanaimo.

Friday also sees red hot Gorge hosting Vic West at Hampton Turf. Gorge were dead last for a while, but are now riding a three game winning streak. Another win puts them right in the middle of the pack. Vic West are coming off a tough loss to Lakehill, and they will look to get back on track to keep pace near the top.

Saturday has a not so typical afternoon affair at Braefoot as Lakehill hosts Comox. Lakehill are hot, undefeated, and running away with the division. Comox are going to need an astronomical effort to defeat the division leaders, but stranger things have happened!

Here’s what the full slate of fixtures looks like this weekend. 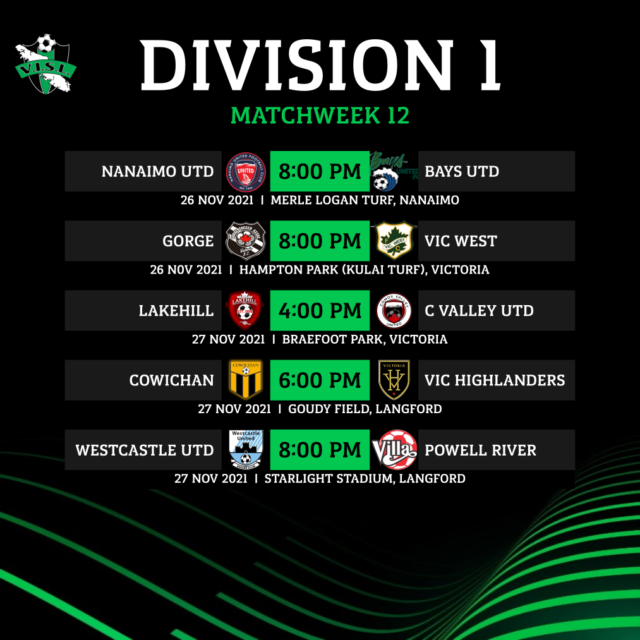 Should be an interesting weekend, the standings will most certainly change, and no doubt there will be plenty to talk about at coffee time on Monday.

Thanks for supporting local grassroots soccer and people in your community.