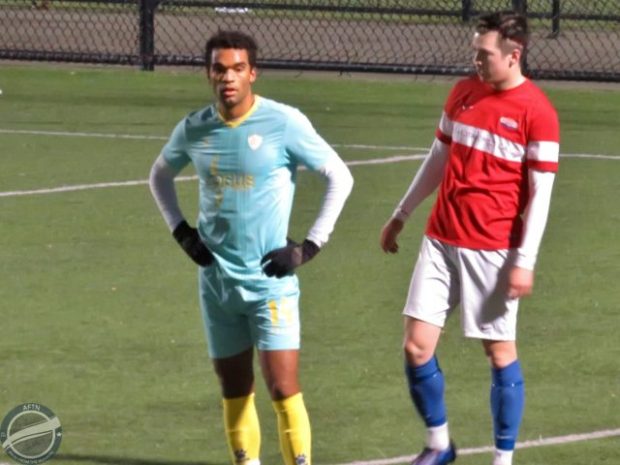 It was another interesting weekend of action in the Vancouver Metro Soccer League (VMSL) Premier Division, with the new leaders already losing their top spot, the old leaders retaking it, a lot of bunching up amongst the top five, and the bottom three starting to look cut adrift and in a mini battle of their own to avoid relegation.

But with the league just reaching the midway point, there’s still a lot of football to be played.

Coquitlam Metro Ford Wolves had hit the summit last weekend after BB5 United’s match had been abandoned due to foggy conditions. They held a slim one point advantage as they took to Ted Fridge Field on Friday night to face off with West Van FC, and the old foes served up an entertaining five goal thriller to kick off the weekend’s action.

Both teams had exchanged some early chances, but with 24 minutes on the clock, the visitors opened the scoring when Bryce Millway got the ball just inside the box, turned beautifully to make room, and fired past the Coquitlam keeper to give West Van a 1-0 lead that they took into half time, despite the home side pushing hard for an equaliser.

Metro Ford got back on level terms five minutes after the restart when Ryan Ashlee poked the ball home after West Van failed to deal with the danger from an inswinging free kick. The league leaders then had a string of chances to go ahead, but they all went abegging and it was West Van who retook the lead in the 66th minute when Aidan Izadi was played in and fired home.

The Wolves fought back again, tying things up with a deflected Carlo Basso effort with five minutes to go, but there was still a twist in the tail to come and Millway got his second of the game two minutes into stoppage time to give West Van the 3-2 victory and saw Metro Ford’s rule at the summit become a short lived one.

Metro Ford’s defeat presented BB5 United CCB with the chance to regain first place in the standings and it was an opportunity they seized with both hands at Newton Stadium on Friday evening with a 2-0 win over Croatia SC.

And it could and should have been a lot more as BB5 dominated the match from start to finish and missed a slew of chances, especially in the first half, to put the game to bed early.

Nic Morello had the ball in the net in the opening minutes when he put away a rebound from a Caleb Clarke shot that had been saved, but the flag went up quickly for offside. BB5’s leading scorer wasn’t to be denied though and he grabbed his 11th of the season when he rose unchallenged to head home a corner in the 16th minute.

Clarke saw an effort crash off the post eight minutes later, but despite creating a number of chances, the Surrey side had to be content with a one goal lead at half time.

Croatia were moving the ball forward well, but BB5 were dealing with everything thrown at them in the final third fairly easily and were looking the more likely team to add to the scoring as the second half played out. And that proved to be the case when Elie Gindo secured the points for BB5, heading home another corner in the 66th minute.

You can see AFTN’s highlights from the match below and on our YouTube channel:

That win sent BB5 back to the top of the table, giving them a two point lead now over Metro Ford and with a game in hand.

Friday night’s other match saw an absolute humdinger at Newton Athletic Park as BCT Rovers Hurricanes edged out Burnaby Selects White Eagles 4-3 in a game that saw the visitors fight back with 10 men before agonisingly falling to a last minute winner.

Brady Weir had put the Hurricanes ahead in the 12th minute before Hayato Kamiya tied things up in the 34th minute for the White Eagles. Parity was just to remain for four minutes as Rahid Rahiem sent the Surrey side in with a 2-1 lead at the half. Then the action really heated up.

Andrey Kolobov was sent off for the White Eagles for the denial of a goalscoring opportunity on the hour mark, and Nick Soolsma fired home from the spot to extend the Hurricanes’ lead. But the ten men from Burnaby fought back and remarkably tied things up with two goals in two minutes. Matlash Vladyslav made it 3-2 in the 64th minute, before Mladen Ljumovic sparked jubilant scenes when he made it three apiece less than two minutes later.

But just when it looked the White Eagles were going to come away with a point, up popped Soolsma to grab his second of the game, and a VMSL Golden Boot leading 12th of the season, to give the Hurricanes all three points and continue their steady climb to 8th in the table.

Saturday’s match saw a big six pointer of a relegation battle at Feb Burdett Stadium in North Vancouver and it was the home side NVFC Norvan who grabbed their first victory of the season in a crucial 1-0 win over SFC Pegasus.

Those three points saw Norvan close the gap to 10th placed Pegasus to just one, and they sit tied now with MAFC Elite at the bottom of the table on six points.

MAFC are winless since week 3 of the season, but have just been a close second in a number of their losses this year. They need a bit of a run to get them out of their current predicament and they must have thought that they had turned a corner when they went two up against Rino’s VSC Coastal at Burnaby Lake on Sunday evening in the opening 20 minutes.

Diego Govantes had put MAFC one up from close range in the 18th minute and Alham Nazaryar doubled their lead with a low long ranger into the bottom corner just two minutes later. But a late collapse was to be their undoing.

Jake Starheim pulled one back for Coastal seven minutes into the second half and Nicholas Pineda Graham completed the comeback with 16 minutes remaining. Three minutes late and Coastal took the lead when Cameron Kamensek fired home through a crowd of bodies in the box to give Coastal the 3-2 victory, cementing their third place in the table.

MAFC now face a relegation dogfight with NVFC Norvan and SFC Pegasus. With two automatically going down and the third bottom facing a playoff game, these three teams need to start stringing some wins together.

The other match this past weekend saw Inter EDC beat VUFC Hibernian 3-0 up at UBC in a battle of the midtable teams.

So all of those results leave the VMSL Premier standings as follows at the halfway point of the season: 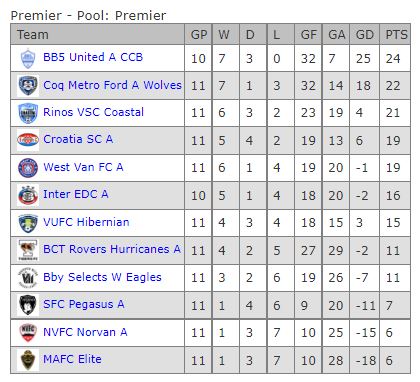 The second half of the season gets underway tonight, with six matches coming up over the next three days. Here’s what’s in store: 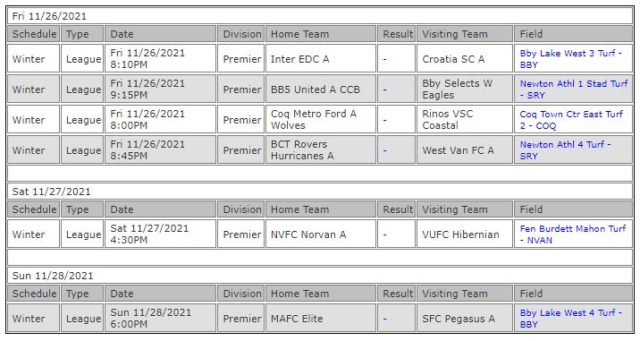