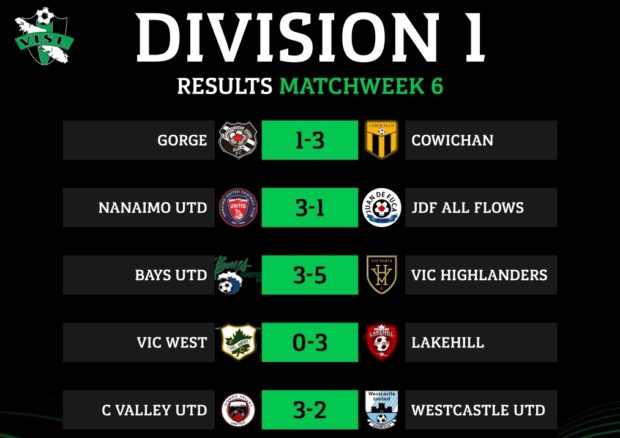 Week 6 of the Vancouver Island Soccer League (VISL) 2021/22 season is in the books, and a third of the league campaign has now officially been played.

At the top, unbeaten Lakehill continue to lead the way with their 100% record so far, but Victoria Highlanders are breathing right down their neck, waiting to pounce on any slip up from the league leaders. But don’t feel this is simply a two horse raise as both Nanaimo United and Cowichan both have a game in hand and will still fancy their chances of making a run at the title.

At the other end of the table, Gorge are still pointless at the foot of the standings, four points adrift of safety.

The week six action kicked off on a busy Friday night with a spirited affair that saw Cowichan defeat Gorge 3-1.
Cowichan goals were by Darian Harris, Jordan De Graaf, and Michael Daniels, while the loan marker for the home squad was Mike Dunham.

Nanaimo United took care of business at home, defeating Juan de Fuca Allflows 3-1. Nanaimo goals were by Caleb Nwameme, Declan Brown, and Callum Magog, while the JDF goal was the first one of the game, and it was scored by Devon Austin.

There was a goalfest at the next match as Victoria Highlanders outgunned Bays Utd 5-3. Fardin Azizi, Leonard Enekegho, Matthew Plaath, Rhys Pufong, and Wyatt Davis were all on target for the Highlanders, with Connor Legge, Kiyoshi Croke, and Patrick Nelson scoring for Bays.

Saturday saw one game North Island and it was Comox slipping by Westcastle by score of 3-2. Comox goals were by Rio Crystal, Emile Abele, and Joe Butcher on the last play of the game. Westcastle markers were from Ydrisa DaSilva and Yassin Guitouni.

All of those results leave the VISL Division 1 standings as follows: 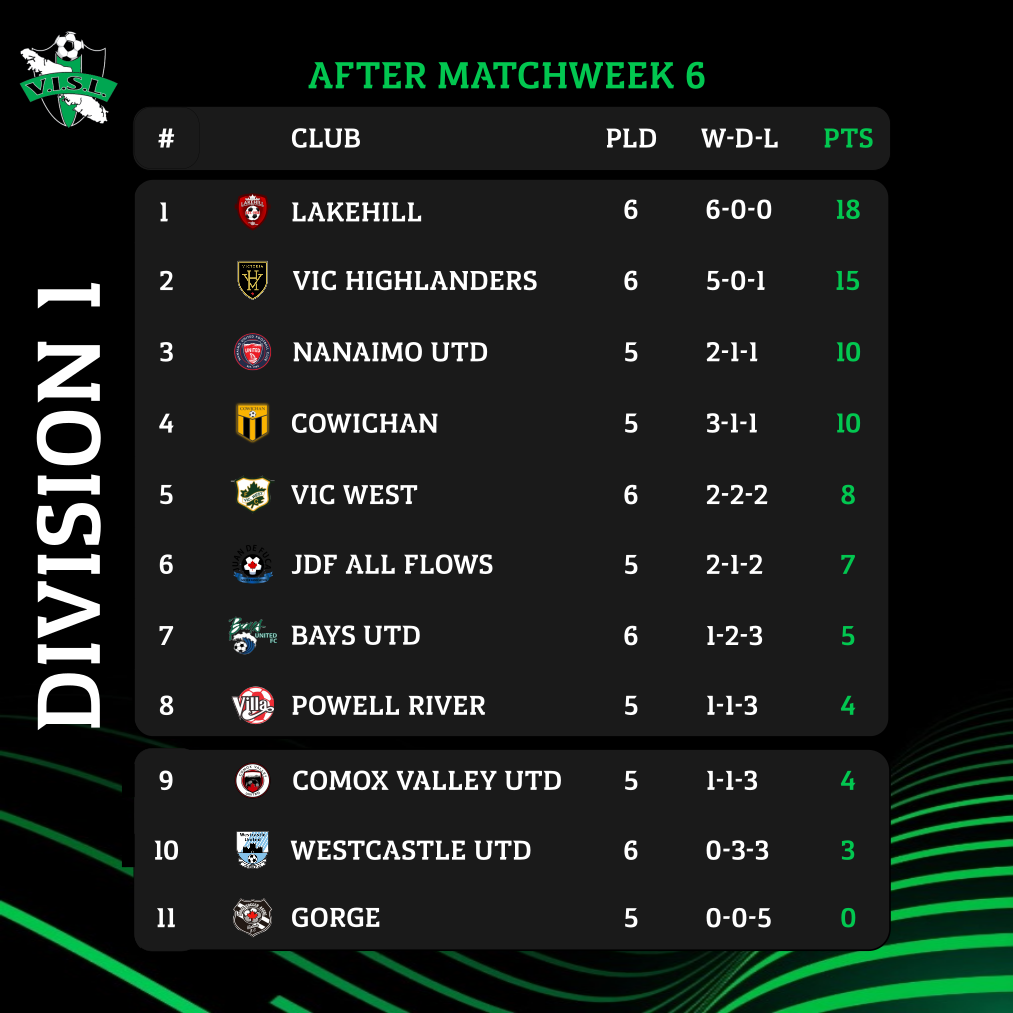 The clean sheet department saw a change this weekend as Hardeep Gahunia notching another in the Golden Gloves department to take sole position of top spot.

In the race for the Golden Boot, almost all of the top scorers added one to their tallies, leaving that leaderboard as follows: 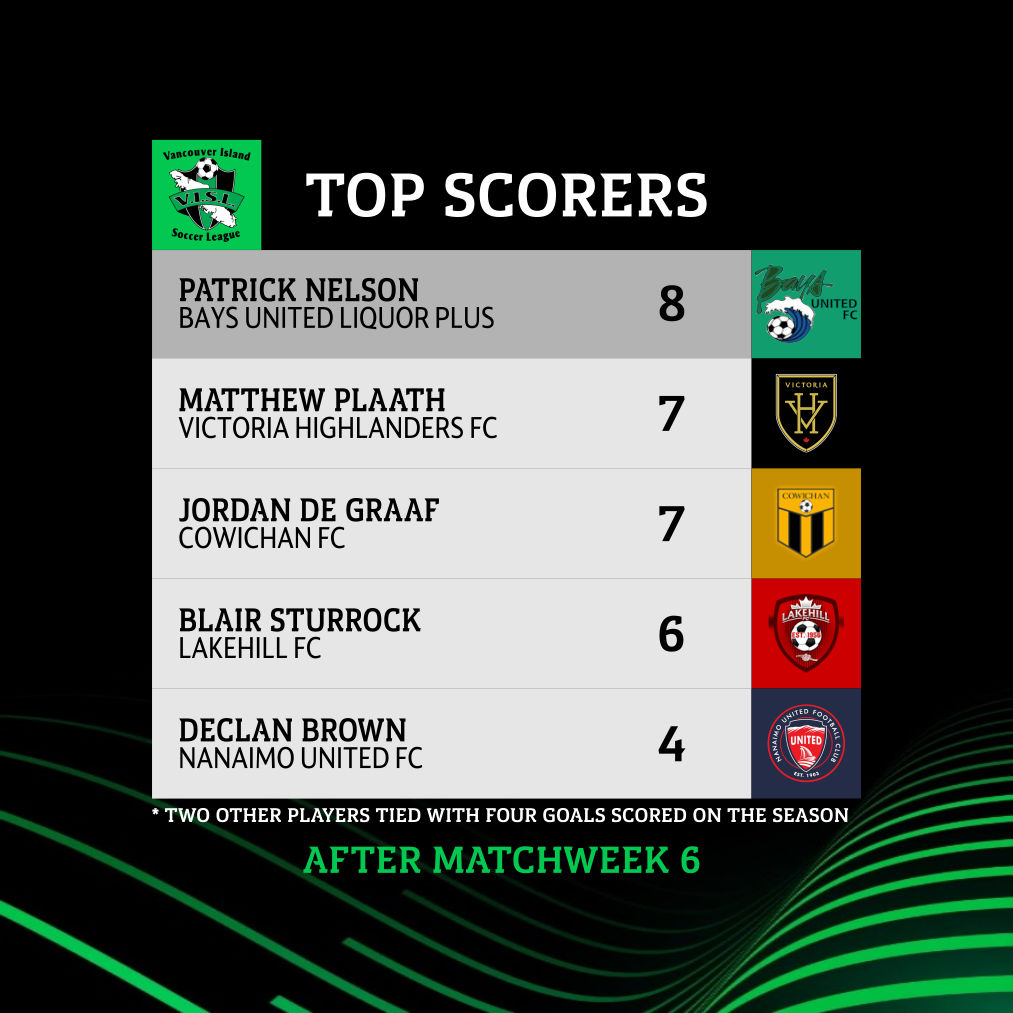 Nervous tension is in the air as Match Week 7 is approaching for the top flight of amateur soccer on the Island.

Friday gets started with the young Victoria Highlanders team taking on the limping Vic West squad. Both teams were expected to be at or near the top according to most, but the Green have run into some tough times in the first third of the season. Starlight Stadium will host these two teams, a game that could potentially speak volumes to what shapes out for the reminder of the season.

Friday will also see a dandy in North Cowichan as Nanaimo Utd comes into town to take on Cowichan FC. A big game for both teams as Cowichan has been getting results, and also for Nanaimo as they feel they will a contender for the division’s championship – the Garrison Cup. Cowichan will need to be firing on all cylinders to take down a strong Nanaimo team.

Friday wraps up with Lakehill hosting Westcastle at Braefoot. Lakehill at the top, Westcastle near the bottom – both teams better show up though as this game could surprise if players do not play it out. Lakehill looking to keep their perfect record, while Westcastle looking for their first W of the season.

Saturday will just have the one matchup as Comox host Gorge. Nothing to skirt around here – Gorge have been snake bitten and will look for their first result of the season to get them out of the cellar. Comox will want to earn some points to move up the ladder and clear away from the relegation zone.

Sunday sees one game as well as Juan de Fuca Allflows host Powell River Villa. Both teams have had some results and shown times of brilliance and both will want to walk away with three points for sure.

Bays will have a weekend off.

Here’s what’s in store in VISL Division 1 this weekend: 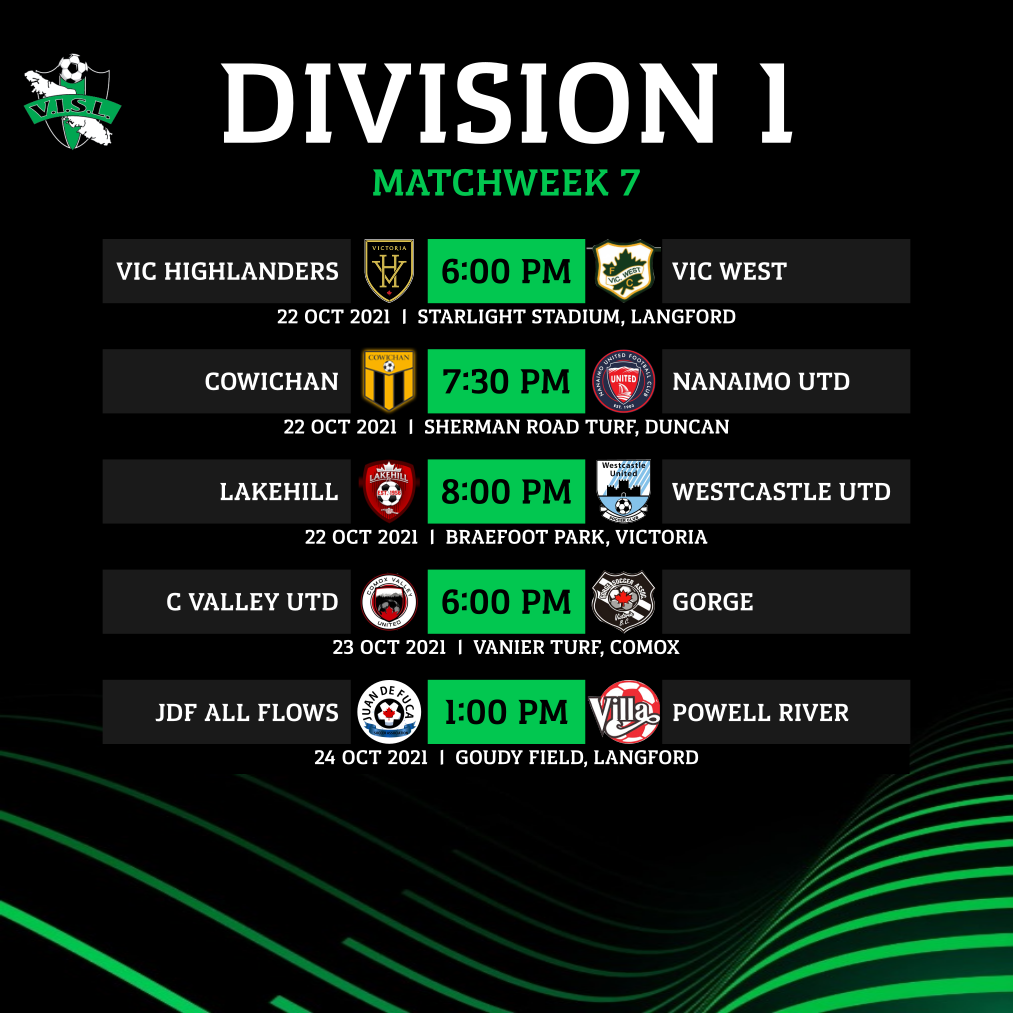