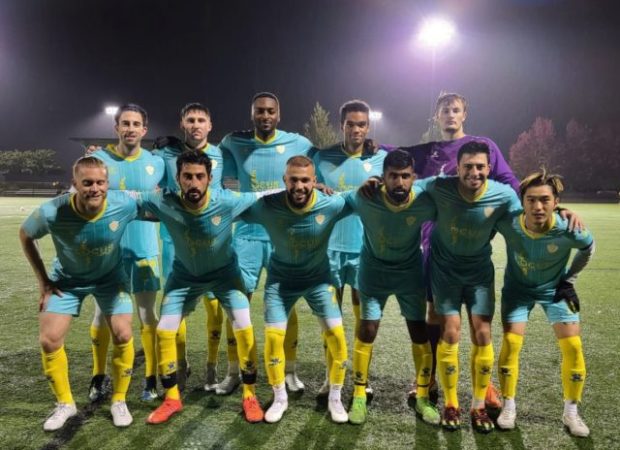 The top two teams are starting to extend their lead at the top of the Vancouver Metro Soccer League (VMSL) Premier Division after the Week 6 matches, with BB5 United CCB and Coquitlam Metro Ford Wolves continuing their impressive starts to the new season, but they have Croatia SC and a VSC Coastal side, who are starting to find their feet in the league, chase them down.

BB5 came away big 6-0 winners at Newton Athletic Park on Friday night to stay in first place thanks a hat-trick from Nic Morello that moved him into second place in the race for the Golden Boot in the process. Boris Si hit a brace and Caleb Clarke got on the scoresheet against as well, his 7th goal of the season, one ahead of Morello.

That victory kept BB5 unbeaten for the season and moved them onto 16 points, still one ahead of Coquitlam Metro Ford Wolves, who were big winners themselves at Burnaby Lake on Friday evening, 5-2 over Inter EDC in what was then a 2nd v 3rd battle. Juan Sanchez hit a brace for Coquitlam, with Jovan Blagojevic, Kyle Summerhill, and Ryan Ashlee also on the scoresheet for Wolves. Inter’s goals both came from recent signing, and former Whitecaps academy player, Massud Habibullah.

The mid-table battle at Ambleside on Friday night saw Rinos VSC Coastal move up to fourth in the table after a 2-1 win. Sean Norcote and Nick Baronian were on target for Coastal, with Eoin McCormack grabbing West Van’s goal.

Friday’s action was rounded off with BCT Rovers Hurricanes moving off the foot of the table following a 3-1 win over MAFC Elite at Newton. Nick Soolsma was on target for the Hurricanes again, taking his tally to the season to five, as was Pavi Dhillon, with MAFC also scoring in their own net. Kareem Shoudy grabbed MAFC’s goal, as Hurricanes move level with them on points in the relegation battle.

Sunday’s action saw Croatia SC see off VUFC Hibernian 3-1 at Burnaby Lake thanks to goals from David Malamura, Graeme Meers, and Ivan Salvov. Liam Robinson hit his third of the season for VUFC.

The weekend wound up with Burnaby Selects White Eagles 1-0 win over SFC Pegasus at Burnaby Lake thanks to a 79th minute goal from Stefan Cuk.

The full VMSL Premier Division standings after the Week 6 action are as follows: 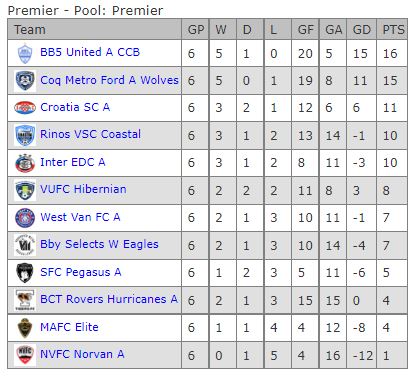