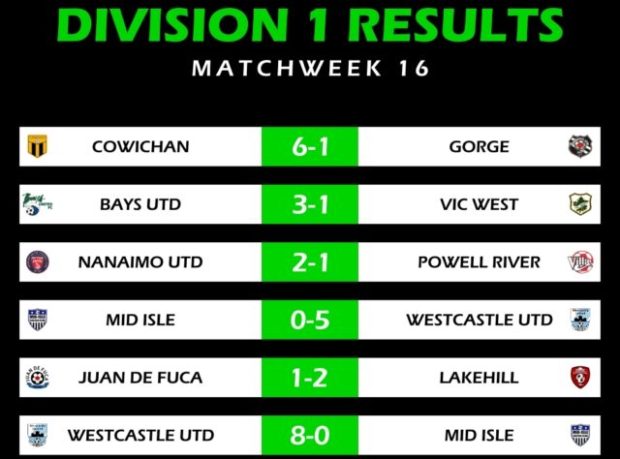 Week 16 of Vancouver Island Soccer League (VISL) Division 1 action is in the books, and we were finally able to get back into regular programming for our top flight of soccer on the Island.

It’s still looking like a two horse race with three matches to go, but you can never count out five-time defending champions Cowichan FC as they look to hold onto their title in the run-in.

This past weekend’s action certainly produced a goalfest for fans.

Friday got going with a surprising bang as Cowichan dismantled Gorge 6-1 in Duncan. Doubles from Craig Gorman and Adyn Lamont, and goals by Steven Scott and Billy Bagiopoulos, got the job done for the defending champs, with the lone reply for Gorge coming in the 90th minute from Edward Lawson.

At UVic, it was a 3-1 win for Bays over Vic West. Justin Donaldson and Patrick Nelson with two. earned Bays the three points, while scoring the solo for Vic West was Liam Wirth.

Saturday had an interesting start as Powell River visited Nanaimo. The hosts came away with a 2-1 win after goals by Shun Takano and Paddy Greig. The Powell River marker was an own goal by Nanaimo.

Saturday also had Mid Isle hosting Westcastle, and they were shutout 5-0. Kadin Martin-Pereux, Noah Lechelt, Boland Leleaka, and Keenen Colley with two were on the scoresheet for Westcastle, while earning the shutout was Sachdev Grewal.

Saturday night also had league leaders Lakehill travel out to Westhills and face Juan De Fuca All Flows and get what may prove to be a huge 2-1 victory for them, thanks to an injury time goal by Blair Sturrock, Tarnvir Bhandal netted the other for Lakehill, while Christian Hauff was the goalscorer for JDF.

An extra make up game was played on Sunday, and it was not a pleasant game for some.

Mid Isle came down island for the second game of the home and home series and were defeated by Westcastle by score of 8-0. Boland Lekeaka hit a hat-trick, with the other goals scored by Sean Young, Kayden Miner, Stuart Klenner, Goteh Ntignee, and Maurizio Abdi. There was another shutout for Sachdev Grewal.

So after all those games, here are the current standings: 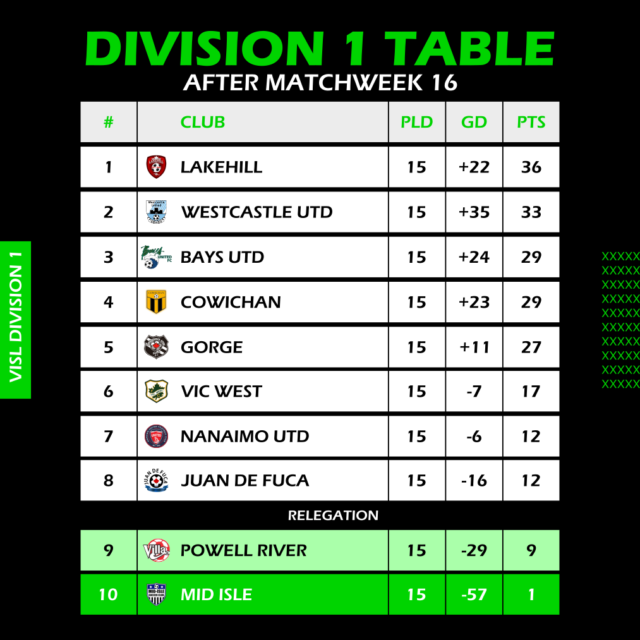 A scare for the leaders as Lakehill might have saved their season with a late goal over JDF. This will become evident if Westcastle are able to defeat the leaders for a second time this year.

Westcastle jumped into the solid second place spot by earning all six points over Mid Isle. There are still undefeated, just with too many draws.

Bays and Cowichan stayed the course by earning victories – that will make for a fun head to head game in two weeks.

At the bottom end of things, we now can guarantee that Mid Isle will be in the relegation zone. The question remains – will Powell River be able to get out of the 9th spot? Can they catch JDF or Nanaimo?

With a lot of goals over the weekend, here is what the goal scoring leader board looks like with Keenen Colley still leading the way: 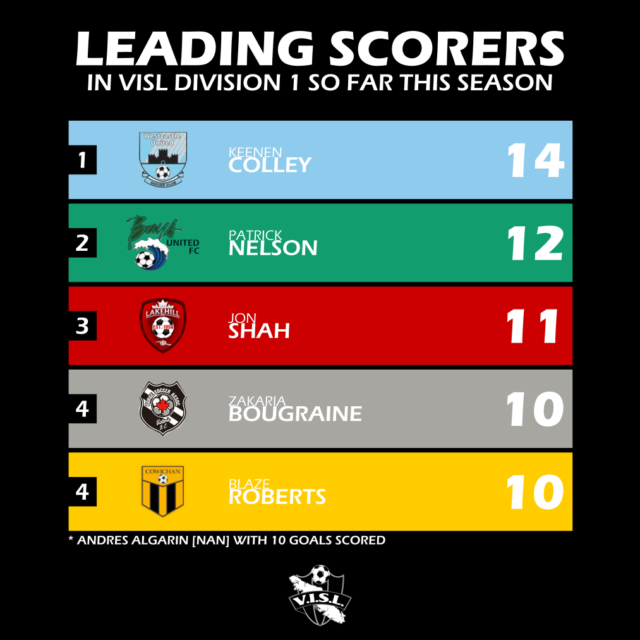 Moving on to the goalkeepers, here are the guys that have earned the most shutouts to this point. There is a possibility of Sachdev Grewal being recorded with another, so that would put him in the lead.. 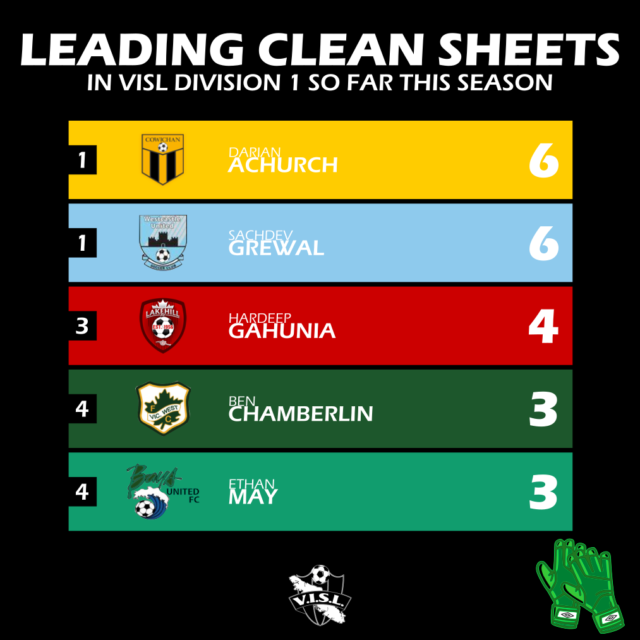 All the players and management were happy to be back at it. It was a long break, and there are still many stories to unfold.

Remember you can get all the news, results, and fixtures across all the divisions at