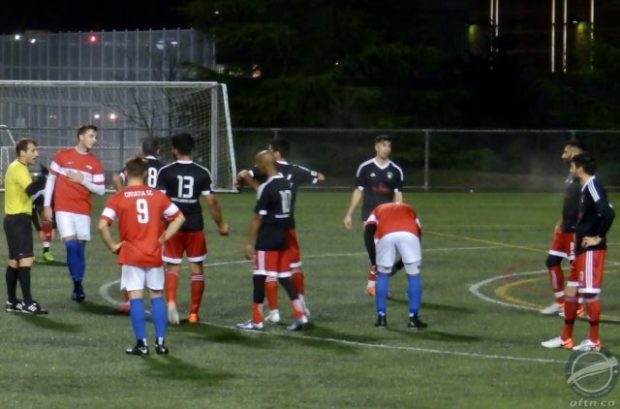 It’s looked like a two horse title race in the Vancouver Metro Soccer League (VMSL) Premier Division for the last few weeks between defending champions Croatia SC and Rino’s Tigers. And as the snow cleared and the football got back to being played, last weekend’s results cemented that, with the top two pulling away with a couple of victories and the two teams in the chasing pack falling to defeat.

With Rino’s keeping their narrow lead at the top with four games to go, and Croatia sitting a point behind with a game in hand, this is a battle that looks likely to be going down to the final game of the season. 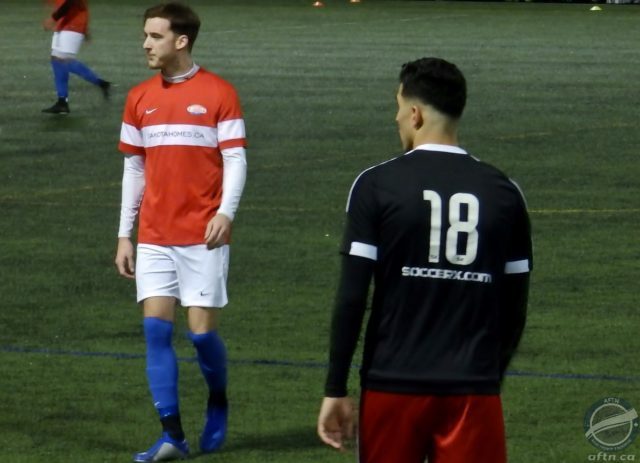 Kai Vockeroth put Croatia into a second minute lead but Yassin Essa finished off a well worked goal to pull Pegasus level in the 32nd minute.

A tenacious David Malamura never gave up on a chance and fired Croatia back into the lead six minutes later and that was how things stayed until the half.

The Surrey side came out strong to start the second and Kerman Pannu ran in on goal and tucked away a nice finish to bring Pegasus back level once again four minutes after the restart.

The game really could have gone either way, with both teams keen to attack, but it was Croatia who were to get the winner when Emile Saimovici tucked the ball home a minute past the hour mark to secure what could prove to be three big points for the defending champs.

Here’s our highlights video from Croatia’s win (we were just coming in as the first goal was scored but the rest are there!).

That victory moved Croatia back to the top of the standings, albeit just temporarily, and puts them in a strong position to retain their title over their last five matches.

Friday night’s other game was out at Newton, with goals from Ryan McCurdy and Caleb Clarke giving CCB LFC United a 2-1 win over Club Inter EDC Burnaby, who played the second half a man down after Jordan Michael was sent off for offensive language.

Saturday’s afternoon game saw NVFC Norvan and Coquitlam Metro Ford Wolves play out a 1-1 draw, with both goals coming within a minute of each other. Devin O’Hea put Norvan in front in the 38th minute, only for Carlo Basso to equalise immediately for the visitors.

The Saturday night game at Burnaby Lake saw the death blow dealt to West Van’s title hopes as they went down to a 3-2 defeat to Guildford FC FASA, giving them some hopes for avoiding the drop in the process.

Ramsey Alfantazi gave FASA a 16th minute league but they were pegged back six minutes before half time from a Keith Jackson goal for West Van.

Aflantazi gave FASA the lead again in the 70th minute only for Alan McIndoe to level 11 minutes later. But FASA weren’t to be denied and Alftantazi completed his hat-trick and secured the victory in the 89th minute.

Sunday saw the team that were the league leaders heading into the weekend, Rino’s Tigers, in action up at UBC and they finished it back on top after a 4-0 demolition of BCT Rovers Hurricanes.

A first half double from the Golden Boot leading Farivar Torabi in the 15th and 38th minutes had the Tigers two up at the interval, taking his individual tally for the season to 26.

Erik Edwardson made it three in the 63rd minute and bagged a brace with a penalty three minutes from time.

The final game of the weekend saw Burnaby Selects White Eagles play out a 0-0 draw with bottom side ICSF Columbus at Burnaby Lake, a point that sees them four points clear of FASA in the relegation battle.

So after all of those results, the VMSL Premier Division league table looks as follows: 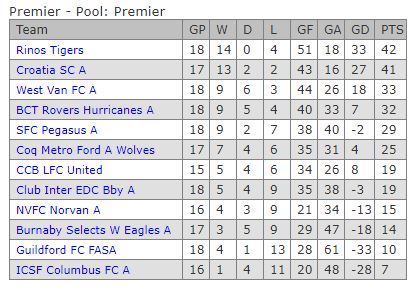 The both league and Imperial Cup fixtures this weekend. You can find all the fixtures, results, and standings across all the VMSL divisions at VMSLsoccer.com, and don’t forget to head over to the TakeThePiss forums for all your football banter.