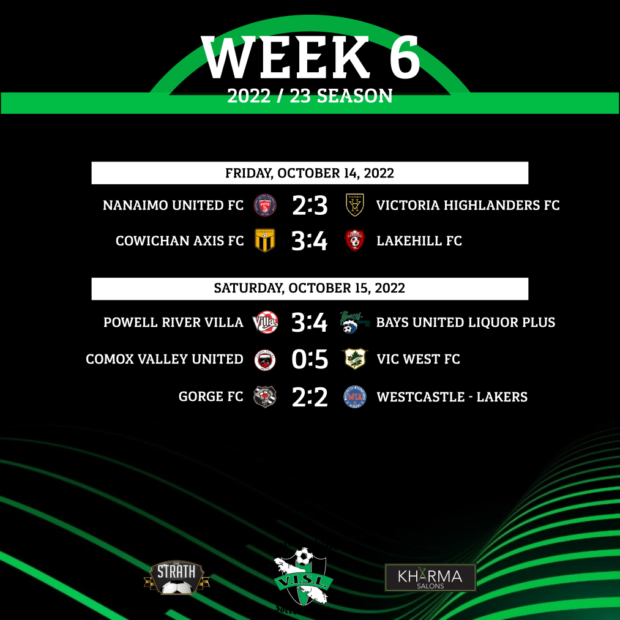 A third of the season is officially in the books for the Island’s top flight of men’s amateur soccer, VISL Division 1.

Like some of the local elections on the weekend, there were some surprises and shocking results to report after all the votes, or at least the goals, were counted.

Here is a snapshot of those results.

Friday night started at Nanaimo’s Merle Logan Turf, and the visiting Victoria Highlanders drove over the Malahat into another riding, and stole three points from Nanaimo United. Elijah Bean, Holden McLeay, and Kiezik Jameson did the damage for the Highlanders, while both of Nanaimo’s goals were score by Daragh Fitzgerald.

Friday also saw Lakehill edge out Cowichan 4-3 and there was some late match ballot counting happening there as Lakehill scored two goals in the last two minutes to snatch the victory from Cowichan. Lakehill goals came from Blair Sturrock, Wesley Barrett, Craig Gorman, and Tanvir Bhandal, with Mateo Kostering, Connor Crichton, and Colin Knight on the scoresheet for Lakehill.

Saturday started out with a bang as 10 man Bays Utd went to Powell River and beat a 11 man team by score of 4-3. Bays had goals from Ian Sanford, Alexander Murphy, Lloyd Larsen, and Tarik Almardy, while Powell River goals were from Griffin Leach, Brody Harry, and Jan Kenmuir.

Saturday also saw Vic West travel to Comox and come out with a 5-0 win. Vic West goals by Andrew Pearse. Kaelan Cooke, Kyran Collins, and a brace from Salem Almardy. Earning his second shutout of the season was goaleeper Rafael Guerrero.

Saturday wrapped up with a surprising result as Gorge and Westcastle battled to a 2-2 draw. Gorge had goals from James Cameron and Matthew Olaka. Westcastle tallies were from Mateo Hilton and Devin Austin.

After all scores double checked and scrutinized by the secret committee, the standings were updated to show the following. 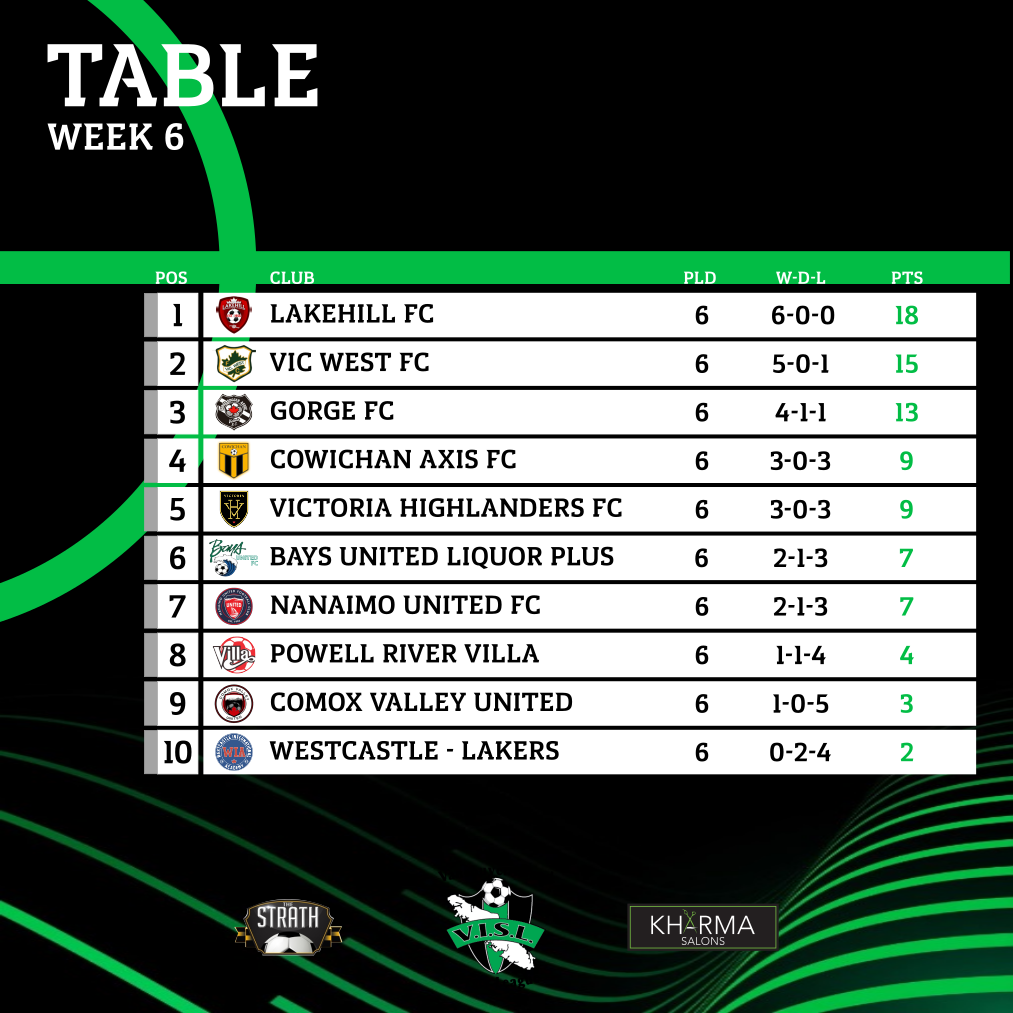 So Lakehill avoid a snap in their unbeaten streak and remain on top of the division. Vic West keep pace and hope that they can get back at Lakehill, who are just ahead of them. The Gorge blip drops them down a bit, but they are still relevant.

There is a log jam with the next four teams because of some surprising results, while the bottom three are tight, and that looks like it will be a tough battle all year to avoid the drop.

As far as clean sheets go, the leaderboard for shutouts has an adjustment as Rafael Guerrero of Vic West joins Hayato Matsuba of Gorge as a leader with two apiece.

And then there is the goal scoring race to capture the Golden Boot. It has been altered a bit and a little green joins the top red boys. 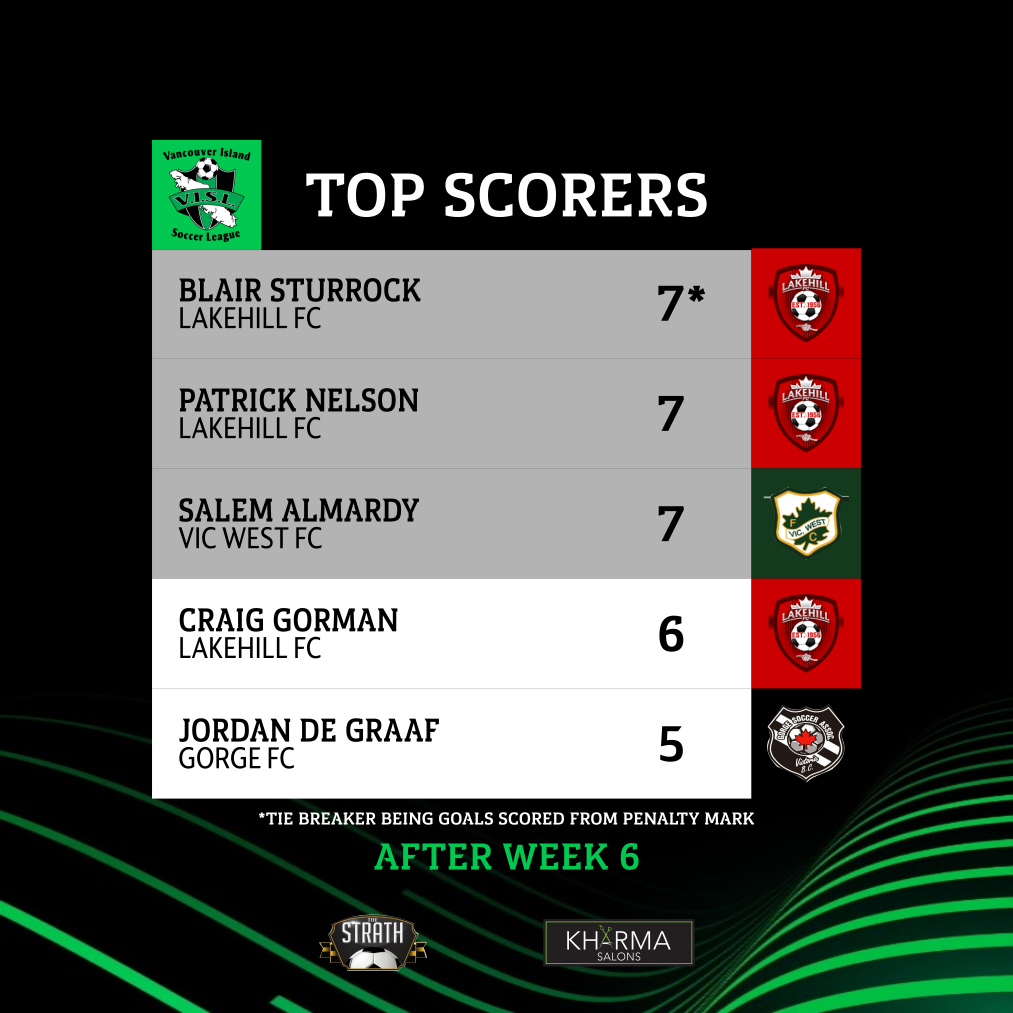 Week 7 of the VISL Division 1 action will be the focus of all local soccer this weekend.

It is not the halfway point of the season yet, but some feel this is a pivotal weekend as divisional placements will be affected in so many spots.

There is a full set of five games happening, and here is what it looks like. 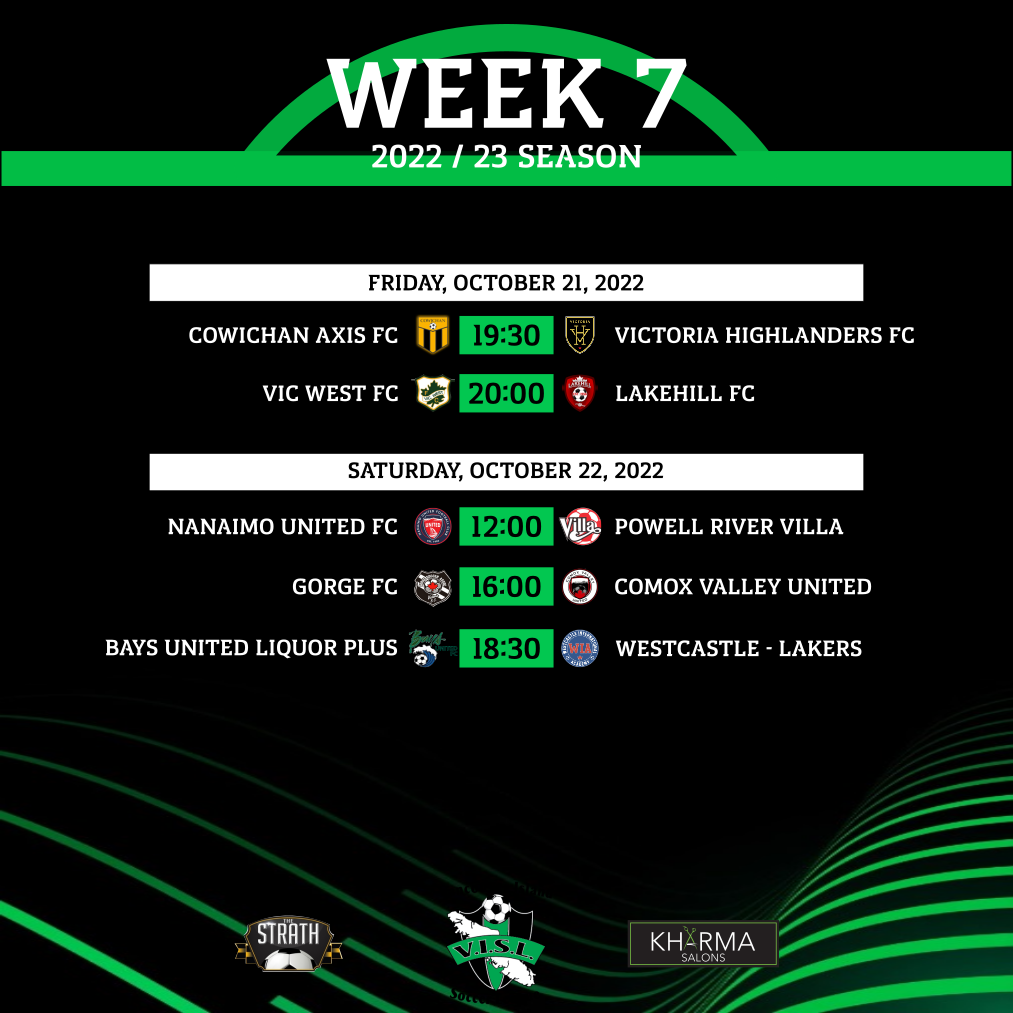 Friday is a hot night, and it starts in North Cowichan as Cowichan Axis host the Victoria Highlanders. Cowichan are coming off a heartbreaking loss to the division leaders while the Highlanders are coming off a big win of their own
Who knows which way this will go, but it should be a dandy. Cowichan will be short their power forward Blaze Roberts due to suspension.

Friday also sees Vic West FC host Lakehill. This game will take place in Sooke as it is Vic West’s part time home because they are homeless with the closure of Finlayson. This is a big match as it is second versus first. This could provide valuable space between the two teams, or it could make them all even. It should be a high temperature, high heat game.

Saturday kicks off with Nanaimo United hosting Powell River Villa. Both teams are coming off tough starts, especially Nanaimo, the defending Jackson Cup Champions. A valuable three points are up for grabs, especially for Powell River as they look to separate from the teams in the relegation zone.

Saturday also has Gorge FC hosting Comox Valley at Hampton Park. Gorge are coming off a tough game as they drew against the last place Westcastle squad. Comox is coming off a couple tough games as they have been defeated handily two weeks in a row.

Saturday wraps up with the ever surprising Bays Utd hosting Westcastle. Bays are coming off a cinderella type road trip as they defeated Powell River, in Powell River, with only 10 men. Westcastle is riding a high of their own as they drew upper tiered squad Gorge. Monster points on the line for sure.

Should be an exciting weekend of grassroots soccer – no matter which neighborhood you are in. Thanks for getting out to the fields, supporting those that work, live, and play in your community all year round.