This past week saw the first two games in a week of the season for some teams, giving two Canadian players, Tesho Akindele and Karl Ouimette, two starts each during the busy spell.

In total, nine Canadian players saw MLS action in Week 7, playing a total of 772 minutes, the most gametime so far this season.

Six of those players started for their teams, with four of them playing the full 90 minutes.

Montreal’s Wandrille Lefevre saw his first minutes of the year, coming on as a half time sub in the Impact’s 2-1 win at Chicago, managing two shots, one of them on target.

FC Dallas’ Tesho Akindele was the sole Canadian impact player this past week, with both a goal and an assist in his side’s 3-1 first half demolition job at Portland last Wednesday.

You can watch both below.

In the updated season so far standings, Vancouver’s Fraser Aird continues to lead the way in appearances and overall minutes played, making his sixth start and seventh appearance of the year in the ‘Caps 1-0 loss at RSL.

Tesho Akindele and Cyle Larin are tied with three goals apiece, while Akindele also has the most assists with two. Will Johnson leads the Canadian players in shots (13), while Larin leads in shots on goal (7).

Here’s the full ‘Canadians In MLS’ totals after week seven. 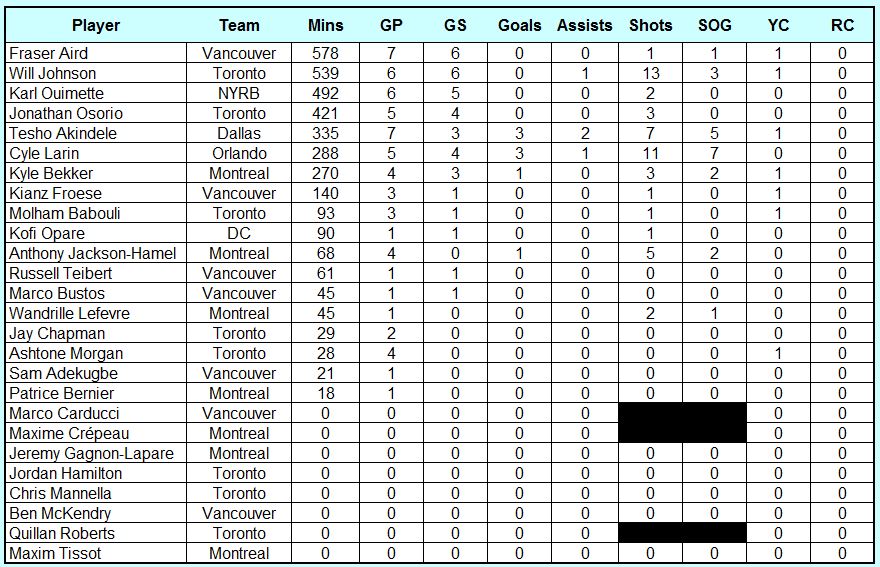