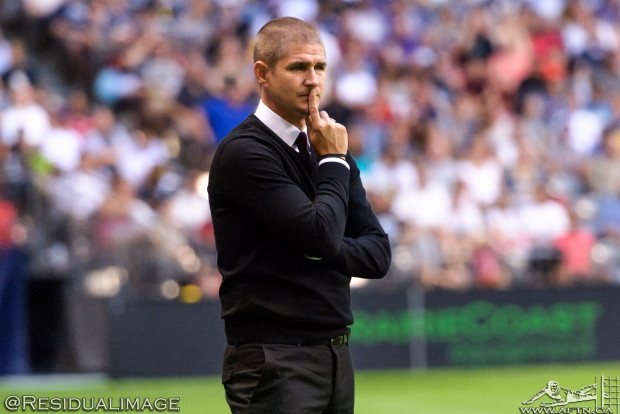 Another game and another less than stellar performance where the Whitecaps didn’t have much of a chance in hell of winning from the time the referee blew the opening whistle. It’s hard as supporters of this team to see these lacklustre results time and time again, yet expecting a different and better result every time.

With the impending departure of Octavio Rivero down to Colo-Colo and the injury to Masato Kudo, it leaves the cupboard bare for attacking options. With Blas Perez sitting on the bench the past three games and having Carl Robinson starting Erik Hurtado, it has people questioning why Perez isn’t starting for this team.

The biggest problem this season has for sure been the overall defensive effort of the back four on the pitch. This game wasn’t any different for the Whitecaps. All the defenders seemed to be one step too slow and one step too far away from the Galaxy forwards. Kendall Waston was too slow to Robbie Keane on the first goal and Jordan Harvey was caught behind when he got bumped on the second Galaxy goal.

With the high number of games coming up in July it is time for this team to get their shit together or it’s going to be a long slide down the Western Conference standings and they might dig a hole that they can’t get out of.

Let’s take a look at The Good, The Average and The Bad: Galaxy Full of Crap Edition…

With the transfer window opening Monday, and the moves that will hopefully be made by Robinson this summer, can it get any worse? It can’t, can it?

Octavio Rivero is gone. Do they have a decent replacement lined up to come in? Will this replacement make an immediate impact? No-one really knows the answer to this question. All we know is the Whitecaps won’t be spending huge money on a world class striker.

Maybe it is time to give some of the USL players some quality MLS minutes. Kyle Grieg, Daniel Haber and Alphonso Davies all deserve a MLS contract. The Whitecaps could make space on the roster by getting rid of Erik Hurtado, Deybi Flores and Jordan Smith. All three of them have struggled this season and aren’t making positive impacts for this team.

The Whitecaps Effort This Season

The beginning of this season I picked the Whitecaps to finish in second place in the Western Conference. Boy was I wrong about this team. I had high hopes based on how they finished last season. After seeing the quality of play so far in the first half of this year, I can see the Whitecaps finishing between 5th and 7th to end this season.

Their lack of defensive quality will be the biggest hurdle for this team to overcome in the second half of the season. If it means bringing in a Marcel De Jong or David Edgar and moving out a Jordan Smith, Jordan Harvey or even Kendall Waston, it could shake the team up enough to give them the kick in the ass they are needing.

In the midfield it seems that the pair of Matias Laba and Andrew Jacobson are not gelling like Robinson hoped for when he made the move to bring Jacobson in. Could Russell Teibert be moved on to give more minutes to Kianz Froese? With Ben McKendry getting more MLS gameday squad opportunities, there is a log jam at defensive midfield and these young Canadians need a chance.

Two mistakes and two goals against for the Whitecaps defenders last night.

On the first goal, once Steven Gerard found Robbie Keane so wide open, Kendall Waston was too far away and didn’t step up properly to get in the way of the shot. This isn’t the first time Waston has done that this season.

It is looking more and more like Waston has caught Jay DeMerit disease this season in MLS. DeMerit was too physical in the eyes of MLS referees and he was too slow in parts of the game. All of these made DeMerit retire from MLS when his game no longer suited the play in the league.

This season Waston is in the same boat, he is being punished for his size too often. Every time someone he goes up against falls down, he gets called for the foul. Other than dominating on clearances in the air, the rest of his game is a few steps too slow in and around the box.

The second goal was a play where Jordan Harvey needed to be more physical and man up. Too many times this season the opposing team has scored and all the Whitecaps defenders do is bitch, whine and moan to the referees after the fact.

Plain and simple it is time for these Whitecaps players to stop messing around, work as a team and get their goalkeeper a clean sheet and continue moving forward from there.