Quite the weekend for Canadian teams and players. Vancouver beat the MLS leaders 3-0 and Toronto got the better of the 401 derby with a 2-0 win in Montreal. While elsewhere, Canadian players were involved in all sorts of goals and controversies in New York Red Bulls 3-2 home win against Orlando City.

In total, ten Canadian players saw MLS action in Week 8, playing a total of 646 minutes, the most gametime so far this season.

Six of those players started for their teams and played the full 90 minutes, and there was one goal, one own goal and an assist involving Canadians this week.

Montreal’s Maxim Tissot saw his first minutes of the year, coming on as a first half time sub, just 20 minutes in, during the Impact’s loss to TFC. Russell Teibert made a massive two minute appearance for Vancouver, but that was “bettered” by Toronto’s Mo Babouli who managed one whole minute!

Orlando’s two goals in their 3-2 loss in New York both came courtesy of Canadian players. One from each team! Cyle Larin opened the scoring just three minutes in, before the Red Bulls hit back with three unanswered goals. Karl Ouimette brought the game back to within one again when he turned the ball into his own net with six minutes remaining.

You can watch both below.

Ouimette shouldn’t even have been on the pitch for that goal to happen after being involved in the game’s most controversial moment when he brought down Larin in the 63rd minute, as his Canadian teammate raced in on goal. The tackle was just outside of the box, but referee Hilario Grajeda didn’t even give the foul, allowing Ouimette to dodge a bullet and a red card. New York then scored the equalising goal two minutes later and they didn’t look back after that.

Judge for yourself the merits of that missed call.

63' Bendik launches a drop kick to Cyle Larin who is alone up top. He is taken down in the box, but no call. pic.twitter.com/YOfHIOUqeT

Will Johnson got his second assist of the season on Sebastian Giovinco’s second goal for TFC in Montreal.

In the updated season so far standings, Vancouver’s Fraser Aird continues to lead the way in appearances and overall minutes played, making his seventh start and eighth appearance of the year in the ‘Caps 3-0 win against Dallas and taking his minutes for the season to 668.

Cyle Larin leads Canadians in MLS with four goals so far this season, while Dallas’ Tesho Akindele and Toronto’s Will Johnson lead the way with two assists each. Larin also leads the Canadian players in both shots (16) and shots on goal (9).

Here’s the full ‘Canadians In MLS’ totals after week eight. 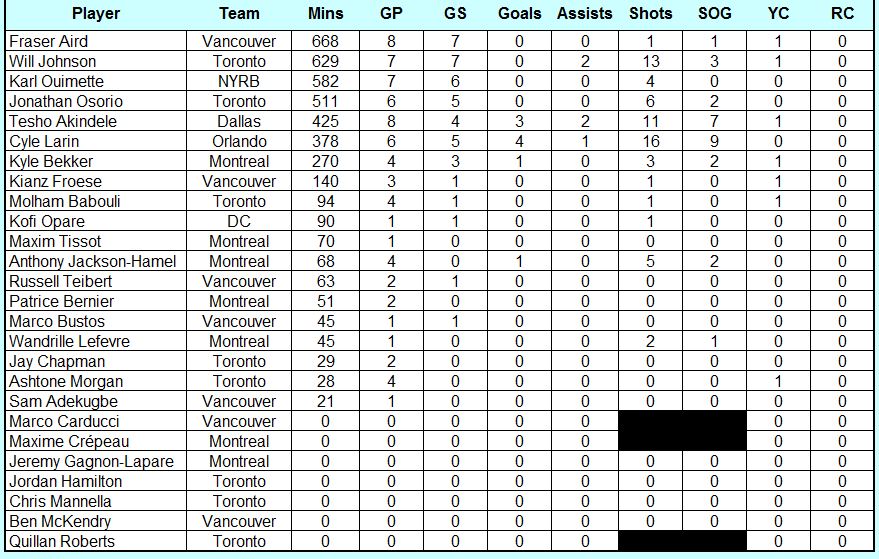