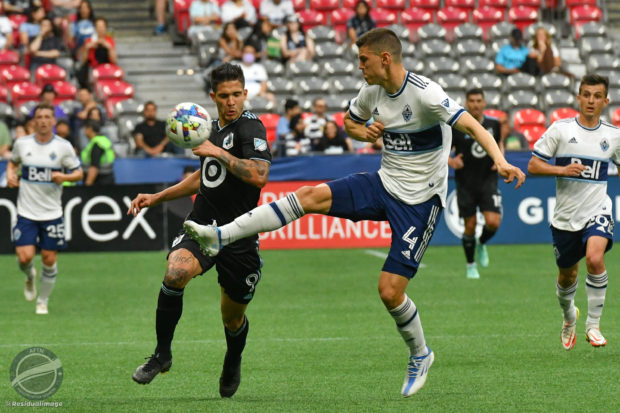 Vancouver Whitecaps’ 2022 season has been a bit of a roller coaster. From the absolutely horrendous first few weeks, to the high of winning the Canadian Championship and a proper playoff push, to everything seemingly crashing down only to be followed by a last-minute winning streak and a symphony of perfect scoreboard-watching results…there’s been a lot to soak in.

2023 will mark a new era for MLS, with the new massive Apple broadcast rights deal and the beginning of the Leagues Cup. For the ‘Caps, next year will also begin with the CONCACAF Champions League, their first appearance in the tournament since 2016.

There’s the chance that after Sunday afternoon, all eyes will be looking ahead to February and what next year will bring. But, perhaps improbably, a win over reeling Minnesota on Decision Day would send the club into the playoffs for the second straight year.

Now, despite having the momentum of three straight wins, the ‘Caps are very far from a shoo-in to make it. All of those wins were at BC Place, where the team has been pretty strong overall with a record of 10-4-3. On the road, however, the ‘Caps are a dismal 2-10-4, and have not won away from home since the middle of June.

When it comes to who Vanni Sartini will turn to in this all-important match, the lineup feels fairly set in stone for the most part. In fact, the 2-0 win over Austin last weekend was the first time in Sartini’s tenure that the ‘Caps have used the same starting XI for back-to-back matches. There’s really only one spot that’s a big question mark, and it’s who the starting number nine will be.

Brian White played the first hour of last weekend’s match and put in a standard 2022 performance for him with some solid hold-up work but not looking as dangerous as you would hope around the goal. When Lucas Cavallini entered for the first time since his suspension, he received boos from an audible portion of the crowd. Then he scored minutes later, and those boos turned to cheers.

Sartini has an interesting decision on his hands, as this recent run of wins has come with White soaking up most of the minutes up top, although on an individual level Cavallini has had a better season than him (when he’s not busy getting himself into fights). Perhaps the Canadian striker will once again be used in a super-sub role to keep the lineup intact, but it would not be surprising in the slightest if he was in from the off.

Also up front will be Ryan Gauld, who has been the talisman in the stretch run once again for the club. The Scotsman has five goals and three assists in his last eight matches and has been fantastic to watch as he’s found his form at the perfect time. Someone else who has found their form is Pedro Vite who looks a completely different player compared to even just a couple months ago. The tweaking of formation seems to have done him wonders as he and Gauld drift around the pitch to find pockets of space and link the attack.

At the back, Jake Nerwinski has turned in his most solid run of performances this year as he’s moved back to more of the right-back role he’s played in most of his time in Vancouver, while Luis Martins has been a sparkplug on the other flank. Thomas Hasal has had some up and down moments since returning from injury but showed flashes of commanding play against Austin which the ‘Caps will desperately need in a tough road environment.

Looking at the hosts, at the end of the summer Minnesota seemed like they would be able to cruise into the playoffs, but then dropped off a cliff and enter Sunday having lost five of their last six matches, outscored 14-2 over that span. This freefall has coincided with centre-back Bakaye Dibassy suffering a season-ending injury, and midfielder Robin Lod is also listed as questionable to play having missed the last two matches.

These two sides met at BC Place back in July, a match that resulted in a gut punch of a 3-1 win for Minnesota. The ‘Caps have yet to record a win at Allianz Field, with a 0-2-2 record since the Loons joined MLS.

The Whitecaps have gotten all they could have asked for when things looked bleak a few weeks ago: they have their destiny entirely in their own hands. Win and they’re in. Lose, and so ends a sometimes-maddening season. I’m sure the MLS scriptwriters are quite proud of themselves.