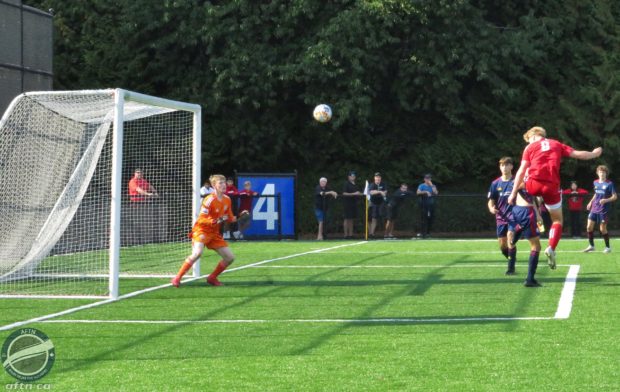 It’s been a glorious week of weather at the Canada Soccer U17 Nationals at Newton Athletic Park in Surrey and it’s brought out some glorious footballing action in both the boys and the girls sides of the competition, with hosts Surrey United looking set to be playing in two medal games on Thanksgiving Monday.

Both Surrey teams are BC Provincial Champions and the girls will be challenging for a bronze medal if they can secure a point in their final group match against New Brunswick’s CS Dieppe today. For the boys, the colour of the medal they will be going for will be decided in today’s semi-final match up with Alberta Provincial champions BTB Soccer Academy, in what could be one of the most entertaining games of the tournament, and certainly one of the loudest in the stands.

That game kicks off at 2.30pm on Sunday, with the first semi-final set to go at noon in an Ontario v Quebec battle between Glen Shields and CS Saint-Laurent.

Here’s how all four teams got to this stage and how the week played out. 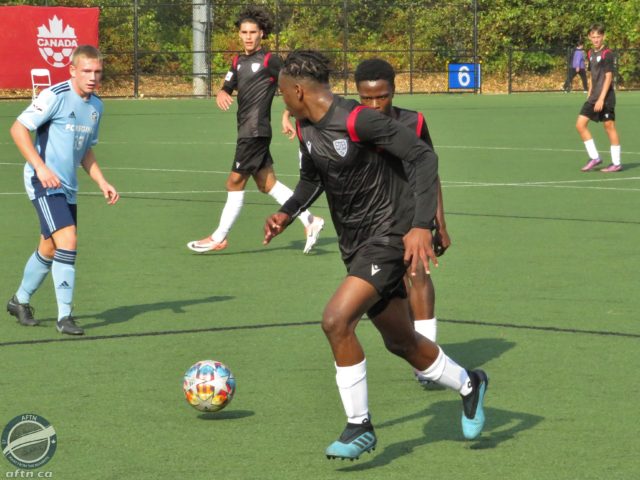 Edmonton’s Born To Be (BTB) Soccer Academy have been a breath of fresh air in the Alberta youth soccer scene, but they’ve had one hell of a battle to get there (check out the excellent three part documentary about their struggles on YouTube).

After being an independent team that wasn’t allowed to play in leagues, they finally were admitted in 2021 and now call the Edmonton Minor Soccer Association home. And what a start they’ve had, advancing six players into the Whitecaps MLS Next team along the way, and beating Calgary Foothills to win their first Alberta U17 Provincial championship and qualify for nationals.

In this year’s nationals a pair of 2-0 victories over PEI FC Charlottetown and Regina Bluestars seeing them top their group and clinch a spot in the semis. Forwards Frankroy Cain and Choosen Jones form a formidable front two that will prove to be a handful for Surrey’s defence. 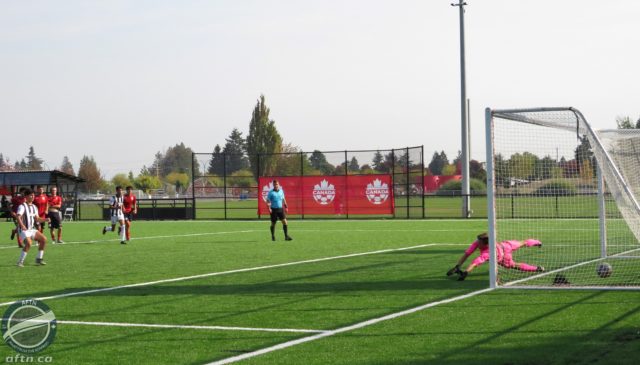 This group went down to the wire and penalty kicks to decide who was to advance to semi-finals. In the end it was Ontario Cup champions Glen Shields. The club are celebrating their 40th anniversary this year and a U17 Nationals title would be the cherry on top for them and would be their seventh youth championship at the various youth levels in their history.

After claiming their spot at the Nationals with a penalty kick win over Erin Mills Eagles, they saw off New Brunswick’s Moncton Codiac 3-0, with the highly touted Dante Lomangino grabbing a goal and an assist.

The tall striker has had several trials over in Italy before Covid hit and looks set to go back over after he graduates high school in January. He signed a CPL developmental contract with York United earlier this year and was on the bench at BC Place for their Canadian Championship match against the Whitecaps in the summer.

With Nova Scotia’s Halifax Dunbrack also winning their first match against Moncton, that set up a win and you’re in scenario for both teams in the group decider. A pulsating game saw Halifax come from behind, the second time in the final minute with 10 men, to force a 2-2 draw and spark a penalty shootout to see who advanced. Penalties again proved kind to Glen Shields and they went through 5-4. 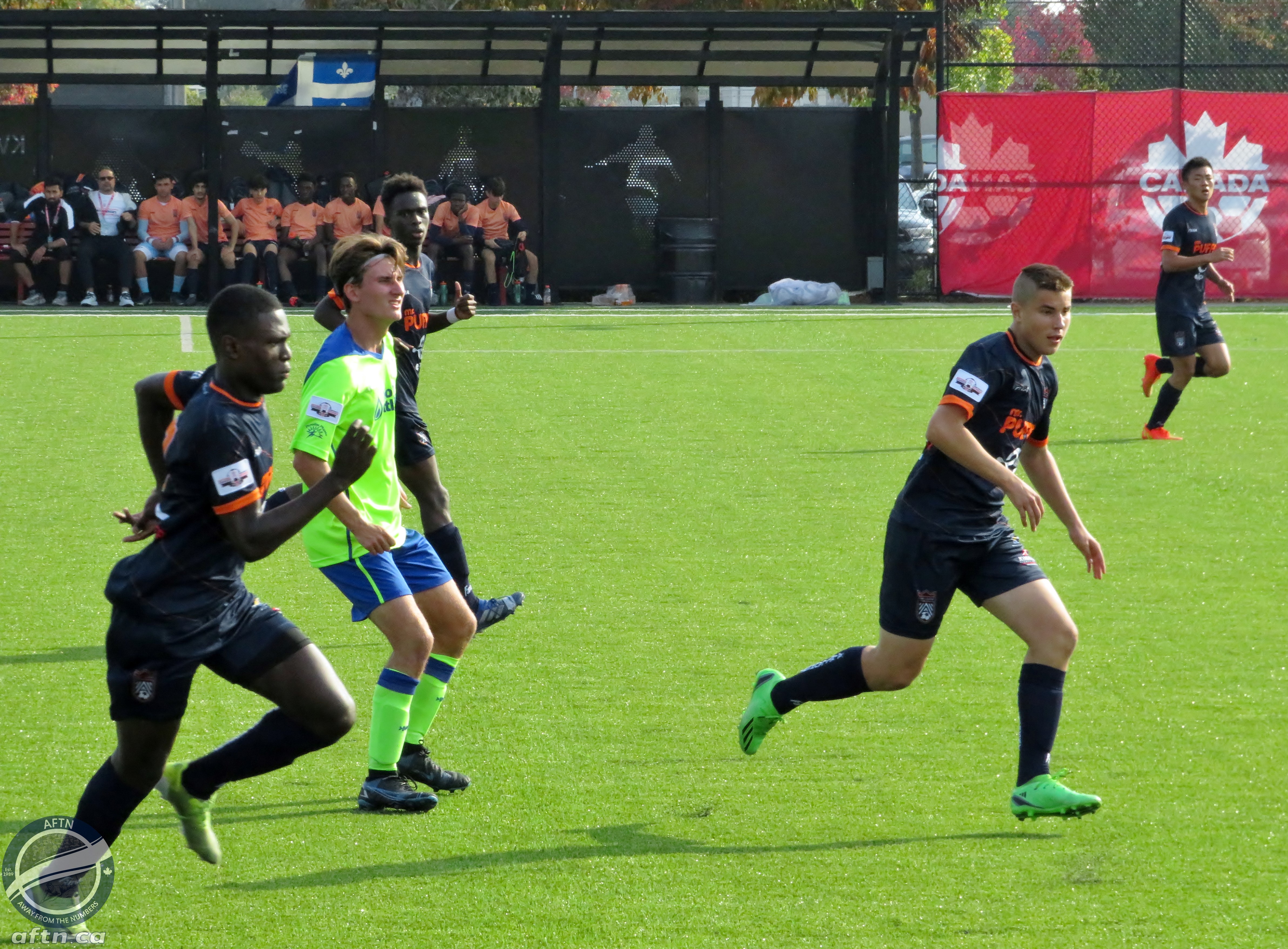 This was just a two team group with a pair of matches between Quebec Cup champs CS Saint-Laurent and Newfoundland and Labrador’s Paradise SC, with the Quebec side comfortably advancing on the back of two 3-0 victories.

CS Saint-Laurent are another side celebrating their 40th anniversary this year and they did so by launching a senior team in the PLSQ, where they finished second in their inaugural season.

This is their second straight U17 Nationals. Last time around, they had a certain Ismael Kone playing and scoring for them on their way to a bronze medal. 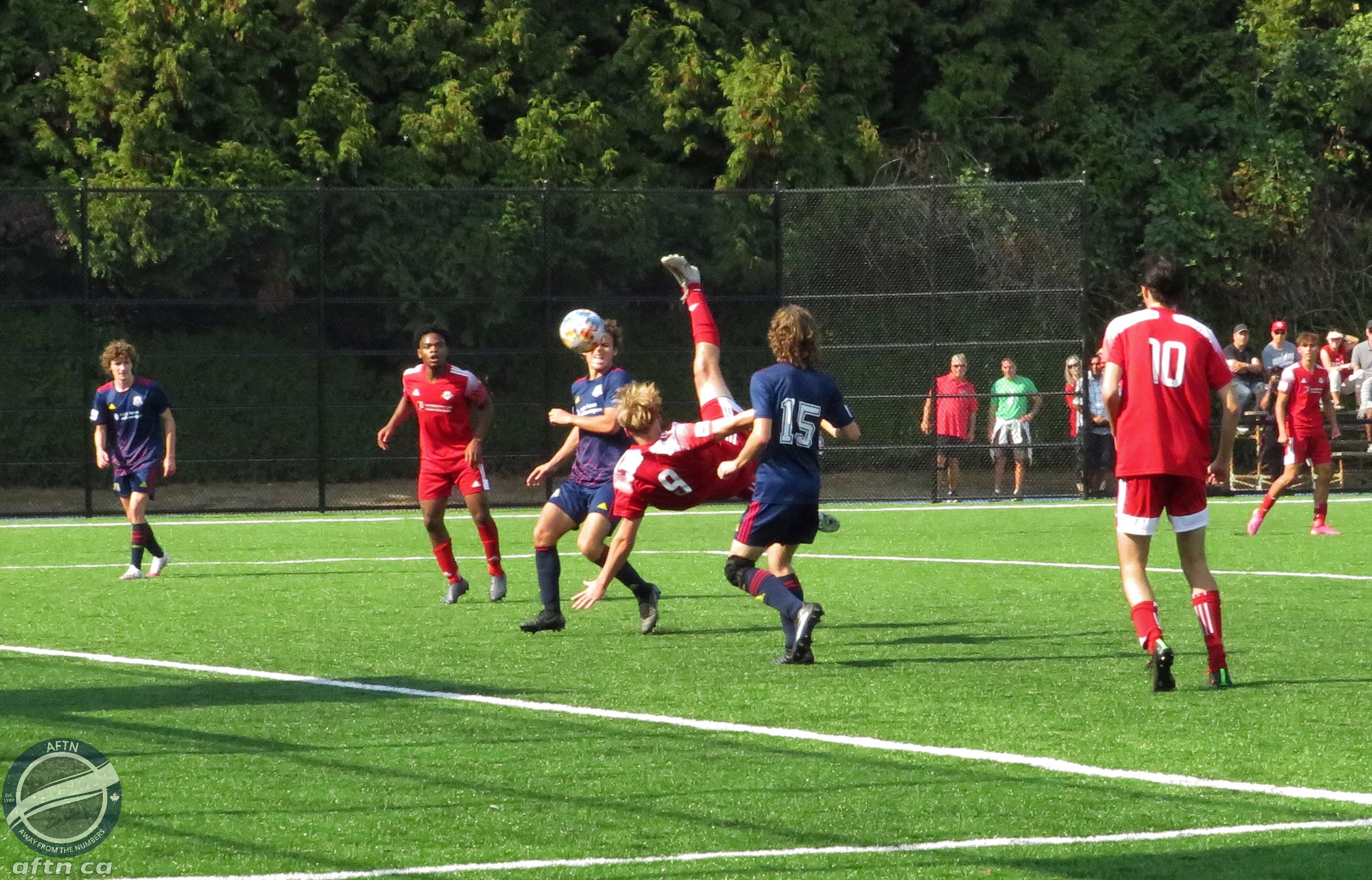 Hosts Surrey United found themselves in a three team group alongside fellow BC side Vancouver Island Wave, who they beat in the Provincial championship game in the summer. Not the best scenario for BC fans, but it gave the province a great chance of advancing a team to a medal game and it turned out to be the hosts, Surrey.

The two BC teams met in the first match of the group with Tristan Miyagi’s 68th minute strike cancelling out Isaac Tate’s 12th minute opener for the Wave from the spot.

It's been coming and @SurreyUnitedSC tie it up in the 68th minute against @VIWave at Newton in the U17 Boys Nationals. Great hustle to keep on it from Tristan Miyagi and he gets his reward. 1-1 with 12 minutes left to play. pic.twitter.com/jC47rDfhjA

The Wave took the lead again in their second game against Manitoba champs Bonivital, but they were pegged back once more and had to settle for another 1-1 draw.

That left Surrey knowing a win against the Winnipeg side in their last group game and they would play for a medal of some colour come Monday. They duly obliged with a 4-0 spanking with Jace Wiebe powerfully heading them on their way just four minutes in. Two goals in three second minutes from Roman Bandiera and Malcolm Kengni had them in dreamland, and Daniel Ganief sealed a great afternoon for the Surrey lad with a fourth three minutes from time.