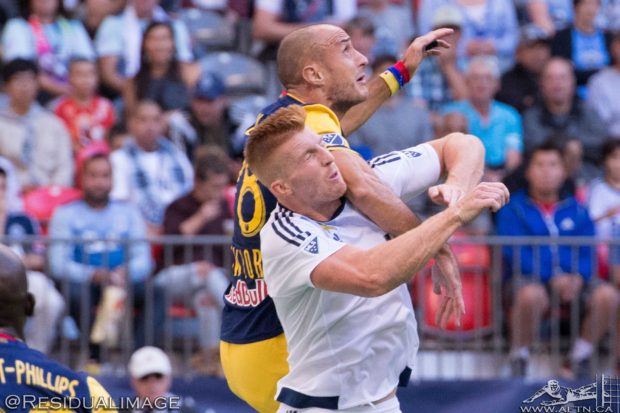 Vancouver Whitecaps continue their end of the year road trip. This time they are stopping by the New York Red Bulls for an inter-conference battle. The Whitecaps have already clinched a playoff berth while the Red Bulls are looking to secure the last remaining spot in the Eastern Conference.

For New York a win here and results elsewhere will be helpful in getting that spot. The Whitecaps however will look to cement their place in the Western Conference’s top spot, and they only need three points to secure a top two finish and a first round playoff bye.

With the season winding down the Red Bulls will need to fight to get out the recent slump they find themselves in (eight games without a win) otherwise they may not make the postseason. A win for the Whitecaps and we will be in a good position to make a deep postseason run. The biggest problem for the ‘Caps in this one may be all the absences from international duty.

Who Will We See?:

It is unfortunate that the Whitecaps are going to have some international absences, Kendall Waston and Christian Bolanos will be away with Costa Rica, Yordy Reyna is with Peru, and Stefan Marinovic is on the other side of the world in Japan with New Zealand. Those outfield players in particular have been some key names for the Whitecaps over this season and it will be hard to replace them.

Seeing as how the next game isn’t for eight days, it will be good to have the best starting eleven that we can out against a desperate Red Bull team. The Whitecaps have a clear plan on the road – be pacy and sit deep. So far it continues to work this season, but will the execution of the plan be as good as it was against Sporting KC?

Starting from the back, David Ousted will clearly get the nod, although it would have been interesting if Marinovic had been around, as he showed some excellent saves and positioning against SKC. That said, I still remain unconvinced that he is ready for the number one spot.

Jordan Harvey and Jake Nerwinski will guard the outside. Nerwinski has had a fantastic rookie season and although a long shot, he should get some recognition as a MLS Rookie of the Year candidate.

The center backs will be interesting with Waston gone, we will likely get to see Aaron Maund step in beside Tim Parker. Hopefully they will be able to give the proper direction to stifle NYRB’s anaemic attack and quickly establish an understanding together. Maund’s only other Whitecaps appearance was alongside Waston.

In front of these two should be Tony Tchani and Aly Ghazal, both have fight and love to win the ball back in midfield. With a Red Bulls team that likes to press opponents high it, will be key for them to win those battles in the midfield so they can make a pass to unleash the pace we have on the home side.

Up front leading the line should be Fredy Montero. He has quietly had a good season here in Vancouver. His ability to finish and set up attacks will be key in unlocking the backline of New York.

Behind Montero will be interesting, but I would like to see Mezquida get the start. He is always an energetic presence and is a good presser of the ball. If he can make some sloppy turnovers happen, our pace can hurt the Red Bulls.

On the wings I continue to be bullish about Alphonso Davies getting some starting time, even if only for 60 minutes. I would love to see what he can do. However Robbo has many options out wide in Brek Shea, Bernie Ibini, and Cristian Techera.

I would be confident with any combination of them going into this game. They have all contributed to setting up and finishing goals, although if I was going in with one I would take Techera, mostly because with Bolanos and Reyna out we are lacking in some creativity and free kick delivery. Techera brings both.

Hopefully the Whitecaps can continue to have good road form. They will need to be able to win on the road if they think they have a pathway to the MLS Cup.

Who will be rotated into the Whitecaps team with players away?

Will the Whitecaps be able to defend deep and break on the counter once again?

Can the ‘Caps get the three points they need to clinch a first round playoff bye?

Sacha Kljestan – He needs to start clicking with those around him to get the NYRB into the playoffs. The Whitecaps need to make sure it doesn’t start against them.

Nick: 1-1. A gutsy road draw against a struggling team.

Joe: 1-0. Smash and grab with plenty of diving and faking injuries please!