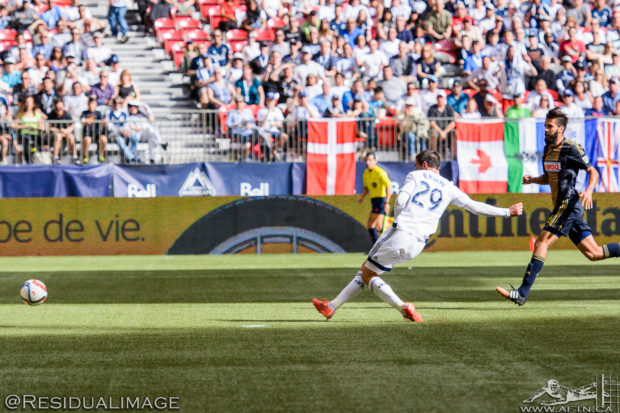 The ‘Caps have an away game in Philly before they fly home for the much anticipated return leg of the Canadian Championship final. The TFC game left a bitter taste in the mouth. We played well and face an uphill battle to turn this tie around after an unlucky deflected goal. The real question is whether the team can focus on this game with Wednesday night’s match in front of the BC Place faithful looming.

Games against Philadelphia Union have brought entertainment in the past. There was that frantic 3-3 draw in Robbo’s first season when we threw away a two goal lead to rescue a point via a Pedro Morales penalty. Last year it was “the save” featuring David Ousted. Hopefully this means we can expect some drama. But the good kind.

The Union have been sitting pretty at the top of the Eastern Conference for a while, but are only five points ahead of the ‘Caps. The key to their success is their home form. The Union are undefeated at home in 2016, winning six of the eight games they have played so far. Recent matches at the TALEN Energy Stadium have generally been high scoring affairs, but the Union seem to always finish on top. There is an average of six goals per game in their last three MLS matches.

Chris Pontius and C.J. Sapong have been doing the business for the Union with five goals each in 2016. Pontius also has four assists to his name. The former DC United man has thrived since his trade and is a major factor behind the Union emerging as the surprise package of this season.

It seems like it could be a nightmarish night for the ‘Caps leaky defence. The Whitecaps have conceded 27 goals through 16 games. I would argue that had the defensive players shown a bit of discipline we might not have had this problem: Fraser Aird, Jordan Smith and Kendall Waston have all seen red at least once this season, while Pa Modou Kah is susceptible to the occasional self-destruction.

They haven’t been getting much help from the midfield either. Christian Bolanos frequently switches off on his tracking back, and Cristian Techera has looked a different player to the one we fell in love with last season.

The formation will likely be the familiar compact 4-2-3-1 that we see in away games. The question is who should be rested for the game against Toronto on Wednesday?

Despite the quick turnaround, I expect Robbo to play a full strength team in Philadelphia. Pedro Morales, Matias Laba, Fraser Aird, Kekuta Manneh, Tim Parker and David Ousted will probably be in the line up. Andrew Jacobson is also likely to continue in the central defensive pairing with Parker, as Kendall Waston serves the second game of his suspension.

At this point I could see either one of Octavio Rivero or Erik Hurtado starting, as both struggle to find the net consistently. Might this be the game that we see Blas Perez start up front?

Russell Teibert played well in Toronto, but I would understand if Morales starts in the deeper role with Nicolas Mezquida in the attacking midfielder spot.

We have to respect the attacking capabilities of the Union. This means defending as a team: something we haven’t been doing this year. A team of flair and technical prowess needs to have the intelligence and guile to not concede silly goals.

This game could be a defensive platform to build on for the rest of the regular season. It’s getting to the time of year when we check the standings after every game to determine playoff hopes. If we keep defending the way we have been, it will be a nervous few months as we try and stay above that thin red line.

Chris Pontius – Goals, assists, he can do it all