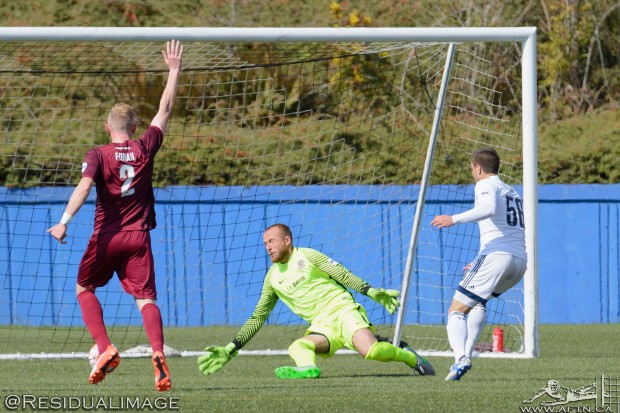 One great thing about Vancouver Whitecaps having teams in both MLS and USL these days – two home openers to enjoy!

There were no goals in WFC2’s 0-0 draw with Sacramento Republic on Sunday, but that doesn’t mean that there wasn’t a lot of action, with the majority of it coming in the first half.

Both teams had a goal disallowed for offside and a penalty claim waved away before the break, and although the visitors controlled the game for much of the second half, they couldn’t find a way through and the young ‘Caps made it unbeaten in three to start the new USL season, with two clean sheets, and only one goals against, thrown in for good measure.

It was another young team put out by Alan Koch, with three teenagers starting and an average age of just 21. It’s been a baptism of fire for his young squad to start the new campaign, with games against three tough sides – last year’s Western Conference champs, OC Blues, Cascadian rivals Timbers 2, and now 2014 USL Champions, and one of the favourites for this year’s title, Sacramento.

They’ve got two wins and a draw to show for it. They may have only taken a point from their home opener, but Koch was delighted with the display, and in particular another strong defensive showing.

“I just went to our back four, and Sean Melvin, and congratulated them on getting a clean sheet,” Koch told us after the game. “It’s part of our development, as a group, going on the road the first two games and getting six points is fantastic.

“The games at home are obviously where we’d like to try and play and get the three points but to get one point against a team as good as Sacramento, we’re happy.”

Sacramento coach Paul Buckle was ultimately pleased at getting a point on the road, but disappointed that his side couldn’t turn their possession into a winner.

“I just felt, really and truthfully, we deserved to win the game on the play in the second half,” Buckle told AFTN after the match. “We dominated without really having that finish or that final ball.

Buckle was less happy, however, with two first half decisions that he felt cost his team all three points.

“I have to say, we had a stonewall penalty in the first half,” Buckle told us. “It’s happening too often. You don’t want to talk about officials but I just spoke to them. It was a stonewall penalty and it’s a game changer. That’s the point in the game. We felt it was stonewall. It’s not even up for discussion it’s that blatant. And again I’d like to see Tommy’s [Stewart] goal as I didn’t feel he was offside.”

From watching the replays, Stewart’s goal definitely looks to be offside, whereas Daniel Haber’s disallowed one for Vancouver seemed to be onside. Both teams should likely have had first half penalties, with Ben McKendry clearly being bowled over in the box.

But them’s the breaks, as Koch summed up.

“I’d like to have seen us create more in the second half. We kind of faded away as the game went on, which is somewhat ironic as we spoke to the guys at half time and said we’re the younger, we’re the fitter, we should have more energy, let’s take it to them in the second half. Having said that, the experience, which they had, is obviously priceless and they managed the situation in the second half very, very well.” 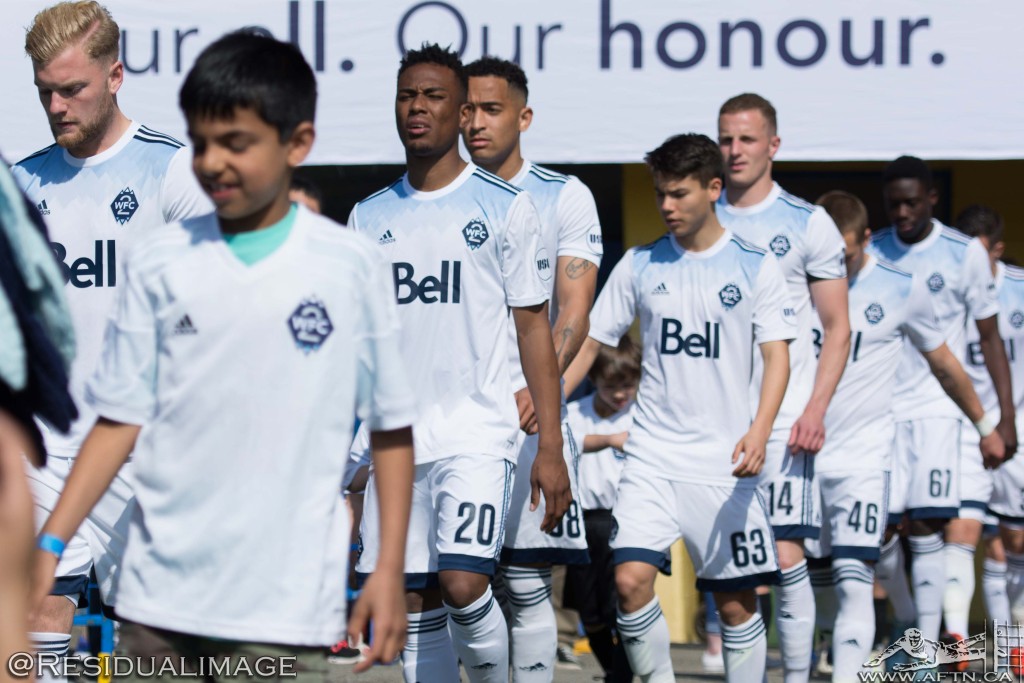 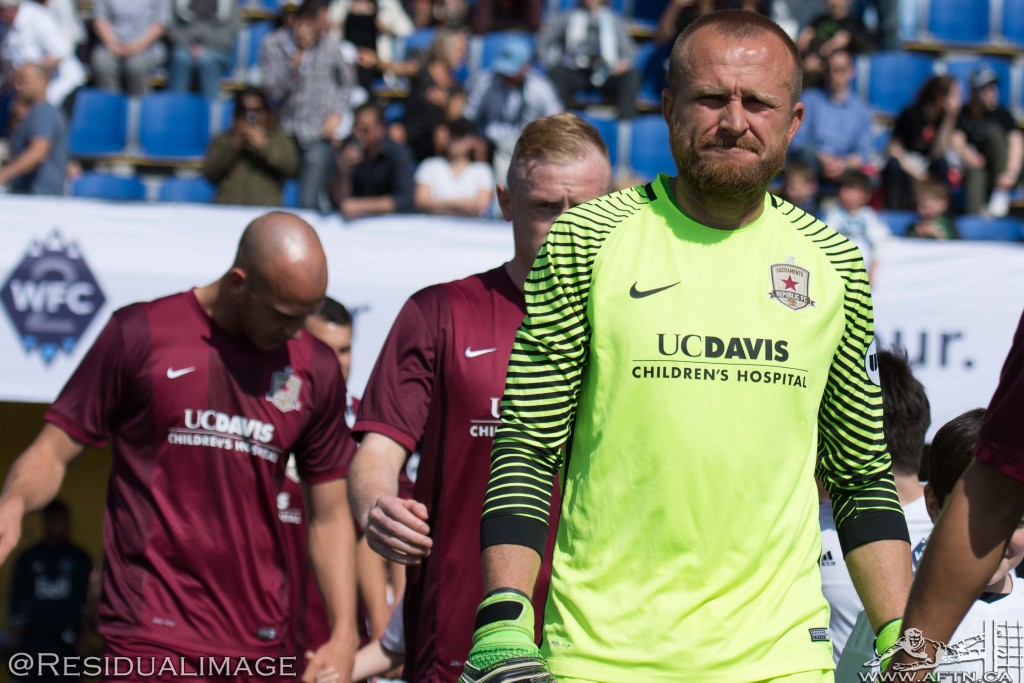 Sacramento on the other hand weren’t looking so fresh faced 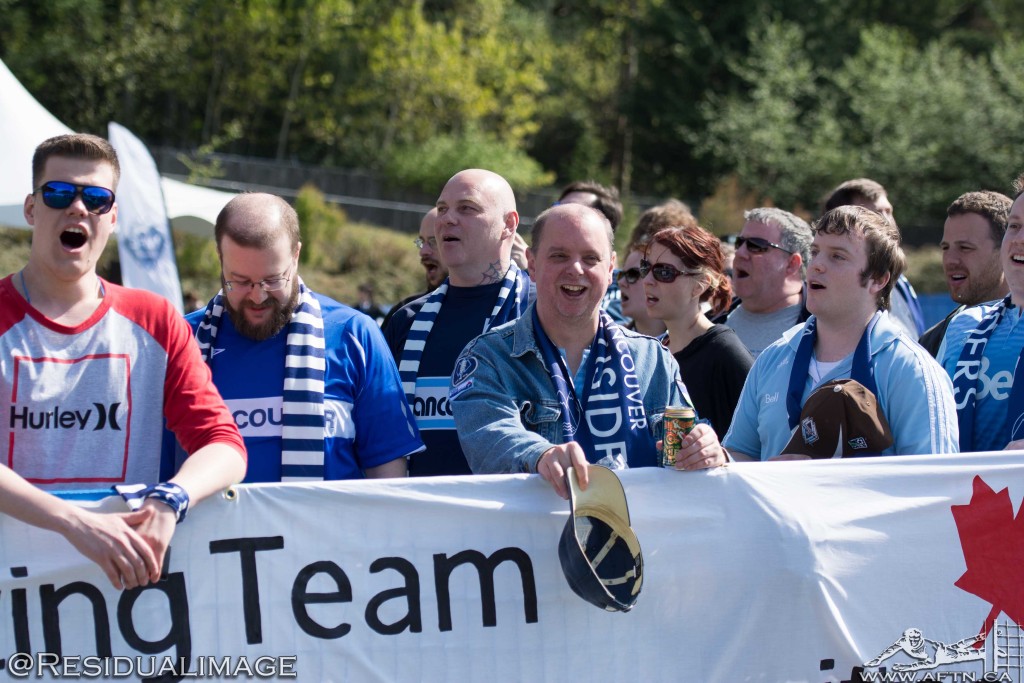 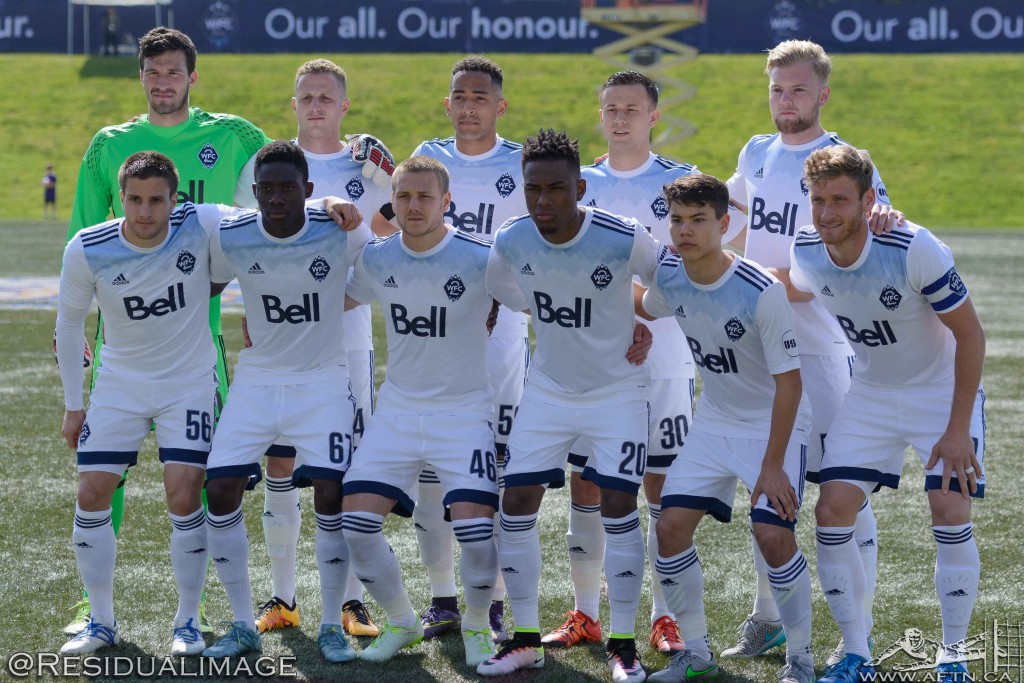 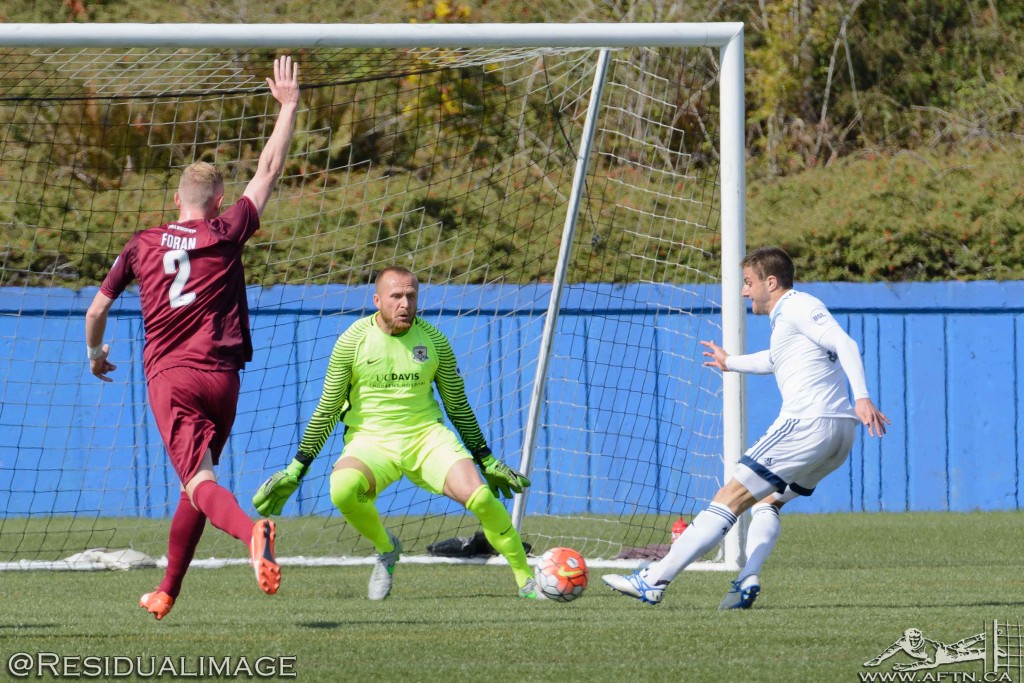 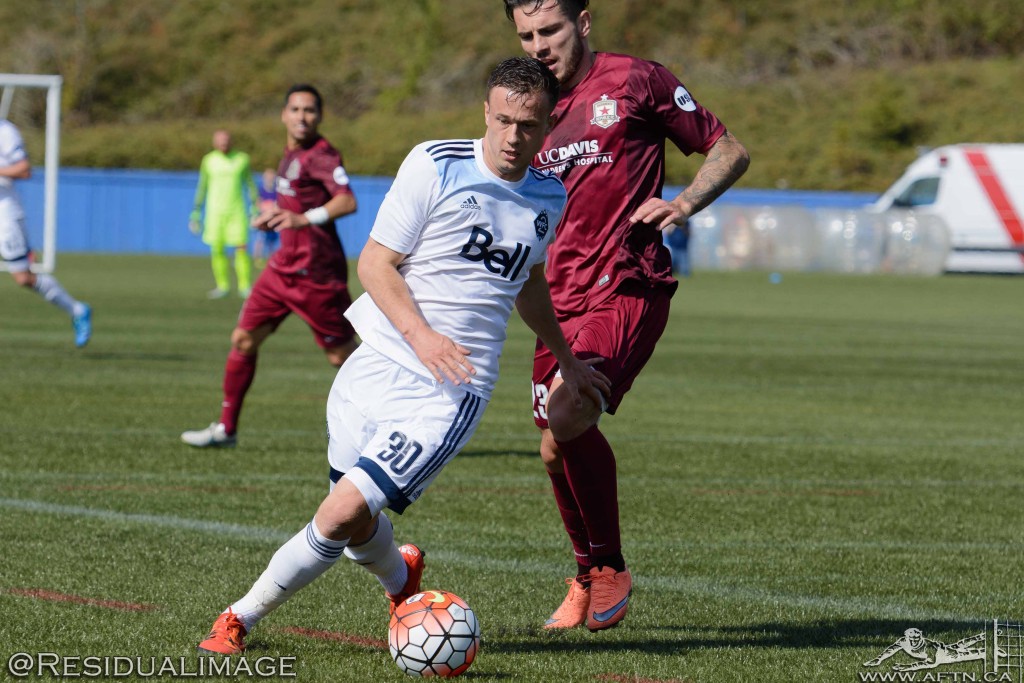 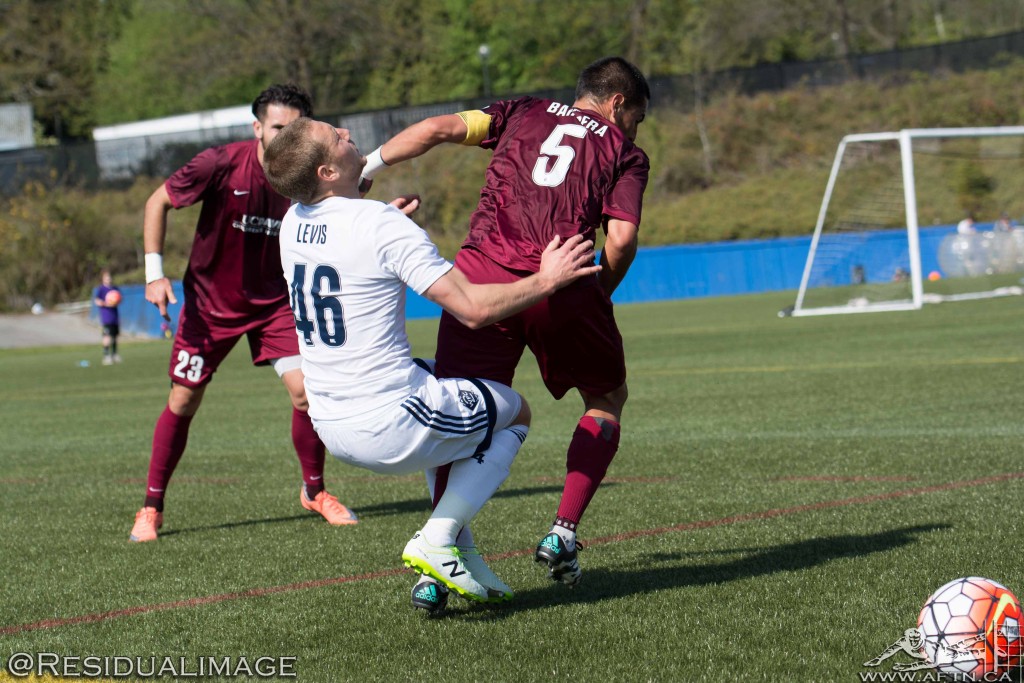 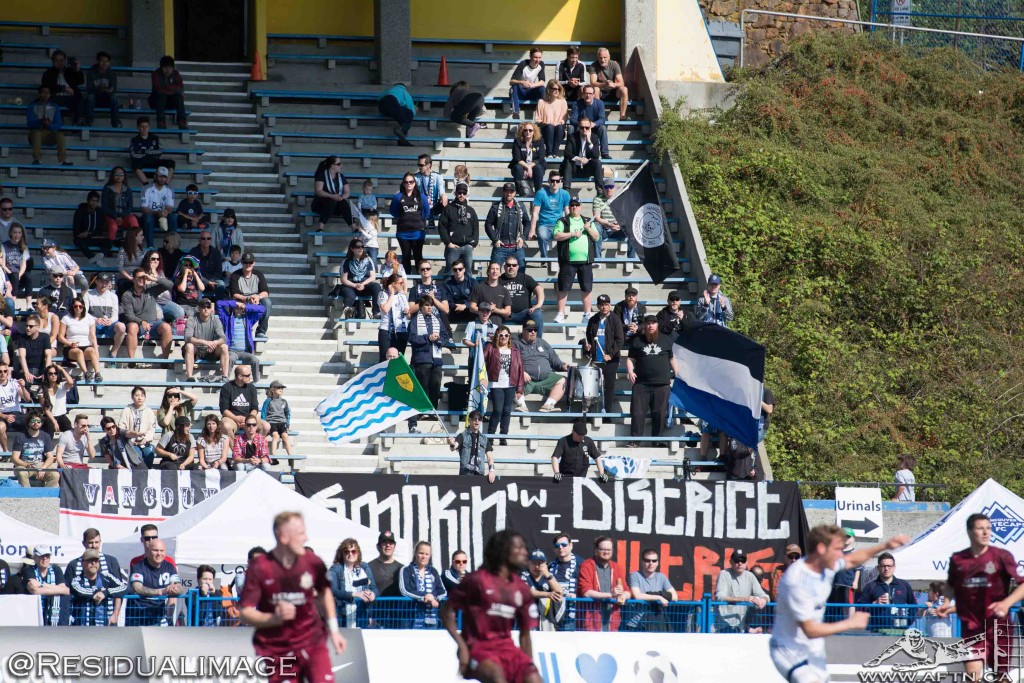 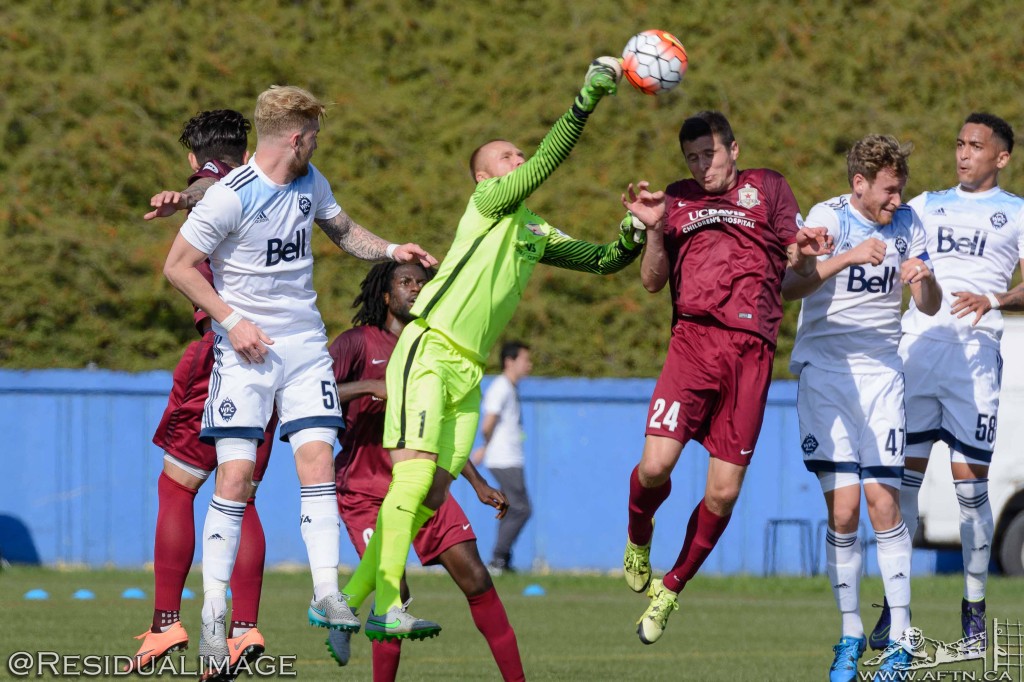 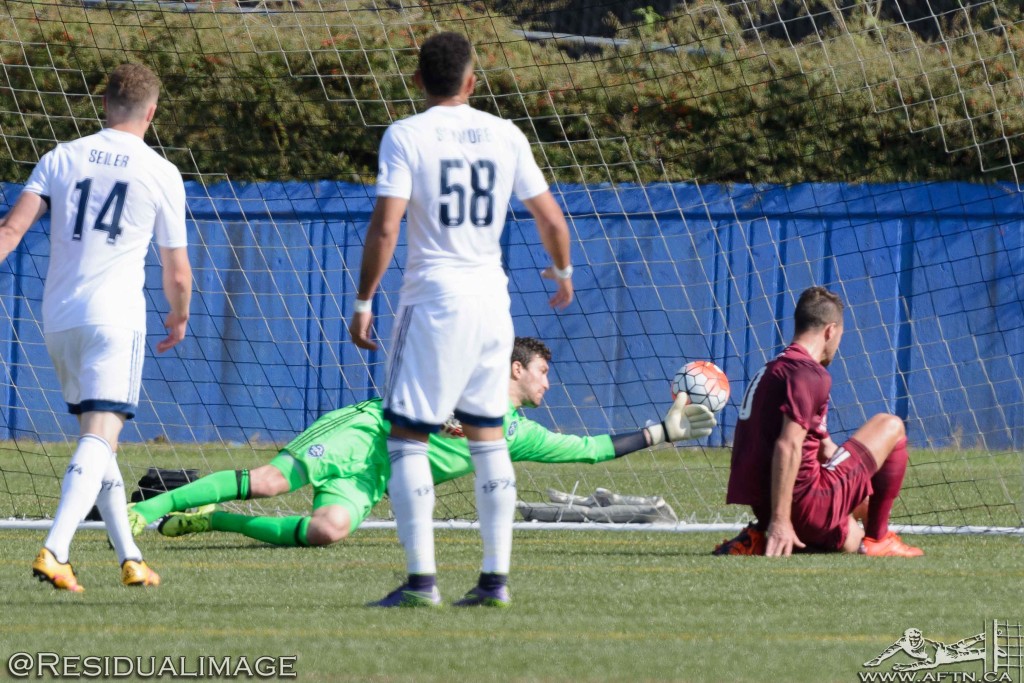 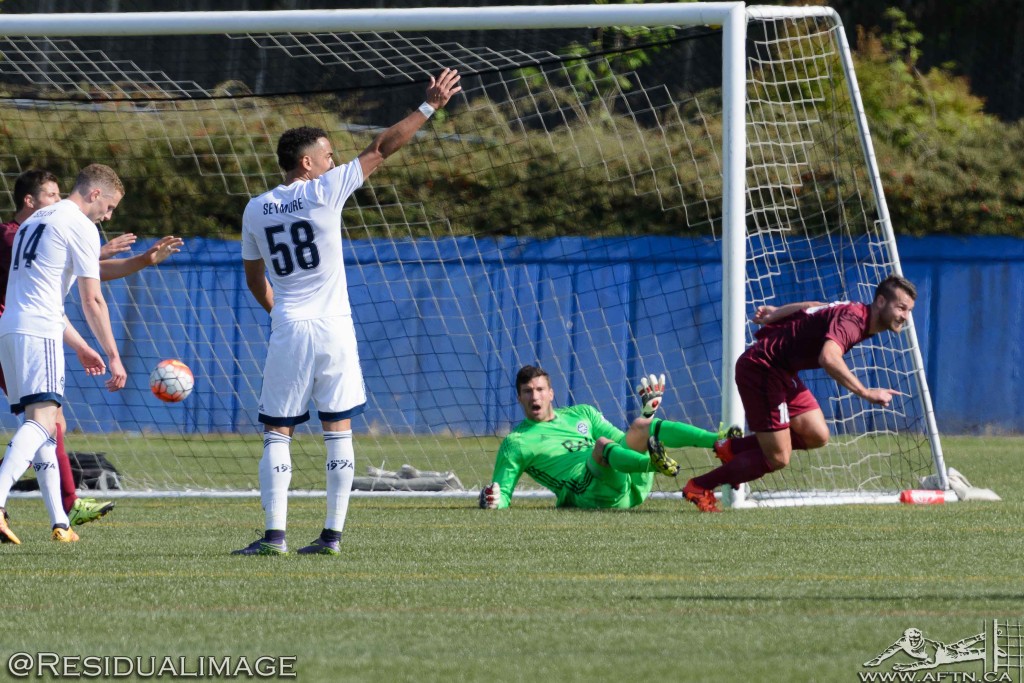 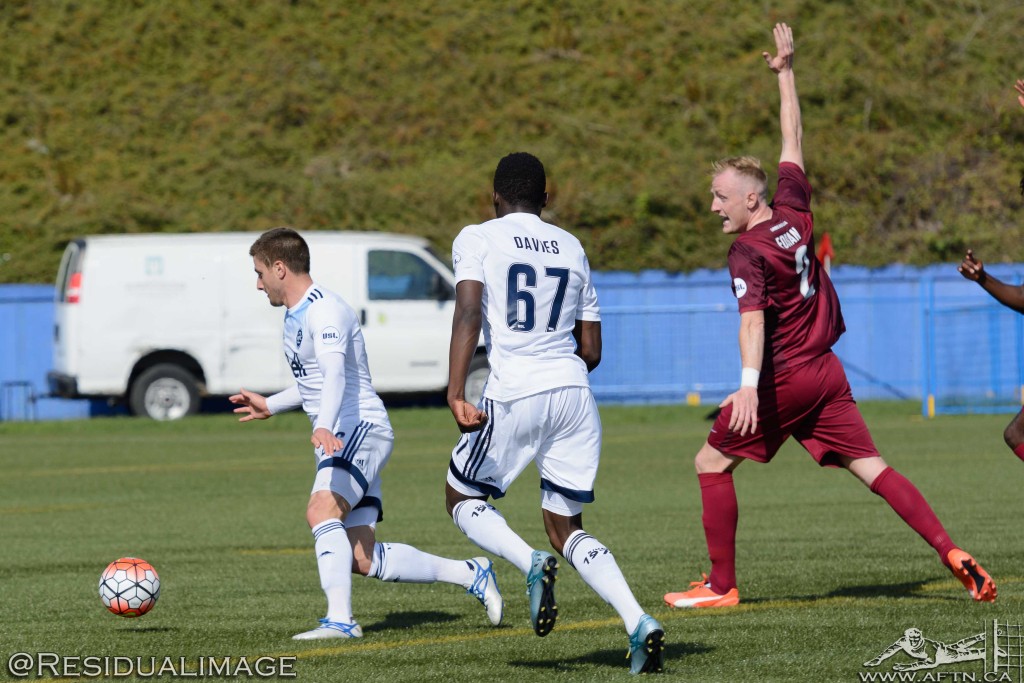 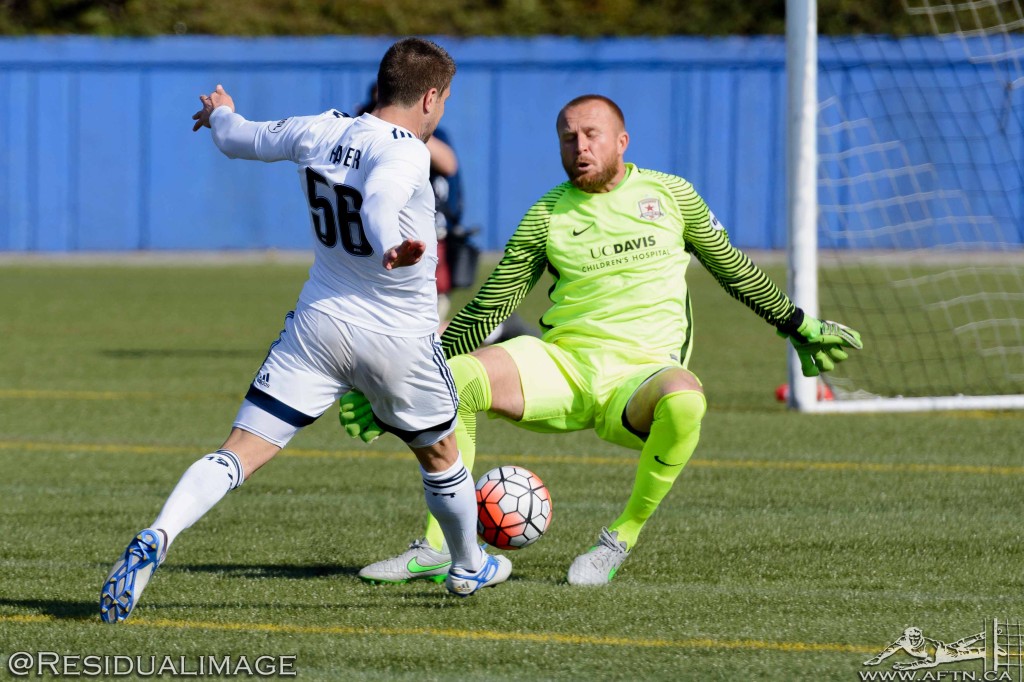 Haber comes close again in the 54th minute but Dominik Jakubek stands tall to record his first save of the season, three matches in 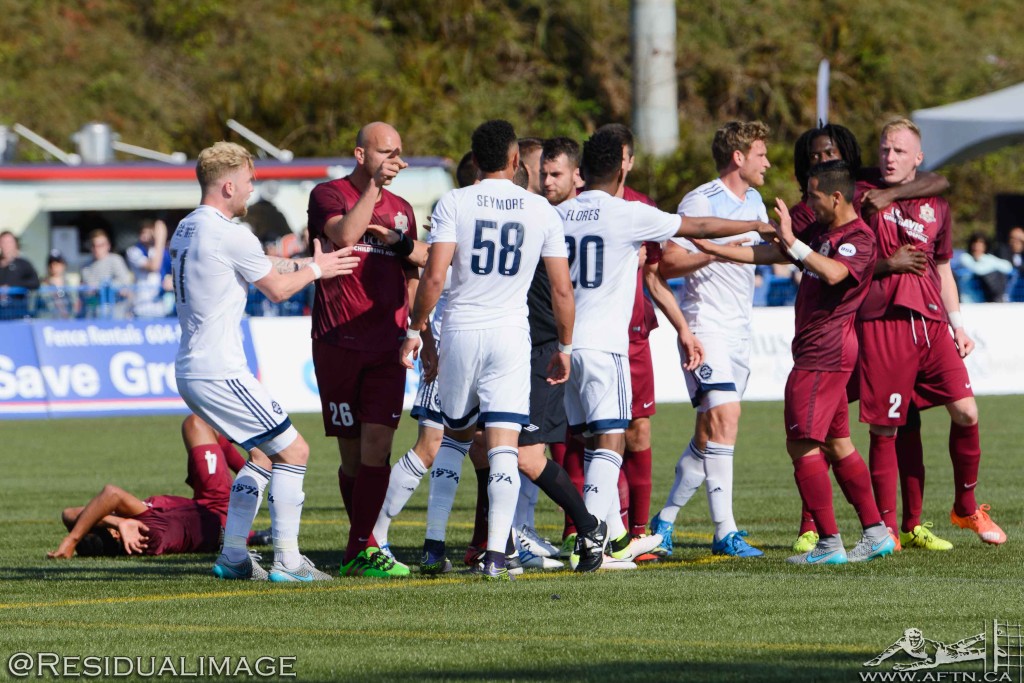 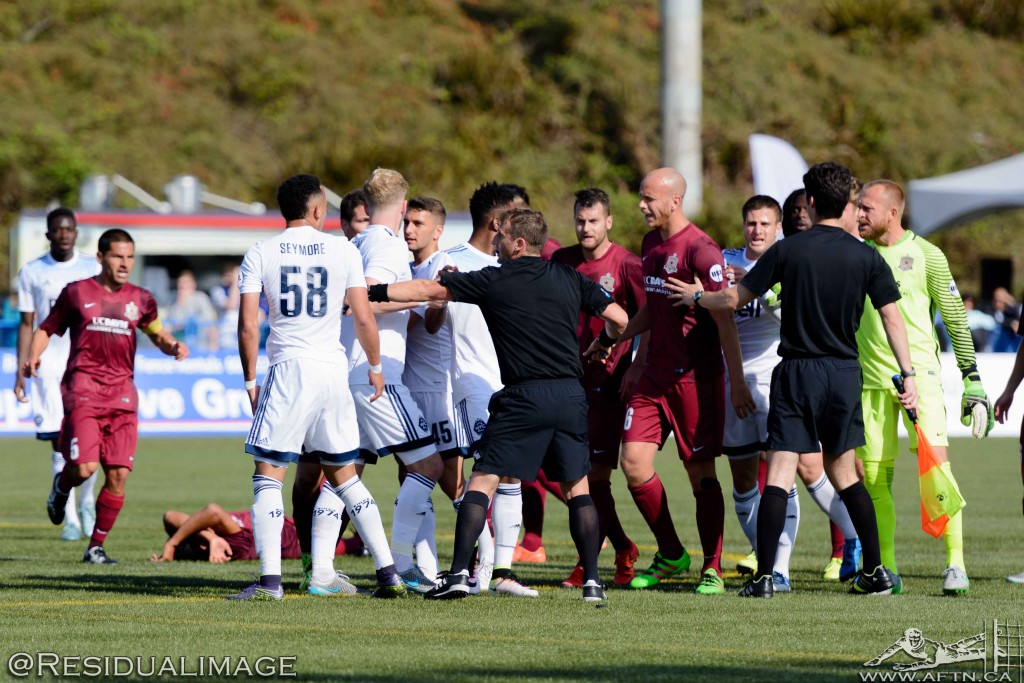 Just a booking for Seymore as everybody gets involved, no doubt telling the ref that that would be a red in MLS 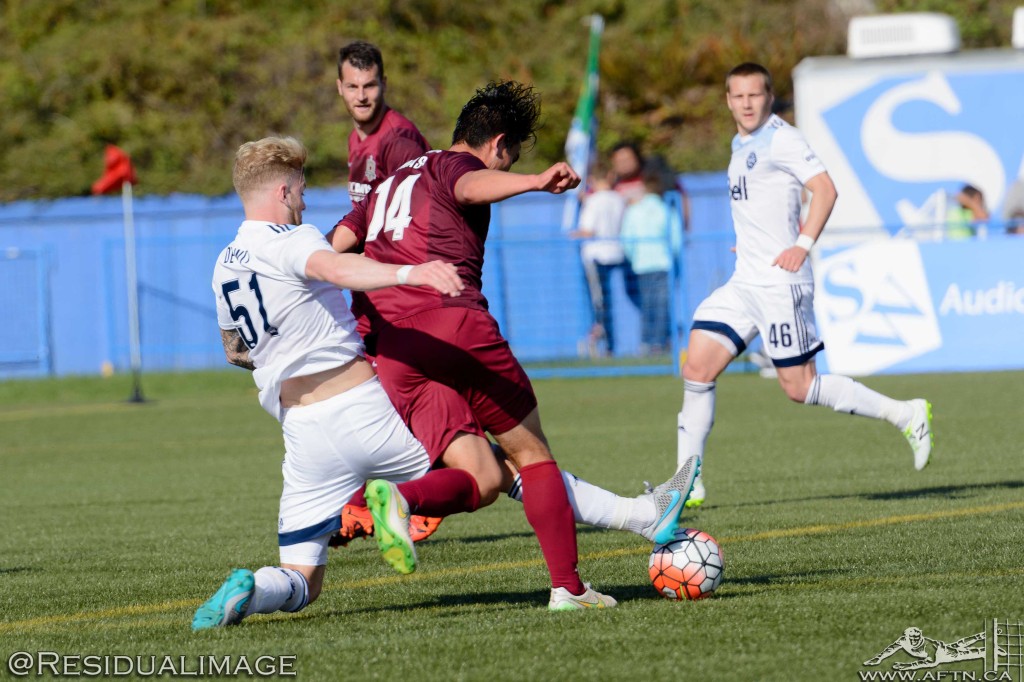 Sem de Wit had another strong showing at the back for WFC2, winning everything in the air and on the deck 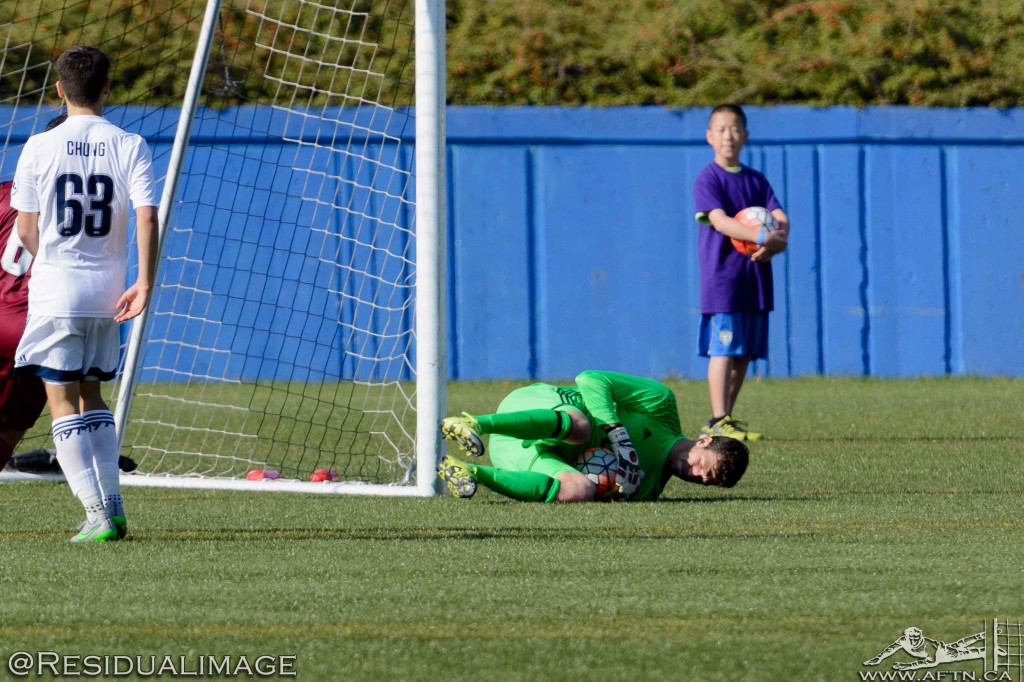 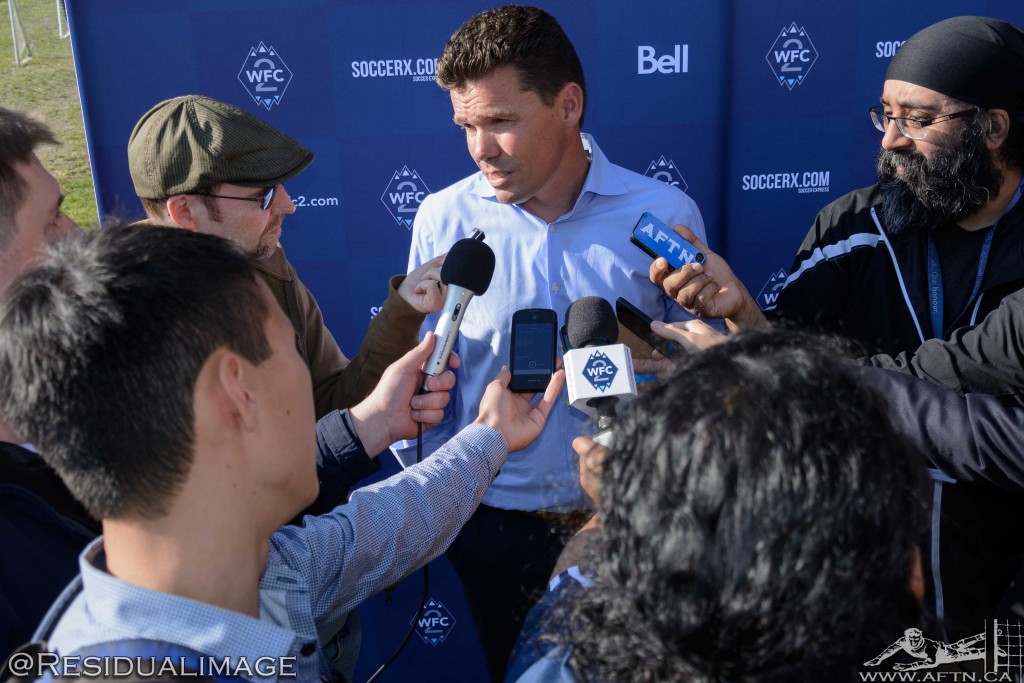