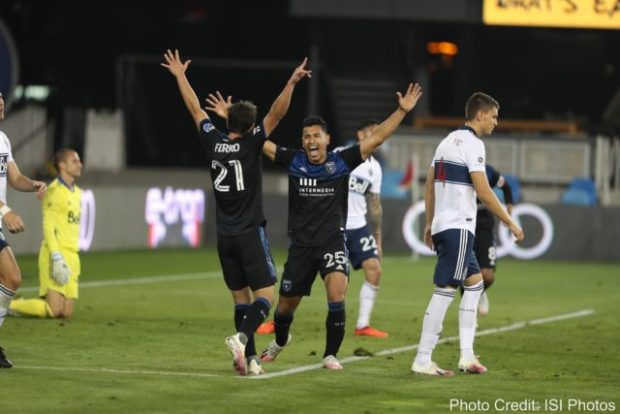 The Whitecaps’ quest to get over 1 PPG marches on. After yet another draw the ‘Caps are now tied with Austin FC in the bottom of the Western Conference standings, seven points adrift from the final playoff spot. Seven points might not seem insurmountable at first glance, but keep in mind that’s nearly 50% of the total amount of points they have so far this season.

If the ‘Caps are to even pretend like they’re fighting for a playoff spot, this coming stretch will decide it. Their next five MLS matches are against teams in the 7th to 12th range in the West, three of them at BC Place(!) and two of them against fellow cellar-dwellers Austin.

These are all winnable games. Of course, the ‘Caps only have three wins this season, and you’d think that they’d have to probably get at least that many out of these next five to have any actual shot at a playoff place.

The first stop on this stretch is in San Jose in a Friday night clash. The biggest question surely on the mind of all ‘Caps supporters is the following: how much is Ryan Gauld going to play?

He made his first appearance off the bench last weekend, and showed just enough to tantalize the fanbase. It’s obviously only a matter of time before he’s starting every match, but how soon can he do it? The sooner the better, but I wouldn’t be surprised if his first start is delayed for another week or two.

If Gauld doesn’t start against the Quakes, it’ll be a bit of a bitter pill to swallow given how the team was crying out for quality attack against the Galaxy. The good news is that both Cristian Dájome and Cristian Gutiérrez were able to take part in some training this week, and might be able to return to the line-up on Friday.

If they aren’t, however, things look a bit grim, especially with the news that Lucas Cavallini will miss six weeks with the knee injury he picked up last time out. If Gauld remains only a sub and the ‘Caps are down their DP striker on top of arguably their two best performers this season in the two Cristians, there will be some question marks all over the field.

One interesting thing to note from the starting XI against the Galaxy was that Janio Bikel stayed in his new number 8 role even with Michael Baldisimo suspended. It was Patrick Metcalfe who saw the start rather than Russell Teibert (who in fact put in a good shift in the substitute role).

Metcalfe did not stand out too much, so if Marc Dos Santos wants to stick with Bikel and Caio Alexandre as the midfielders further forward, then Baldisimo should slide back into the starting line-up. Once Gauld is ready to start that will provide an interesting shift, as one of Bikel or Alexandre will surely have to drop deeper to accommodate him, unless the ‘Caps again shift formation into some sort of a 4-4-2 diamond.

That drastic of a system shift would seem an odd choice when the ‘Caps have had a small amount of success in this 4-3-3, though if the last couple years have shown anything it’s that there is no consistent identity with this team in how they set up.

Looking at the hosts, San Jose is on a similar run to the ‘Caps as they are on a seven-match unbeaten streak, though five of those seven are draws. They’ve also only won two of their last fourteen matches overall dating back to the middle of May, and now sit 10th in the Western Conference.

Cristian Espinoza has been a rock for the Quakes in midfield this year, leading all their outfield players in minutes by a decent amount and contributing two goals (tied for third) and six assists (leads team). Their defence has been porous, conceding 27 goals (only one ahead of the ‘Caps for fourth-worst in the West) and 57-year-old Chris Wondolowski is still playing regular minutes.

The all-time season series between these two sides is pretty even, with the ‘Caps holding the edge with a 10-8-9 record. Recent trips to Northern California have not gone well for the ‘Caps, however, with their last two trips to Avaya Stadium, now PayPal Park, ending in 3-1 and 3-0 losses. The ‘Caps were also outshot 60-12 in those two matches combined, which is…not good. Maxime Crépeau probably still wakes up in a cold sweat thinking about it.

The Whitecaps are in a bit of an odd position where you feel like there shouldn’t be real reason to be optimistic at all given their position in the standings, yet there is still that flicker that has been boosted by the arrival of their shiny new number 10. Whether that will mean anything tangible in 2021 remains to be seen.