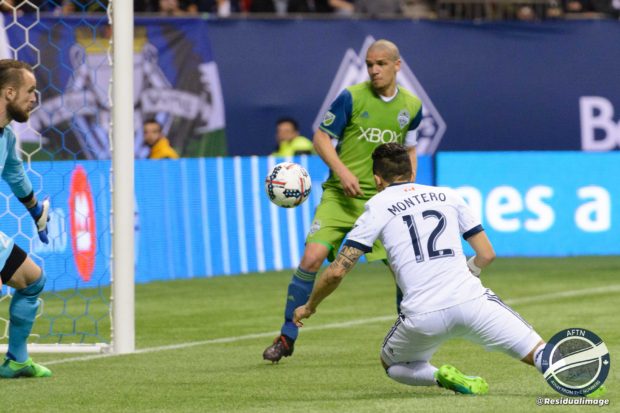 Welcome back to the Cascadia Cup. Although the Whitecaps have had difficulties in this tournament this season, perhaps now will be the time to rocket to the top of the Cascadia Cup standings and cement their place on top of the Western Conference (and clinch a playoff spot).

It’s a big game and the Whitecaps will need to put their best players on the pitch and have the best execution of their game plan to make it happen. But then, they have another big match against Sporting Kansas City on Saturday who are hot on their heels trying to catch the Whitecaps. So we may see some squad rotation. With four of the last five regular season games away from home, expect to see nearly the full squad used as some stage.

Seattle are in a bit of a freefall, having gone winless in the last five games. They have a good team (many players on that squad have a MLS Cup winners medal), but they are getting older. Perhaps time is catching up. The Whitecaps though, will go to Seattle with the third best road record. Why? Because they can murder teams who give up the ball (as evidenced with Colorado) and hit them quickly with speed.

We know what the Whitecaps game plan will be for the next games, but it will be interesting to see who will be trotted out to partake in them. This has been a jam packed schedule that is not going to make picking up points against another top team in the West easy. Although with Seattle struggling to win, this looks like the perfect set-up for a classic smash and grab.

So who will be rotated in for these games on the road?

David Ousted continues to do wonders, even with the good defensive wall in front of him. Every once and awhile he can win a game or a point for you. If we want to win the Cascadia Cup he is going to be called upon.

The backline will be led by Kendall Waston (fresh from his rest after being suspended last game). Tim Parker should slot in beside him. Together they have formed a solid partnership, dominating our box, and winning most aerial duels. In the fullback position I expect to see Jake Nerwinski and Jordan Harvey, some youth mixed with some experience. Like Waston, Harvey will also be fresh for this one after sitting out the win over Colorado at the weekend.

The midfield will likely be a place where we will see some rotation happening through the next key games. Tony Tchani and Aly Ghazal have formed a formidable partnership. Each being able to win the ball back and drive the team forward. Andrew Jacobson could get a shout in this spot, as could Russell Teibert (who knows how feisty this game could get and has done well in previous encounters marking Clint Dempsey out of the game), but it’s more likely that one or both of them will be given a shot at SKC.

Perhaps this will be the time and the place for Alphonso Davies to get another start. I feel like the pace and hustle he brings to both sides of the ball would be very advantageous to this game, especially with the Sounders looking weak in the right back position. We know Seattle will be pushing hard for the win, but young Davies is not one to back down from a challenge. It would be great to see him go close to the full 90 minutes in this game.

On the other wing I would like to continue to have Cristian Techera there. His crafty feet and trickery would help unlock other parts of the play, but his lack of stature could be his undoing in this likely physical affair. Or we could go with the strength and speed of Bernie Ibini or Brek Shea. Ibini is the fresher and showed some nice stuff when he came on as a sub on Saturday.

How the Whitecaps want the counter attack to develop depends on which players Robbo is going with. I don’t mind Techera to balance out the pace of whoever is on the other wing, but both wingers will need to defend, especially if the full backs push up and tear up the wings again.

Yordy Reyna and Fredy Montero continue to be the dynamic duo, through which the Whitecaps offense drives. Reyna is fantastic with his pace and ability with the ball at his feet, whether taking on defenders or arriving late in the box. And apparently he can drop crosses on dimes as well.

Montero has amazing vision and is able to anticipate the play developing. He pops up wherever he needs to be to get touches on the ball. Not only that, when playing with his feet he is more than capable of setting up a goal (as evidenced recently). Saturday’s goal equalled his best ever goalscoring season in MLS. Putting at least one away at the place he used to call home, would be the perfect story to give him his best one.

Reyna and Montero have a great chemistry together. They complement and reinforce each other’s traits. If the opposition focuses on Montero, Reyna is free. If they try to lock up Reyna, that leaves Montero free. This duo forces the other team to pick their poison, except both of them are deadly.

Seattle always shows up for these games, and will want to use this rivalry to get the team going in a positive direction. They have dangerous players who are in a slump now, and if they can get back to the quality they have they can give the ‘Caps are hard game. A win for Vancouver though, set them up nicely for the final month of the season and would see them move to seven points ahead of Seattle, with a game in hand. There’s a lot at stake, let’s see which team will rise to the occasion.

How well will the Whitecaps transition game work?

What rotation will there be?

Can we keep our Cascadia Cup hopes alive?

Nicolás Lodeiro – He is a maestro and can do it all. If he is clicking then Seattle will be more dangerous

Nick: 3-2 for Vancouver. It’s going to be another crazy Cascadia game