Well, it was better than 6-0, right? Just four days after their California thrashing the Whitecaps played Portland at home in Portland, losing 1-0 in a particularly limp performance to finish their gruelling run of five matches in two weeks. Hopefully they’ve had enough rest, as they now embark up the highway to Seattle, to take on the other co-leader of the Western Conference.

The ‘Caps have been quite bipolar in their performances recently, as they followed up four straight shutout losses with a run of three wins in four, before now getting shut out twice in a row. There will also not be a ton more rest coming up, as this Cascadia clash is the first of five matches in sixteen days, though two of them are at “home” and they will not go further afield than Los Angeles.

For the first time in a long while there is legitimate intrigue over who will start in goal, as Bryan Meredith could see his spot supplanted after just two matches. With both Maxime Crépeau and Thomas Hasal potentially out for the rest of the season, and only the teenager Isaac Boehmer standing beside Meredith as an option, the ‘Caps decided to spring for a fifth goalie and traded for Evan Bush from Montreal.

Bush, now 34, was the Impact’s number one goalkeeper for five years, but he had his spot in the line-up taken by Clément Diop. His contract (he signed a sizeable three-year extension before the 2019 season) makes him an odd target for the ‘Caps to grab, but they obviously feel they need a new body in goal if they are to make a somewhat unlikely playoff push.

In the defence, the ‘Caps trotted out a new centre-back pairing against the Timbers, as Ranko Veselinović and Derek Cornelius were replaced by Érik Godoy and Andy Rose. Godoy will surely return to his spot as an everyday starter soon, which leaves the question of who pairs best with him. Given what they’ve invested (or at least seem like they will invest) in Ranko Veselinović you’d have to assume he gets a real shot at it, but Marc Dos Santos is clearly a fan of Andy Rose in that position.

Perhaps more interestingly, Cristián Gutiérrez retained his spot in the line-up, starting at left-back for the fourth straight match. Ali Adnan made the start on the wing (though he did drop back when David Milinković came on for Gutiérrez in the second half), and you could argue either way over which of the two should start at left-back in Seattle. Depending on whether Gutiérrez is healthy to go, if Adnan is on the wing or put back on the bench that could be telling with regards to his future in Vancouver.

In the midfield, we saw the pairing of Janio Bikel and Leonard Owusu for the first time, and while it wasn’t awful it also wasn’t particularly inspiring. Michael Baldisimo has remained one of the few shining lights for the club this season and surely can’t be left on the bench for too long, and the thought of adding him to Bikel and Owusu as a trio sounds promising.

Of course, that would mean going back to the 4-3-3, meaning that either Lucas Cavallini or Fredy Montero would need to return to the bench. Cavallini has really struggled to find his footing this season, but benching him would not be great optics-wise. Montero has been quiet his last two appearances, but still has two goals and an assist to show for his three starts. 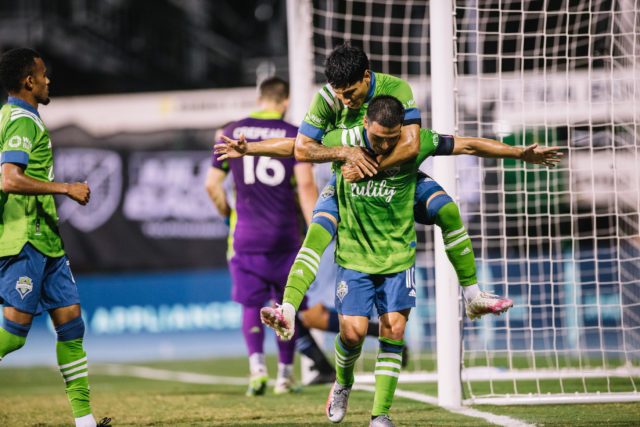 Looking at the hosts, Seattle is on a tear, winning four straight matches by a combined score of 14-2 (including a 7-1 beatdown of San Jose). Last time out was a 3-1 victory over the LA Galaxy that saw the Sounders jump out to the lead in the 12th minute and never look back, only conceding a consolation goal in the final few minutes.

Seattle leads MLS in goals with 29, and they also have the league’s best goal difference at +17. Raúl Ruidiaz leads the way in that category with eight, while Jordan Morris has been electric with seven goals and six assists. That includes one of each category against the ‘Caps when Seattle beat them 3-0 in Orlando back on July 19th.

The ‘Caps are a dismal 0-6-2 against the Sounders over the last three years, and have been outscored 14-1 in those meetings. If they are to turn the tide against their rivals it will likely need to come on the offensive end, as the Sounders have only been shutout once in their last eleven matches. The ‘Caps have been shutout five times in that span. Now, I’m not an analytics expert, but that doesn’t seem good. Let’s hope that tally doesn’t creep up again on Saturday.