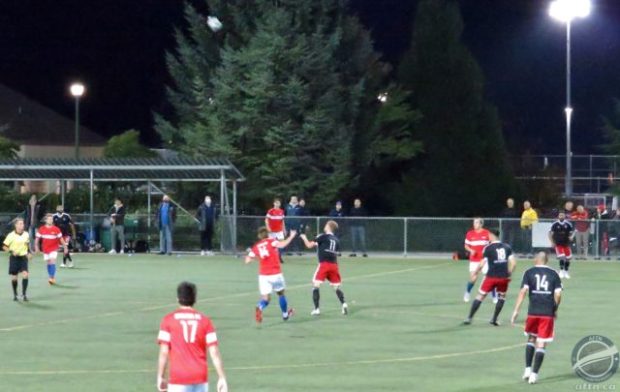 The Vancouver Metro Soccer League is back!

The VMSL returned to action for the first time since March this past weekend with a new temporary return to play set-up. There’s new rules, new competitions, but still the same intensity you’d expect from a new season kicking off.

With BC Soccer Covid restrictions still in force, league play is not on the table as of right now. Clubs are instead playing in divisional ‘Cohort Cups’, with teams initially playing in bubble-esque groups of four before the best placed teams will advance to the knockout stages later this year.

Originally planned to be called the Covid Cup, the league adopted a recommendation from a member to instead name each of the nine tournaments after an important members of the BC soccer community.

But it’s now just new cups that the teams are competing in to kick off the season, they have some rule changes to manoeuvre as well to satisfy restrictions during the current pandemic, with a new set of return to play guidelines in place.

The key changes see kick-ins instead if throw-ins, with no outfield player permitted to touch the ball with his hands at any time, including positioning the ball or retrieving it.

Also players are prohibited from spitting and nose clearing. If the referee sees a player doing this then he will be asked to leave the field of play at the first stoppage of play for a minimum of 15 minutes.

Each division will also now be able to make unlimited substitutions during a game. 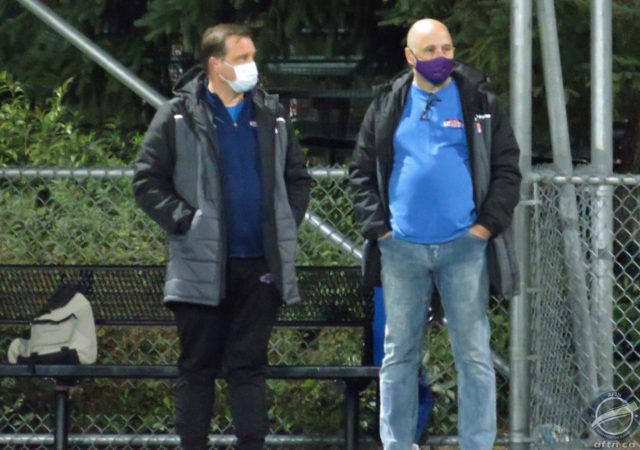 The William Azzi Premier Division Cohort Cup sees 11 of the 12 Premier teams drawn into three groups of four, with teams playing each other home and away. Coquitlam Metro Ford Wolves decided not to take part in the competition, so last season’s fourth placed Division 1 team Westside SC have taken their place in the top flight for this tournament, slotting into Group A alongside BB5 United, Club Inter EDC Burnaby, and last season’s Premier Division champions Rino’s VSC.

The Group A action got underway at Newton Athletic Park in Surrey on Friday evening when BB5 United beat Rino’s 5-1 thanks to a brace from Otto Kabbadj, goals from Caleb Clarke and Yassin Essa, and a Rino’s own goal.

BB5 is new moniker for CCB LFC United, who chose to rename their team to honour player Brandon Bassi, who was tragically killed in a car accident in May last year. The VMSL also name their U21 Cohort Cup in Brandon’s honour.

Westside join BB5 at the top of the Group A standings following a 2-1 win over Inter at Point Grey on Saturday afternoon. A Justin Lee strike and an Inter own goal gave Westside the three points.

2018/19 Premier Division champs Croatia SC were in Group B action at Burnaby Lake on Friday evening, but they were made to work hard for a 2-1 victory over SFC Pegasus. 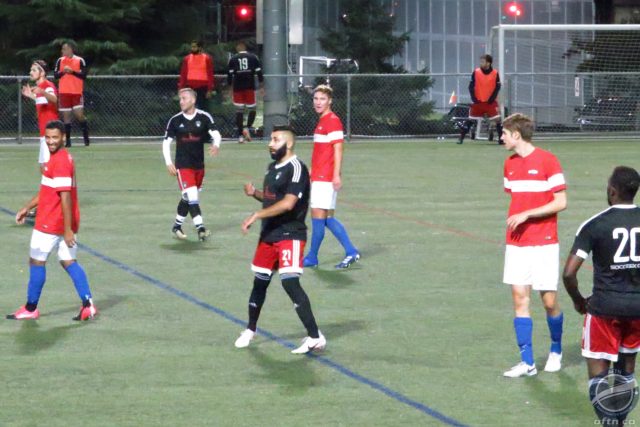 Croatia looked strong in the early going and took the lead 17 minutes in when David Malamura tucked on away from the spot. But Pegasus fought back and earned a penalty off their own in the dying minutes of the half. The Horsemen saw their initial kick saved but they tucked away the rebound to level things up at the half.

Pegasus were the far better team in the second half, controlling play and creating numerous chances which they were unable to convert into the go-ahead goal. Croatia seemed happy to soak up the pressure and hit on the counter, with both teams looking capable of adding to the scoreline.

In the end it was Croatia who did that against the run of play in the 83rd minute, finishing off a nice move to take a 2-1 lead.

Pegasus nearly responded immediately but saw the ball cleared off the line after the Croatia keeper had let an effort slip through his gloves, and Croatia had a chance to add to their lead in the closing moments, earning another penalty, which Malamura saw expertly saved by the Pegasus keeper.

Pegasus will rue their missed chances but it was a solid performance from the Surrey side and gives them something to build upon for the rest of the season.

The other Group B match of the weekend saw MAFC Tigers Vancouver run out 3-0 winners over NVFC Norvan at Burnaby Lake on Saturday evening thanks to goals from Erik Edwardson, Joe Zupo, and Mohammad Karimi.

MAFC Tigers are an amalgamation of promoted side Burnaby Metro Athletic and FC Tigers, the latter of which had a previous tie in with last year’s champions Rino’s VSC, and are managed by former Whitecaps U16 coach Adam Day.

The Group C action kicked off at Thunderbird Stadium on Friday evening as last year’s Division 1 champs VUFC Hibernian came away with a 3-1 win over Burnaby Selects White Eagles.

Group C rounded off at Newton on Friday night with West Van coming away with a 3-1 win over BCT Rovers Hurricanes. The Hurricanes roster is also currently under review, which obviously won’t impact this result but may lead to further action being taken by the league.

There’s another set of matches coming up this weekend, so get out an enjoy some live football action if you can! You can find all of this week’s fixtures HERE.