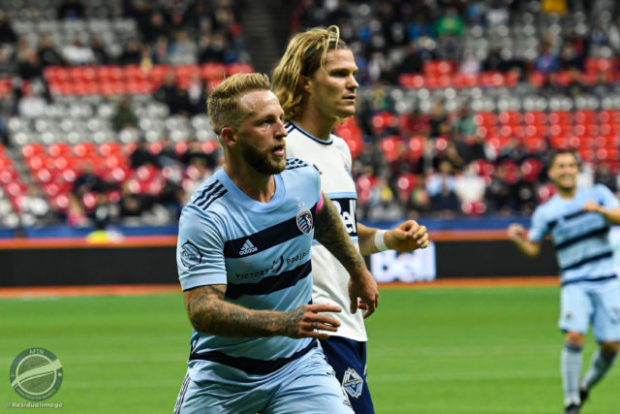 Yes, there’s yet another Whitecaps game coming up on Saturday! It’s the final stop on the stretch that has seen the ‘Caps play seven matches in just 21 days, with this match against SKC their third road match in the last week.

Perhaps surprisingly, this very busy stretch has coincided with the ‘Caps’ best run of form this season as they are 4-1-1 in all competitions in their last six, 2-1-1 in MLS play, and they’ve advanced to the semi-finals of the Canadian Championship after narrowly defeating Cavalry FC on penalty kicks Wednesday night.

The match against Cavalry also served as a bit of a shot in the arm in terms of players returning from absences, with Lucas Cavallini back from his suspension and Cody Cropper and Jake Nerwinski out of health and safety protocols. Pedro Vite has also now cleared protocols for this weekend meaning that Brian White is the only player still in them for Saturday.

The other player who will miss out on Saturday is Russell Teibert who will fail to appear in a match for the first time this year due to the eye injury he picked up on Wednesday. Hopefully it’s not serious, but in the meantime it will likely be Sebastian Berhalter alongside either Leo Owusu or Michael Baldisimo in the middle of the park.

The decision of who will line up in the back three is an interesting one. Érik Godoy just played on Wednesday and so you’d expect he’ll be held out on Saturday for load management. Ranko Veselinović has played a full 90 minutes three times in the last week and a half, while Javain Brown has started four straight matches although he’s been taken off as a substitute in three of them.

Nerwinski is the most obvious choice to slide back into the lineup, but from there it’ll come down to how much Vanni Sartini is going to ride both Veselinović and Brown, with Florian Jungwirth as the obvious replacement for either of them. The Cristián Gutiérrez as part of the back three experiment seems to have ended as he’s been used as a wingback instead in recent matches.

Up front, Cavallini has really turned his play around this season and is playing better than last year, and the more minutes that he can get with Ryan Gauld the better. Cristian Dájome is the most obvious replacement in the starting lineup if either Gauld or Déiber Caicedo need to be on the bench to start Saturday, given that Ryan Raposo has now made a new home as a wingback in Sartini’s system.

Looking at the hosts, SKC are also coming off a midweek cup win as they defeated Houston in the US Open Cup Round of 16. They got off to a very poor start to the season, losing six of their first eight matches, including 1-0 at BC Place back at the beginning of April, and since then have gone on a run of mostly draws with a 1-1-4 record in MLS play in the last month.

Children’s Mercy Park has not shown any mercy to the ‘Caps in recent years as they are 0-3-1 in their last four trips to Kansas City and have been outscored 13-2 over that stretch. The good news is that this is SKC at the weakest they’ve been in a while, sitting only two points ahead of the ‘Caps with two more matches played this season.

Of course, the Whitecaps are still bottom of the West themselves and below 1 PPG, with the late loss to Charlotte last weekend taking a bit of wind out of their sails. Hopefully, with a bit more of a complete roster and a dramatic win on Wednesday there’s still some gas left in the tank for this one.