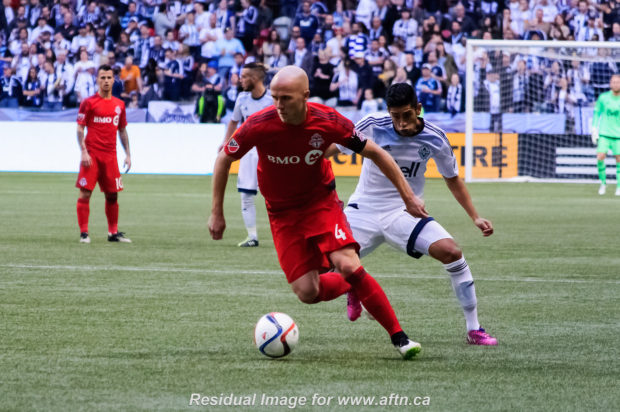 It’s a Canadian derby in a shiny new BMO field this weekend in Toronto. Vancouver Whitecaps, fresh off a midweek victory against Chicago Fire and a transfer deadline saga, will look to make it three wins in a row for the first time in 2016.

The Chicago game was marred by Masato Kudo’s injury. News has come out that the striker will undergo surgery for a fractured jaw, and we wish him a speedy and complete recovery. Kudo has done no wrong in a Whitecaps jersey, and despite having to wait a spell for his first goal, he seems to be a consummate professional that has bought into the values of this team.

Introducing the extremely experienced Blas Perez was never going to be a bad idea. Like all of our strikers, he works hard and hasn’t had the best luck in front of goal. That all changed on Wednesday. And that second goal wasn’t shabby either! People are comparing it to Camilo and Eric Hassli’s goals of yore, and while it was a lovely goal, I personally think Hassli vs Toronto tops the bunch.

Toronto are coming off a 1-0 win against FC Dallas at BMO field. A first half Tsubasa Endoh goal sealed the deal in front of a full house. TFC have 14 points so far this season, which may be a little deceptive as they have played all other games away from home. A 3-3-2 away record is very respectable in this league.

Toronto play a 4-4-2 narrow diamond. The diamond in the midfield is made up of Michael Bradley protecting the back four and playmaking, Will Johnson and Jonathan Osorio in the central positions in ball winning/box to box roles and Tsubasa Endoh at the tip of the diamond. Up front Toronto have the classic big man, small man system. The small man, however, is the league’s MVP Sebastian Giovinco. Jozy Altidore has scored against us before, so he can’t slip under the radar.

The Giovinco situation needs to be carefully planned. He could roast any of our defenders, but I believe there is a solution: The narrow diamond will allow our full backs to tuck in (likely with Sam Adekugbe in for a rested Jordan Harvey), meaning we can use a system that was employed against Clint Dempsey earlier in the season. When the ball is in the midfield, we surround Giovinco with four players, meaning that the ball will more likely be passed elsewhere. It worked a treat against Dempsey, he had to go all the way to the midfield to pick up the ball, and then have to go through our entire team to make anything happen.

Laba starting in the midfield would be ideal, but Jacobson could also fulfill this role. His partnering midfielder should also be a ball winner, so I think this is a Russell Teibert game. Pedro Morales has done well in the deep lying playmaker role, but we can’t afford to be over run in the middle of the park. Morales should get the number 10 spot for this game, if he indeed starts at all. The wingers should be some combination of Kekuta Manneh, Cristian Techera, Nicolas Mezquida and Christian Bolanos (depending on who needs a break).

It will be nice to see Steven Beitashour again; he has settled well for TFC, and was a great player for us. Because he knows our team, he will know to expect the long switching passes that Morales is capable of. I don’t particularly fear the TFC back line, but they have been solid this season.
With Kudo and Octavio Rivero both out injured, Blas Perez will get to start up top, but Erik Hurtado is going to be important in the coming weeks and should get a run out off the bench.

With this being the third game in eight days, how strong will the Whitecaps be and how many will be rested ahead of Portland next week?

Will the trap work on Sebastian Giovinco?

Can the Whitecaps centre backs shut out Jozy Altidore?

Sebastian Giovinco – he really is quite good