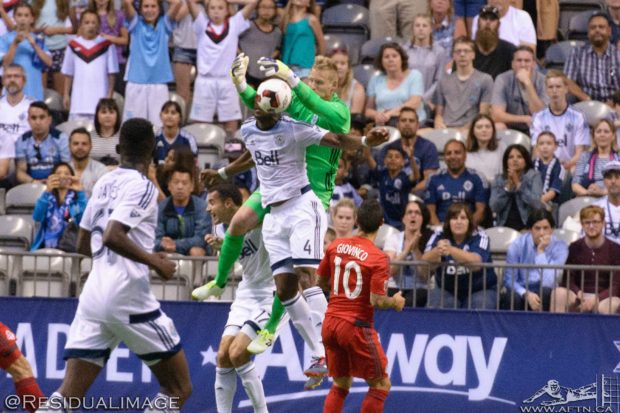 Wednesday night I was driving from downtown to Horseshoe Bay to get the water taxi back to Bowen Island with my friend Drew. Drew’s a double digit Southsider, holding membership number 34, I think. He’s been standing behind the goal since 2008 or so, and watching and playing football for years before that. We drove in bewildered silence most of the way. Once in a while we’d say something meaningful about what we’d just witnessed and then Drew would chant the mantra:

“Yeah, but that’s why we love football.”

And we’d fall into silence again.

Wednesday night was utterly astonishing. It is so rare in football that a single goal changes a result from a win to a loss. It is only through the anomaly of the away goals rule that such a scenario is possible at all. That rarity of the moment, combined with the magnitude of the occasion, made for the most bizarre atmosphere I have ever witnessed.

From the moment Tim Parker netted our second goal, the energy and sound began to climb in the Southside. We were singing something fierce, willing our players forward when they had the ball, pushing them back to defend when they didn’t. I am pretty sure that it has never been that loud inside BC Place for a Whitecaps match. It built and built and built through the end of 90 minutes, through the four minutes of added time, through the 13 extra seconds.

And then suddenly, instant, utter, silence. It was as if our voices were robbed of air. Open mouthed, wide eyed, frozen in disbelief. From the Pigeon Loft I could actually hear the 20 or so TFC supporters cheering all the way across the stadium in their little away section. We were that close to a second Cup win, and it was if the entire stadium jumped into an alternate universe. When has such an event ever happened in football? When were 20,000 intensely cheering people instantly silenced by a goal that stole the Cup from their hands? What did we just witness?

I don’t know about you but I had an eerie sense of time passing slower with each second. At 89:14 I looked at the clock. A minute later when I glanced up, it was 89:42. We countered, ran, attacked, had chances, hit a goal post and no time seemed to pass at all. At 90:00 the stadium clock stopped and I suspect time did too. I had no idea how long those four minutes were.

Yet, despite time seeming to slow down, in an instant everything changed. In a slender, razor-edged instant. The entire stadium seemed to approach what the Celtic monks called “the thin place” and we suddenly passed through to an alternate reality that was impossible, unimagined and unbelievable. No one could have seen this coming. No one would have called it.

Even the manner of the goal at 94:13 was itself unique. Here was a long high ball coming into the box on the last hopeful gasp of the game. Toronto had been pretty bad through the whole match and had blown the Cup. This was a desperate buzzer beater. It arced into the area, arriving above the penalty spot in a kind of no man’s land. Our two most reliable players, Kendall Waston and David Ousted, decided to simultaneously do the responsible thing and take the reins of leadership. I would have expected nothing less of them. Ousted coming out into a space to claim a ball he could see all the way, calling out to Waston who was backing into him. Waston taking a bead on the ball and getting ready to attack it with one last trademarked headed clearance, probably not expecting his keeper to be as far out as the penalty spot playing that ball himself.

And then, Boom. Boot. Swish. Done.

I so wanted the story to end differently. Not just for our Cup, but for the year of curse breaking that had benefitted both the Whitecaps and Grimsby Town ever since we became magically entwined during last year’s final. Somehow last year we had broken the curse and won the cup, and Grimsby Town benefitted as well, finally winning promotion back to the Football League after six years of trying, with one of our own Southsiders, Steve Kavanagh, present at Wembley for the promotion final.

Last night we wished the circle complete, and Alice Venable, a visiting Grimsby-born university student armed with an inflatable Harry Haddock, Town’s mascot, stood with us in her GTFC shirt and helped us get that much closer to a perfect ending. Like a Persian carpet in which the weaver leaves a single flaw so as not to offend the perfection of God, one more second was added on. We only had enough charm left for 94:12 of football.

That was really something. Shock, pride, bewilderment, joy and despair separated by a mere second of time. Tears, screams, wailing and keening. Rending of garments and gnashing of teeth. Stoic surrender, and devastated capitulation.

Football is sometimes simply the most purely human thing and Drew is right: this thin place is why we love it.