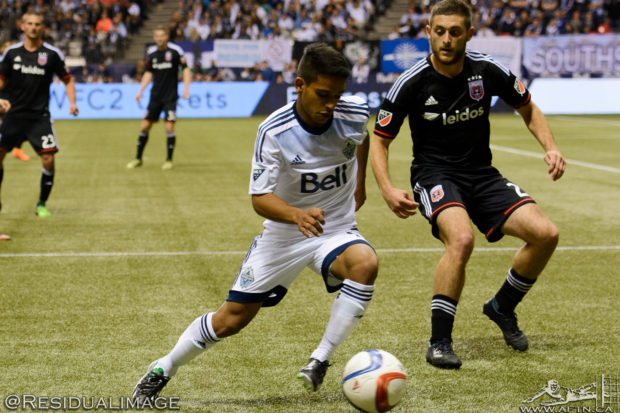 Well the season goes on, and the Whitecaps will be looking to continue their recent good form that they have been showing at BC Place. They were able to trot out a young and Canadian heavy line-up for the Canadian Championship on Tuesday. A new formation was tried and victory was won.

Now the young guns can give way to the veterans.

I think it was a smart ploy by Robbo to rest the first team in that game, even if we could have lost. We need to keep getting points at home to stay in the playoff picture, and it will be especially nice to perhaps thump a jet lagged and time differenced DC United. That said, they have been playing terribly recently and will want to steady the ship.

With another long trip to Orlando four days later to face fellow Eastern Conference competition, DC United could decide to rotate their squad, so the onus will be on the Whitecaps to push for the win. Recently they have been showing their flair by getting forward and making things happen, not just in transition but on set pieces as well.

Considering the amount of first team players that have been rested, and the success the recent steady formation and line-up has brought, it would be surprising if Robbo went away from the 4-1-4-1 that has been working recently.

We have seen the central midfielders of Matias Laba, Tony Tchani, and Andrew Jacobson break up attacks, but also get forward to support Fredy Montero and the wider players. They have been physical and smart, and it seems the chemistry between them has given an excellent dynamic. Although they are not overly technical players, I am not too worried as we tend to attack more from the wider areas than through the middle.

But that said, the big question this week will be, with Laba suspended, who will step into that central DM role if the formation is to stay the same? I could see Russell Teibert getting some time, but also could equally see Ben McKendry getting a start considering how well he did in the midweek.

But both may be saved for the second leg in Montreal on Tuesday, which would force a change in formation, reverting back to a 4-2-3-1, with Alphonso Davies coming back into the MLS starting line-up on the wing.

Montero is not getting too many goals, and although he can read the ball well, we are not really connecting with him in a way that plays to his strengths (combination play on the ground). That worries me a little bit, but then perhaps that will be Yordy Reyna’s job when he is no longer injured.

If I worry a bit about our strikers, I have all the confidence in our wider players, Cristian Techera and Christian Bolanos, who have been fantastic. The layoff chest to volley between them was a sight to behold, and speaks volumes about their technical quality. They may not be the strongest, but they are intelligent and get in the right spots to make use of those advantages. You do not always need to be a pacy winger, sometimes having a brain and ability to pass is better.

The backline also deserves praise. Kendall Waston and Tim Parker have continued to improve and it is nice to seem them making some better passes, and getting on the scoresheet from set plays. It is nice to see the Whitecaps stepping up on these set plays and I think they will become more important if Montero doesn’t produces. Although they need to sometimes cool it with the long balls from Waston, just look to get the ball to the touchline for either Techera or Bolanos.

Jordan Harvey and Sheanon Williams have been amazing, simply by quietly going around and making things happen on the defensive and offensive side. Williams has continued to get better and better, but Harvey I think is starting lose another step or two and may have to continue to adjust his game.

David Ousted is doing well and will obviously get the start, even if Spencer Richey just put him on notice that he is waiting in the wings to take over the first team role if there’s any slip in his play.

Will DC United rotate their squad for the trip to the west coast, with an eye on Wednesday’s game in Orlando, or will they try and get something going now and play their first choice line-up?

Can Bolanos and Techera continue to make magic happen?

Bill Hamid – A great shot stopper. If they can get out of Cascadia with a point or points it will be because he made some fine saves.

Nick: 2-0 for Vancouver. DC United seem to be in freefall and the ‘Caps need to take advantage of that.

Joe: 1-0 for Vancouver. DC are gassed from the long road trips.