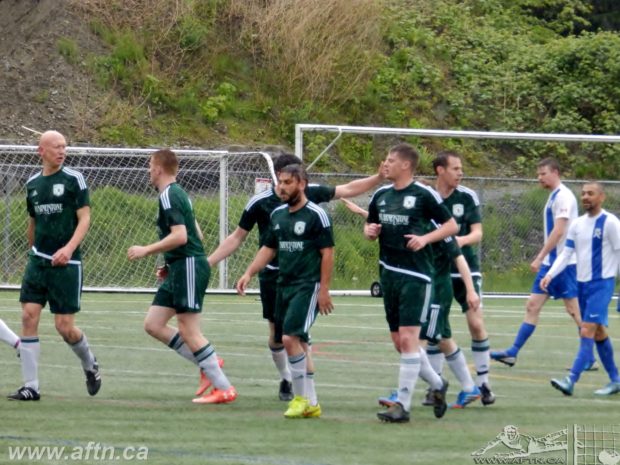 The 2017 BC Provincial Cups finally wrap up this weekend with the last two finals taking place at Burnaby Lake on Sunday.

The Deryl Hughes Masters final is an all-VMSL clash between Coquitlam Metro Ford PCE and Croatia SC, in a repeat of last year’s final. The Coquitlam lads won that one thanks to a dramatic stoppage time winner, so let’s see what this year’s final holds in store.

Kick off is at 3.30pm, so we’ll unfortunately miss that one as we’ll be at the WFC2 game in Langley, but we will be at the Keith Millar B Cup final between NVFC Norvan Storm and Vancouver Greencaps at 6.30pm that evening.

The B Cup final is another all-VMSL affair, meaning another clean sweep for VMSL teams this year, despite a stronger showing from the FVSL this time around.

It’s a final between two sides that know each other very well. Norvan finished second in VMSL Division 2B, five points ahead of the third placed Greencaps. The Storm looked to have promotion in their sites, but their run that saw them lift the VMSL Division 2 Cup, and the fixture congestion that came with it, saw them slip away from the title in the closing weeks.

The two league meetings between the teams were high scoring affairs so it could be a goal fest on Sunday. Norvan won the first encounter 5-3 in the second week of the season, with the Greencaps winning the return 4-0 in December. Let’s hope they serve up a cracking final.

Norvan Storm clinched their place in the final with a 2-1 semi-final win over Fraser Valley Red Devils at Burnaby Lake on Saturday May 13th. 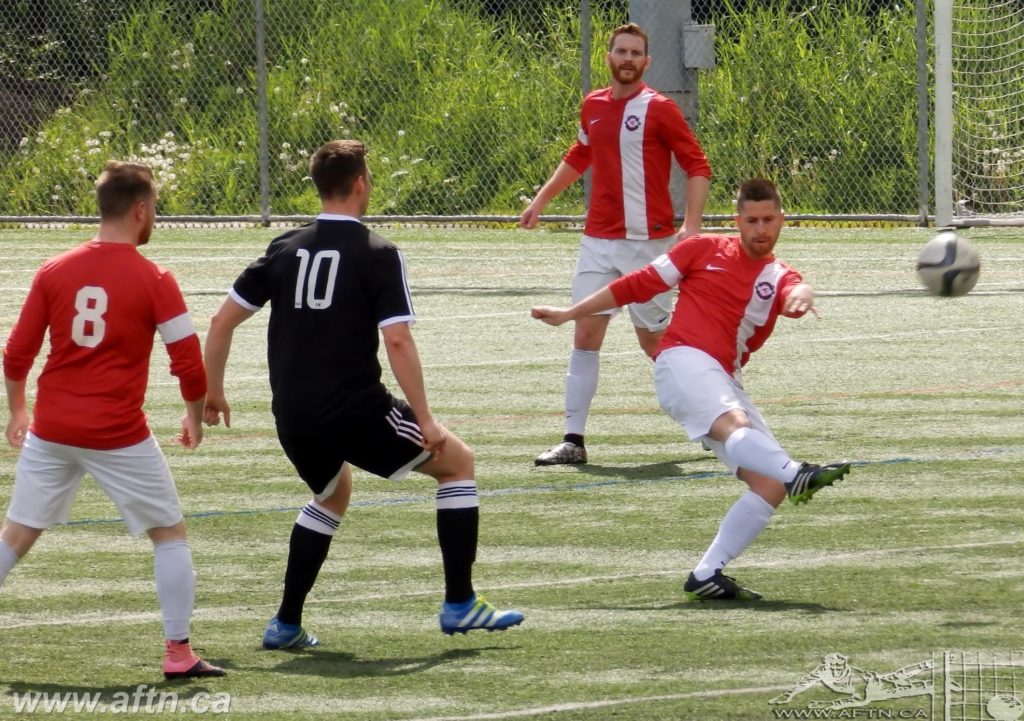 Norvan made the early running, with Daniel Bell coming closest in the 23rd minute with a shot that just went past the left post. After another close call, the Storm took the lead in the 32nd minute with a speculative lob from Chris Johnstone from around 40 yards out that flew over the head of the Fraser Valley keeper Atilla Davalovsky and into the net.

The Red Devils were only in the semi-final after their quarter-final opponents, Burnaby Metro Athletic, had been kicked out of the competition for fielding an ineligible player in their 2-0 victory. But the Fraser Valley side were keen to make the most of their second chance and fired themselves back level five minutes before half time when David Vanderhoek got on the end of a long ball forward, raced in on goal, and tucked it away past NVFC keeper Geordie Penman.

Norvan had chances to retake the lead just before and just after half time from Cam Richardson and Luca Bortolazzo, but despite enjoying the better play, the game was still delicately poised as it entered the final 20 minutes.

The VMSL side though were to grab what proved to be the winner in the 73rd minute and it’s one the Red Devils keeper will have nightmares about. Justin Siglos floated in a free kick, which Davalovsky was unable to hold on to and his fumble fell to Bortolazzo, who made no mistake from six yards out.

Minutes later Duncan Penman had two good opportunities to kill the game off, first beating the offside trap and needing to do better when in one on one, then seeing his fierce shot turned around for a corner.

The Red Devils pushed hard for the equaliser that would take the game into extra time, and Cam Mackinnon did have the ball in the net in the 88th minute from a free kick, but it was called back for reasons which I’ve still been able to work out!

Milan Francisty had the last chance for Fraser Valley four minutes into stoppage time, but his shot was deflected for a corner and NVFC came away with the 2-1 win and claimed their spot in the final.

You can see some of our highlights from the match in the video below.

NVFC Norvan Storm’s opponents were decided the following day, in a precursor to the U21 and A Cup finals.

In a match that was played for the most part in a torrential downpour, the VMSL v FVSL clash between Vancouver Greencaps and Poco FC Royals served up an entertaining match that belied the conditions.

And the game could have gone either way right till the end before the Greencaps came away with a hard fought 2-1 victory. 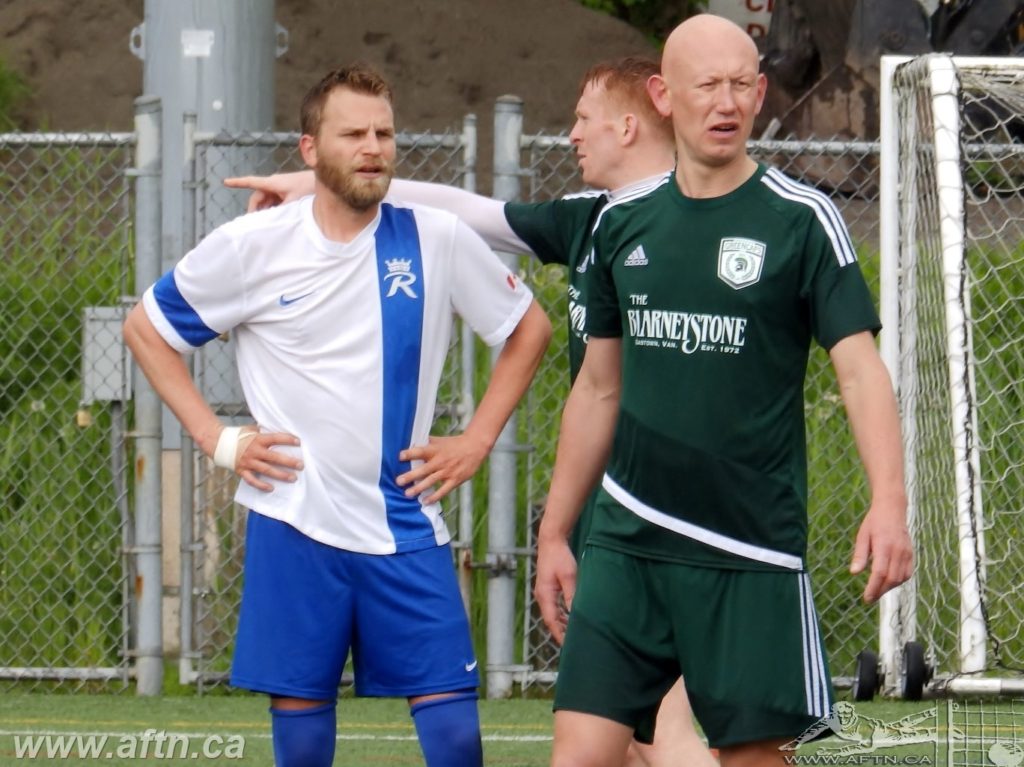 All the goals came in the first half with the Greencaps taking the lead in the 16th minute when Simon Scully cut inside in the box and drilled the ball home. It was a lead that was to last just two minutes before Jiri Jaspal brought Poco back level with a nice finish from a quick break.

The Greencaps retook the lead in the 31st minute when a long ball into the box was headed back into the path of Sasha Kogut who volleyed it first time past the Poco keeper for what was to prove to be the winning goal.

Chances were at a premium in the second half but Poco launched a last ditch blitz to try and force extra time with the Greencaps surviving a last minute penalty appeal for handball and a stoppage time header that was cleared off the goalline with the keeper beaten.

But survive it they did and they move on to face NVFC Norvan Storm in this Sunday’s final. Should be a cracker!

You can see two of the goals and a couple of other highlights from the Greencaps win in the video below.