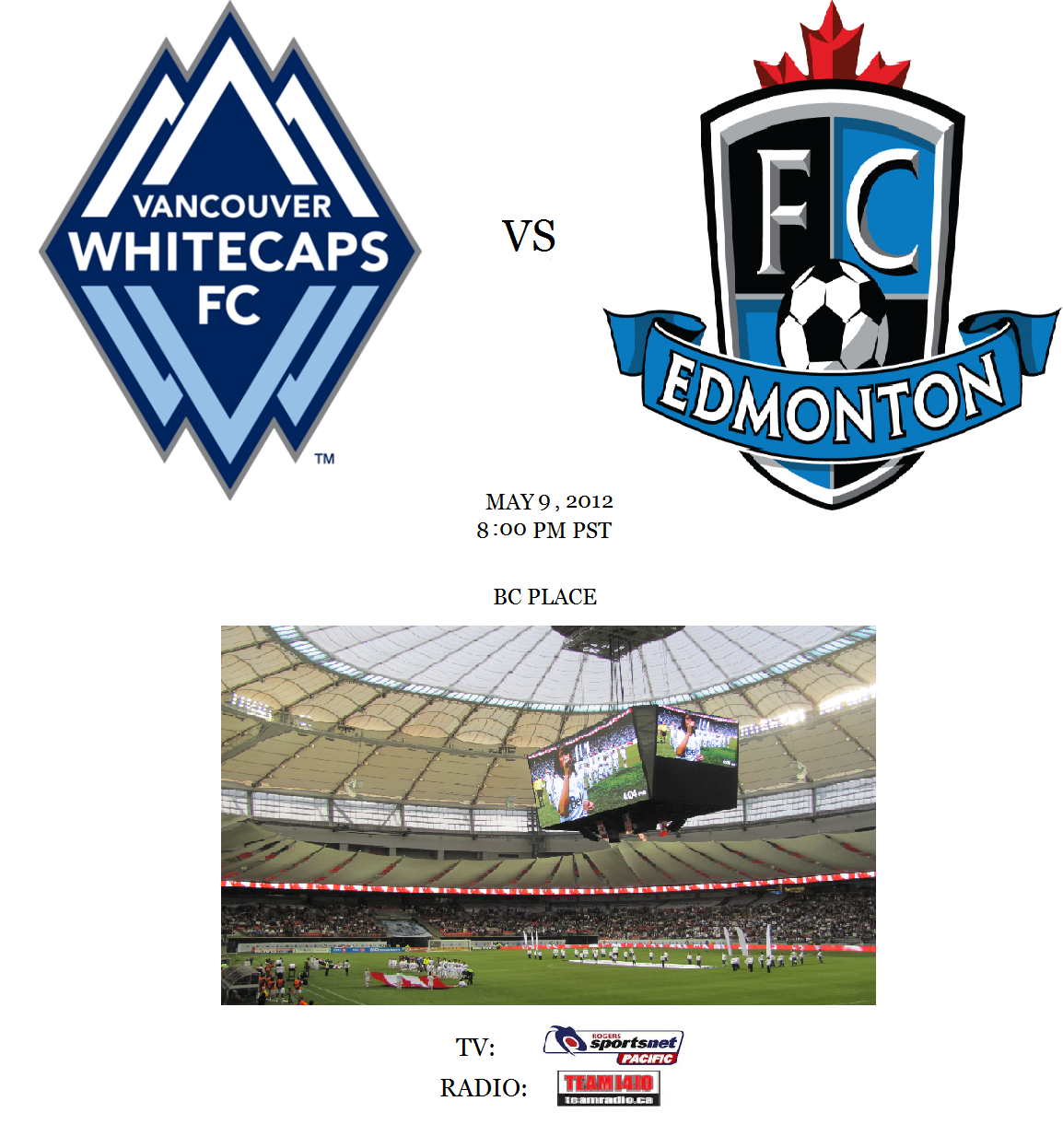 After a dramatic win over San Josethis weekend, Vancouver Whitecaps return to Voyageurs Cup action as they host FC Edmonton in the second leg of the Canadian Championship semi-final.  The Caps hold a decisive lead over their Western Canada rivals, after Eric Hassli and Atiba Harris gave them a two goal away advantage.

ATTACKING
The two time U17 Canadian player of the year, Russell Teibert, has yet to play for the Whitecaps in MLS this year but could make his season debut in this Voyaguers Cup semi-final.  The match could be an opportunity for Teibert to prove that he deserves more minutes with the first team.
Former Residency product, Kyle Porterwas a dangerous player in the first leg but was unable to find the target on his multiple attempts.  It will be his first time playing in Vancouversince he left prior to the 2011 season, and he will look to take down his former club.
DEFENCE
With Rochat resting after two starts, it will be Carlyle Mitchell who becomes the defacto leader on the backline.  If he is partnered with Michael Boxall, Mitchell may have to compensate for the Kiwi defender’s lack of pace and that could play a factor against a speedy FCE frontline.
The two goals allowed in the first leg, especially the opening goal, could be considered stoppable by keeper David Monsalve.  If the Eddies have any chance of advancing to the Final of the Canadian Championship, the Ontario native will have to have a perfect game against the Caps.
WHO’S ON FORM :
It took some time but Eric Hassli seems to have gotten back on track when it comes to scoring, with two goals in his last two matches.  Hassli will once again face the smaller FCE backline and look to wear them down and create space for the smaller attackers to run in to.
Helping Edmonton get their first win of the season against Carolinaat the weekend, Shaun Saiko picked up a hat trick and was named the NASL player of the week for his efforts.  Vancouver’s defenders will have to track the local Edmontonproduct as he is capable of scoring from distance with power and touch.
2012 RECORD :
Vancouver:
5W-2D-2L
3rd in Western Conference
Last Match: 2-1 Win vs  San Jose Earthquakes
Edmonton:
1W-1D-3L
6th in NASL
Last Match: 4-3 Loss vs Minnesota Stars
PROJECTED LINE-UPS : 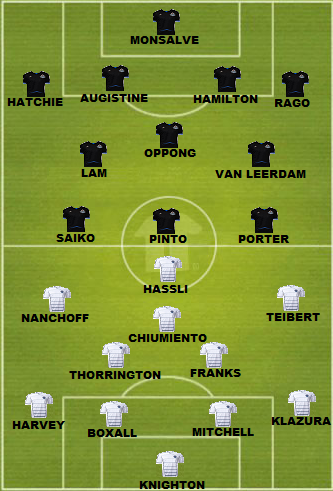 GAME PREDICTION :
While the stats may indicate an easy win for the Vancouver club, FC Edmonton competed well in the first leg but were unable to finish their chances.  Omar Salgado played a huge part in this match, finding Hassli alone in the box for the first and hitting the post with a chip which then broke to Atiba Harris to sweep it in for the second.
The lineup will have some changes from last week’s match but expect Brad Knighton to get his second start against Edmonton.  In front of him will be Carlyle Mitchell, Jordan Harvey, Greg Klazura and Michael Boxall, who will make his first start of the season, having impressed in Friday’s PDL game against Kitsap Pumas.
The midfield should have only one change from last week as Thorrington and Chiumiento will start with either Floyd Franks or Bryce Alderson starting in Koffie’s place.
The front line will have some changes as well. Salgado has earned a rest and Harris suffered a knock and may not be ready.  A couple of first time starters could flank Hassli, with Michael Nanchoff and Russell Teibert looking poised to make their first starts of the season.  After being passed fit to play, Darren Mattocks, injured due to a freak cooking accident, could be a wild card off the bench for the Whitecaps and Etienne Barbara has been added to the Caps’ squad for the tournament, after coming through the second half of the PDL game unscathed..
Both teams are coming off highs. Vancouverwon dramatically and Edmonton picking up their first win of the season over Rennie’s former club Carolina.  Edmontonwere able to put all facets of their game together, holding firm defensively whilst Saiko was able to score three times.  However they will not be able to rotate through their roster and may be playing on tired legs, playing their third game in eight days.
The trio of Nanchoff, Chiumiento and Teibert are all interchangeable so look for those three to line up on the right, in the middle or to the left behind Hassli.  Rennie will want Nanchoff, Teibert and Thorrington to raise the tempo of the attack in order to wear down the FCE defenders over the ninety minutes.  The space in the final third will be even better if the defenders decide to collapse on Hassli and the Frenchman can find someone on a run.
With players like Lam, Porter, Pinto, Saiko and Van Leerdam always looking to shoot from distance, a key in stopping Edmontonfrom scoring will be the holding midfielders clogging up the area in front of the box.  The only serious danger when it comes to defending in the box on set pieces will be Paul Hamilton, who is only Eddie that comes close to scoring with his head.
The Whitecaps should be expecting the visitors to throw everything at them in the first fifteen minutes in order to get close on the aggregate score.  If Vancouvercan stay patient and hold their lines, they will be able to find chances on the counter and cement their place in the final.
AFTN Predicted Score: VancouverWhitecaps 3  FC Edmonton 0
Tags: canadian championship, Cup Football, fc edmonton, football, major league soccer, MLS, nasl, soccer, Vancouver Whitecaps, voyageurs cup