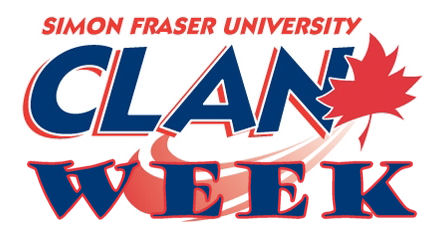 For the second year running, Simon Fraser University Clan are back in the NCAA II ‘Final Four’.

After last year’s historic achievements, the Clan head off to Georgia early on Monday morning looking to go two wins better and become the first Canadian school to land a NCAA Championship.

As you would expect they face a difficult path, but with no home postseason matches these past two years, and with the experience learned from last year’s endeavours, it’s a challenge they feel they’re not only ready for but can achieve.

We’re celebrating their achievements with our second annual Clan Week here on AFTN.

We kick off this year’s Clan Week though with a review of the 2013 season so far. The highs, the lows, the standout performances and we get the thoughts on the season from Coach Koch.

Last year was a historic one for the SFU Clan.

After serving their NCAA probationary period they were allowed to take part in the Division 2 postseason tournament for the first time. Turning many heads and garnering a lot of press attention along the way, the Clan set a number of firsts before bowing out at the semi final stage.

The pressure was immediately on to build upon that success this season.

As players moved on and a new crop of talent both came in and along with existing players rose to the fore, SFU took a few weeks to fully gel and hit their stride, before eventually clinching their fourth straight Great Northwest Athletic Conference (GNAC) Championship at the start of November.

“It’s been an interesting season” is the summary by head coach Alan Koch. “We didn’t really know what to expect this year with bringing in so many new players. I think any time you do that there’s an element of uncertainty as to how the season is going to go. We did know that the guys we were going to bring in were good, quality players. Mature guys too.”

When SFU took to the pitch in an eagerly awaited preseason friendly against CIS champs UBC Thunderbirds in August, they found themselves on the end of a comprehensive 3-0 thumping.

Despite a ten day preseason trip to Costa Rica, the Clan squad looked a little out of sorts and not only a shadow of the side that had gone deep in the postseason the year before, but they were also unrecognisable to the team that you will see take the pitch in Georgia later this week.

“It did a little time to integrate them” admits Koch. “I didn’t think we looked very good in August, but we’ve really got better and better as the season’s gone along and we deserve to be in the Final Four.”

It was understandable as several players had left the program, including some key seniors. With many new players coming in, the 28 man squad now contains 20 Canadians, with 16 of them from BC. The remaining eight come from seven different countries for a truly international feel.

All that said, it didn’t stop the new look squad getting off to a storming start resultswise, winning their first eight competitive games.

The scorelines were, on the whole, a lot closer than what we had seen the season before, with five of those eight wins being by a one goal margin.

Then came the first eagerly awaited big rivalry game of the season against Seattle Pacific down in Washington and the Clan were given their first defeat of the season in a 2-1 loss.

The next seven games saw SFU record six wins and a draw, conceding only three goals along the way. In amongst that was a stunning three game, 21 goal display that saw them rout SD School of Mines, Northwest Nazarene and MSU-Billings all by a 7-0 scoreline.

That set up the home return against Seattle, with a win securing a fourth straight GNAC title. It took the Clan 106 minutes to find the breakthrough but when Jovan Blagojevic poked home the winner for a 1-0 win it sparked the celebrations you can see below.

Championship secured, the Clan came out flat a week later and went down to a 3-0 defeat to Western Washington, with all three goals coming in the opening 14 minutes.

It was a defeat that saw them crash from being ranked 2nd nationally to 12th and saw the Clan finish with a 15-2-1 regular season record, 11-2-1 in conference play.

Being the only Canadian university in the NCAA, SFU know that they always have a target on their back. Whether it’s from US colleges wanting to beat them for American pride, their Conference rivals wanting to take down the current champs or from some people within Canada who want them to fail for what they perceive as turning their back on the CIS and Canadian college system.

It all spurs them on and they do their talking on the football pitch.

“We had a huge target on our back this year, obviously having won the GNAC before. Our Conference game our non Conference games, everybody wanted to beat us.

“We lost a couple of games and I think that’s a big part of it. Those teams were hungry to play against us, but I think we’ve learned a lot through that and it’s definitely helped us in the postseason where we have that focus of we’re used to playing on the road, it doesn’t matter how good or how bad the teams are we’re playing against, we’re going to go out and get that result.”

And they certainly have done, but it does also mean that they often have to achieve their successes the hard way and that is never more than true than when it comes to postseason play.

SFU have still never been able to play a postseason game in Canada, despite earning ‘home’ advantage in 2012 and having to play in California.

This year the two losses proved very costly, but the NCAA farcical rankings system also played a part. Despite being ranked as high as number two nationally in the coaches rankings this season, the selection committee continually ranked SFU as fourth in the West.

It’s something we’ve struggled to get our heads around but coach Koch explains.

“Yeah it’s bizarre. There’s two different ranking systems. There’s the NSCAA, which is the coaches poll, which is subjective. There’s a bunch of coaches in each region who sit on it. They decide who’s ranked where in their region, and they submit it for the national voters and they vote to figure out where you should be.

“I don’t think it’s the most accurate formula to determine rankings or seedings, but it’s what the NCAA uses for the NCAA national tournament so that’s why we were seeded 4th.”

When the selection show was all played out, it left the path that SFU needed to follow for NCAA Championship glory.

That path kicked off in Los Angeles on November 14th when they thrashed the 5th ranked Cal Baptists 5-0 in their first round match up. Two days later, they were back on the same pitch to take on the hosting top seeds Cal State University Los Angeles. They were made to work harder and the Golden Eagles fought back to take the tie into extra time before another 106th minute winner, this time from Carlo Basso, saw the Clan advance into the ‘Sweet 16’ with a 2-1 win.

SFU’s fighting spirit was to come even more to the fore six days later when they headed to Denver to take on the University of San Diego Tritons for the western regional title and a place in the ‘Elite 8’.

The Clan came out a little cold in the chilly altitude and as the game ticked into the 87th minute they were a goal down and things were looking bleak. But fighting to end, Blagojevic got on the end of a Magnus Kristensen cross to send the game into extra time and eventual penalties.

In a tense shootout, it was the Clan who held their nerve to advance 4-3 on penalties and with the hard work done they destroyed the hosting Regis Rangers 5-0 in their quarter final tie to seal a return to the ‘Final Four’.

It’s been quite the achievement and the Clan’s players and management have picked up a number of awards along the way.

All three players were named to the Conference ‘First Team’, with five others making the ‘Second Team’.

Bargholz and Kristensen also made the All-West Region first team, with Rowley and captain Marco Voegeli being named to the second team.

Despite the individual honours, all of the Clan squad talk about how much of a team effort the whole thing is.

And that is clear to see in the stats.

In their 22 games so far this season, SFU have outscored their opponents 75-17, with 16 different players finding the scoresheet.

The goalscoring lead is currently shared by Jovan Blagojevic and Colin Jacques who both have ten apiece, but right behind them is Ryan Dhillon with nine and last year’s top scorer Carlo Basso with eight.

Jacques is also leading the team in assists with nine, two ahead of Alex Rowley. There are 15 players in total who have provided assists this year, which coupled with the goalscoring exploits make SFU such a hard team to play against as the danger comes from all over the pitch and it runs deep.

On the goalkeeping front, the Clan have kept their opponents scoreless in 11 of their 22 matches. Rookie Brandon Watson has seen the most action, with the Victoria native playing in 18 games and keeping 7 clean sheets.

It’s all impressive stuff once again and the next test for SFU will come on Thursday evening when they take on Carson Newman Eagles at 5pm PT in the semi final, which we’ll preview later on this Clan Week.

If SFU can go all the way in Georgia and bring home the NCAA championship, not only would we have the first Canadian champions but it would mean that both UBC and SFU would be champions of their respective Leagues.

With a rematch between the two teams scheduled for March, that would make for an even more tasty match than it’s already shaping up to be.

Whatever happens now in Georgia, SFU have once again done BC and Canadian football proud. If they can go on and get those two more wins then they’ll also make history on top of that.