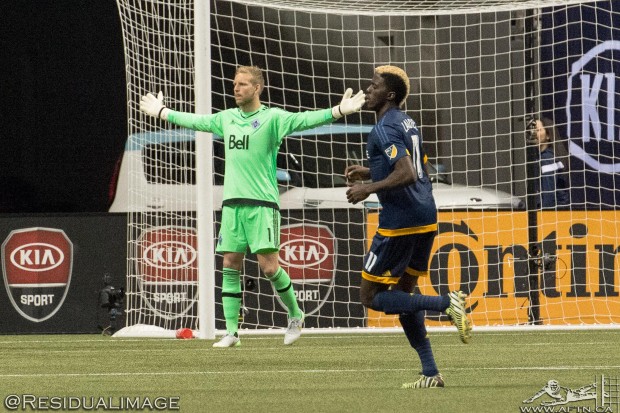 Can Vancouver Whitecaps make it three wins on the bounce? LA definitely seem to bring the best out of Vancouver’s players when the Galaxy come to town. With a couple of their top guys missing, it’s a great chance for the ‘Caps to continue their recent winning ways, but can they finally get that elusive goal from open play?

The ‘Caps have gotten their first win at BC Place. That is another monkey off the back of the team, who can now look forward to perhaps trying to make it the fortress it was in previous seasons. Another pleasing aspect of the Houston game was the number of players who stepped up to help get the result with four starters missing to international duty. Sure Houston were not playing their full squad either, but it is a good sign towards the depth on our bench.

The Whitecaps have now got two wins in a row. Which is great; both of those wins came with the formation switch to a 4-4-2. However, so far no goals have been scored from open play. Also, recently we have benefited from some (lucky) penalty calls coming our way. Many of the starters are still perhaps adjusting to this formation, however things are looking promising. It looks like chances can be created, and it was (mostly) defensively solid. Given how well some of the team played against Houston it gives Robinson some decisions to make.

LA Galaxy have two losses and two wins as well. For the most part, the Galaxy have the attacking personnel to get on the scoresheet (9 goals so far), but they have shown weakness at the back, with six goals conceded; they like to play the 4-4-2 as well. As seems to be the norm, they have a number of big names they brought in (Ashley Cole, Nigel de Jong) along with a splattering of lesser known players (Jelle Van Damme) to go with their established MLS players like Robbie Keane and Mike Magee and rising stars such as Sebastian Lletget and Gyasi Zardes.

It seems that they are trying to figure out how to fit all these players into the side so that they can work together, while getting ravaged by injuries (Gerrard, Dos Santos, Keane, Kennedy, Villareal). The result has been that over the course of these games the line-up has been changing, as they try to get the best out of what they’ve had available.

Another game, more questions. Those who stepped into the Whitecaps starting eleven did well against Houston. And it seems that Robbo is going to stick with the 4-4-2 formation. If it is winning games stick with it! I don’t see any need to change back (although perhaps he will keep his trusty old 4-2-3-1 in reserve for away games).

In goal it is the one, the only, Great Dane: David Ousted. He had a strong showing against Houston (even though the woodwork was being kind to the Caps that game), with a couple of key stops that saw him standing tall and grab his first clean sheet of the season.

The backline at this point is solidifying. Fraser Aird and Jordan Harvey are locks to continue on the outside. I really liked the attacking crosses and linkage play Aird was getting in against Houston. Hopefully he can continue that process. He has been getting caught out less and less every game. He may yet be the right back the ‘Caps have been looking for (and the Canadian Men’s team for that matter).

Harvey was solid again against Houston and has been looking the most consistent Whitecaps player over the first four games. He has locked that side down every match and is making intelligent attacking decisions.

As for the starting centre back pairing, it was nice to see Pa Modou Kah and Andrew Jacobson step in so well (8 aerials won and 4 tackles together). Although I was a bit worried at the start, they both made smart decisions, dominated the air, and won some last-ditch tackles. The only thing I didn’t like was Jacobson’s propensity to dribble the ball out of the back (must have still thought he was a midfielder!). It was nice to see them, but you have to go back to Kendall Waston and Tim Parker (who should be commended for his good performances against Columbia for the US U23s).

In the midfield, I found an interesting statistic: Pedro Morales had 3 tackles against Houston. It seems he is stepping into the deep-lying playmaker role well, and helping out with the transition in the midfield. If he can win the ball and make the insane passes he can make it will be all the better for the Whitecaps counter-attack. It was seen in that game with his amazing balls to Masato Kudo. I want to see more of those over-the-top diagonal passes – they were so key in getting scoring chances!

Beside him will be his new partner Matias Laba. He is doing well, covering the backline and giving a license for Morales to roam. In addition he continues to adapt to the 4-4-2 formation; I look for him to get better and better. He will give a solid defensive spine to the team.

Cristian Techera did well combining not only with Aird but also on any moves he made towards the middle with Octavio Rivero and Morales. He has shown he’ll give the Caps good service on the wing and a nice creative option, however with Bolaños coming back, the Costa Rican should be getting the start, unless he is deemed to need a little rest after his international exploits and may be used off the bench for this one.

On the other side, I am not sure what is happening to Kekuta Manneh. He is not the goal threat he was last season and seems to simply run into defenders. His poor vision and lack of passing is continuing to hamper him. Now that he is playing deeper we really need someone who understands when to make a pass after you have sucked in three opposition players.

Perhaps he is still learning the position? Or maybe the injury has taken more out of him than we realised. The problem is, who do we put into there instead?

Techera is the obvious answer if he’s not on the right, but if he is, who? Erik Hurtado? I don’t trust him enough to be better tactically then Manneh, or be a better passer. Manneh is lucky that he is on the side with the stellar play of Harvey covering for him. Bustos? He is more of a central player. Bolaños ? Perhaps he could take Manneh’s spot and let Techera be on the right. However he doesn’t bring the direct counter attacking threat that Manneh does. For lack of a better option he will likely get the nod, because he has proved time and time again he can single handedly win a game (think of those multiple times against Seattle and even against LA).

Up top is another interesting question.

Kudo’s suspension hits the Whitecaps options to make a significant change. Seeing Kudo start last week, he took the game by the scruff of the neck to try and get something happening. His runs he made in the box were dangerous and he was continually making space for other players to get into dangerous positions. Part of me wants to see what Kudo and Perez would be able to do together; both are crafty (one uses crafty moves, the other is crafty with his physical presence). I think they could complement each other very well. We’ll have to wait for that pairing now however.

Rivero has been getting into good places. But damn man, he needs to score! Hopefully whoever stole the Whitecaps boots took away his non-scoring boots. Now, the problem is that I like Rivero’s work rate, and his hunger. His movement is not that bad and he has a good physical presence. He just needs to put it in the back of the net; that is what his Designated Player contract was for. Unfortunately, he is just not living up to what he needs to do. In the MLS Salary Cap world, as a striker you need to score, otherwise you’re going to be moved.

He’ll continue to get the start this week, but the big question is do we see him with Perez again like in Seattle or on an island as in the first two games? With the success the last two week’s you have to feel it’s the former.

LA seem like a bit of a mess right now. Dos Santos, Keane, Gerrard, Kennedy, and Villarreal are all injured (and could all have been starters). But hey, sometimes that stuff happens when you hire super old looking for retirement players (I kid). But these injuries will be good for their Academy products to win some starting places; Zardes may actually be played in his proper role as an out and out striker. And Mike Magee may also be getting that start as a striker as well. He’s always dangerous and one for the ‘Caps defence to watch out for.

Besides, sure they may be old, but so far de Jong and Cole have shown their age to have a quality all of its own. These older players so far have played well and proved their detractors wrong.

With those players out, it will be interesting to see who they put on the wings to get chances to the two up top. I liked what I saw from Lletget on the wings last year so he may get the start out there. With Gerrard gone, Baggio Husidic may step into that section.

The bottom line is this, if LA Galaxy are so weakened, the Whitecaps need to win this game. Not only that, but LA have let in many goals from open play. So if there was a time to find your scoring boots, it should be now!

Will Blas Perez get the start in a two striker set up, or will Rivero be on an island once more?

Can Kekuta Manneh get back to his game winning ways and rise to the big occasion once again?

Will the ‘Caps finally score from open play?!

Gyasi Zardes may not have the best touch, but when he is a striker he can use his physicality and movement to make space for others. With Robbie Keane missing out through injury, LA will be looking for Zardes to be their key attacking threat on Saturday night.

Dan : 3-1 Whitecaps – Kudo, Techera, and Harvey, while Zardes gets the consolation for LA

Leave your predictions below!