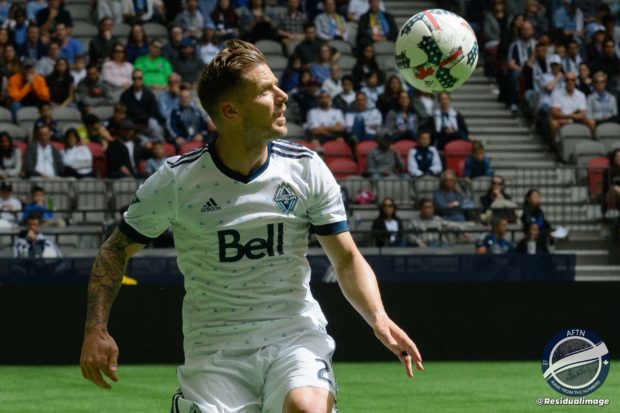 The NHL playoffs are upon us, and the Canucks have done the Whitecaps the wonderful favour of being an awful team, focusing all of Vancouver’s attention on BC Place as the lights go out at Rogers Arena until the fall.

With Sporting Kansas City winning their last game, pulling ahead of Vancouver for first place in the West, the Whitecaps return to Vancouver after two straight matches on the road.

After a disappointing defeat in Utah, the ‘Caps will look to rebound as they host the expansion Los Angeles Football Club for the first time, who are currently sitting in 5th place in the standings.

Friday will also mark another homecoming, as Jordan Harvey makes his return to BC Place for the first time since being traded from Vancouver in the offseason, while former ‘Caps defender Steven Beitashour is back in the Western Conference after a brief stint with Toronto FC, partnering with Harvey in this one to form an ex-Whitecaps fullback pairing.

Manager Carl Robinson has some intriguing personnel decisions to make after a less-than-stellar outing at Real Salt Lake. Kendall Waston had a decent game at the Rio Tinto, while his partner Jose Aja had perhaps his worst outing as a Whitecap.

Aja stood by and watched as an interceptable cross easily found its way onto the boot of Jefferson Savarino in the 89th minute for what would end up being the match winner. Aja was not a favourite of Orlando City fans in his time in Central Florida and has unimpressed with the Whitecaps. I’d like to see Aaron Maund get back into the line-up, or perhaps get a look at Doneil Henry if he’s match fit.

The fullbacks will likely remain the same, and I’d hope de Jong performs better than he did against RSL. Eighty Six Forever’s Samuel Rowan suggests swapping Aja and Waston so that de Jong and Aja don’t have to cover the same side, but I’d rather just see better defending from the two.

Jordon Mutch had an excellent game in Columbus, and I would love to see him get a look against LAFC in favour of Efrain Juarez, who has been wholly mediocre during his time with Vancouver, and had an outright lazy game in Utah, rarely tracking back or marking, while also creating nothing of interest offensively.

Mutch has shown much more of a creative spark and intensity in much less playing time and deserves the nod over Juarez alongside mainstays Felipe and Russell Teibert. Injury prevented him travelling to RSL and it’s unlikely he’ll be good to go for this one sadly.

I can’t imagine Mezquida gets another start, as the midfield was sorely missing Teibert. With Reyna likely still out, of the starting line-up at least, it will be interesting to see whether Robbo opts to start Brek Shea over one of Alphonso Davies or Bernie Ibini, as he has impressed in the early going of the season, scoring his third goal last weekend, and he is already just one short of his 2017 season total. Davies and Ibini have been effective options off the bench, so I wouldn’t hate to see Shea get a start, especially if he continues scoring at this pace.

Los Angeles’ newest club started the season 2-0 before two tough losses, a blown lead at Galaxy orchestrated by Zlatan Ibrahimovic, and a 5-0 battering at the hands of Atlanta United last weekend. A close, come-from-behind loss followed by a blowout is demoralizing, but LAFC are not a bad side and have shown real quality, especially in their second game of the season when they defeated Real Salt Lake 5-1. They are an expansion club, but Atlanta United have proved that expansion teams can be successful.

Personally, I think the Whitecaps will come away with three points on Friday, but I don’t think it’ll be easy. LAFC have the ability to rip teams apart when they don’t defend adequately, and if Aja and de Jong don’t adequately protect the left side of the pitch from the dangerous Vela, LAFC could come away with some excellent opportunities and as seen against RSL, they’re more than capable of capitalizing on those chances.

The visit to RSL may have been a disappointment, but the ‘Caps are still undefeated at home in their last 11 matches and will be determined to ensure that remains the case.