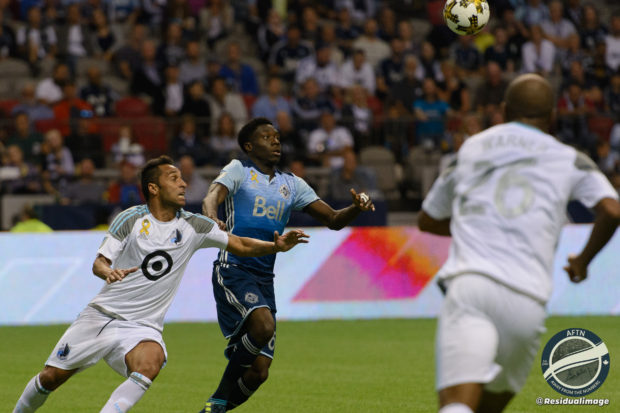 It’s not time to panic just yet. We’re getting there, but the obituaries for the season have been put on hold after a 2-0 win over Montreal Impact saw the Whitecaps dominate a game for the first time in what feels like forever – and without their star man, no less.

Said star man, Alphonso Davies, will make his return to the Whitecaps line-up after the conclusion of a transfer saga which could earn the ‘Caps as much as 22 million US Dollars from German powerhouse Bayern Munich. Davies will remain with the club until the conclusion of the 2018 MLS season, after which he will head across the pond to link up with some of the biggest names in world football, like Thomas Muller, Arjen Robben and Manuel Neuer.

For now, however, Davies is squarely focused on the task at hand – turning the Whitecaps’ season around. That task begins on Saturday against Minnesota United.

The Whitecaps are hosting their Pride Night at this match, and that really is something that makes me proud to be a Whitecaps fan. Somewhat poetically, opponents Minnesota United employ the only openly gay player in the major North American sports in young midfielder Collin Martin. It would be lovely if he were able to get into this match.

Davies is almost a lock to feature, as he’s been heavily marketed on Whitecaps social media in the past few days. With the move to Bayern imminent, the club seems to be fully pushing BC Place as the home of the Alphonso Davies Show, encouraging fans to come out to the ground and see this incredible talent while he’s still in a Whitecap jersey, with an additional don’t forget to pick your own one up at the same time!

The back four is almost set in stone at this point. Poor Jake Nerwinski has barely gotten a minute to rest in the past couple of weeks, but he’s young and spry, and won’t be complaining about the playing time. His partner on the left side is likely to be Marcel de Jong, with Doneil Henry and Kendall Waston in the centre of the defence. Henry has impressed, and for my money is the clear number two centre-half alongside Waston, and not just on his jersey. Although it has to be said that Waston still looks a little rough around the edges after returning from the World Cup in Russia.

The midfield is a little murkier – Alphonso Davies is all but certain to feature at some point out wide, but whether that will be as a starter or off the bench remains to be seen. His noted lack of training over the past ten days would indicate the latter option as the more likely route.

After sitting out midweek, Felipe should be back in the centre, but the other midfielders could be anyone. Personally, I would select Cristian Techera on one wing, but Russell Teibert and Aly Ghazal are just as likely to feature, and Brek Shea is always an option on the wing if Davies starts on the bench.

Typically, Kei Kamara is the main central forward with Yordy Reyna playing in a secondary striker/attacking midfielder type of role, and I see no reason for Robbo to change that, especially with the way Reyna has been playing of late, and the disappointing performances of Nicolas Mezquida and Anthony Blondell this season.

Adrian Heath typically prefers a 3-5-2, the formation du jour in world football, for his Minnesota United side. The Loons have been bitten by the injury bug but will have no trouble fielding a good side, with key players like Christian Ramirez, Darwin Quintero, and Miguel Ibarra available.

They also have a shiny new Designated Player to show off in Angelo Rodriguez, recently acquired from Deportes Tolima in the Colombian first tier. And as I’ve mentioned, it would be really special for Collin Martin to feature after he missed out on his own club’s pride night.

For some reason, I don’t feel as gloomy as I have in recent weeks about this club – and with the departure of Davies looming, these seem like as good times as any to be gloomy. I just feel like things are going go right on Saturday. Whether they stay that way, I have no idea – but I certainly hope so.