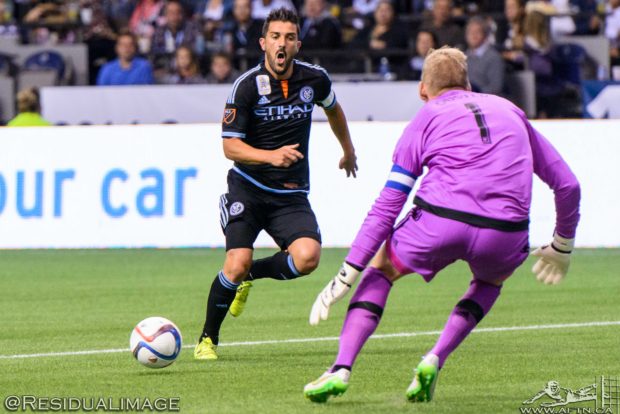 The Whitecaps fly off to New York after an odd encounter midweek versus Sporting Kansas City. The ‘Caps got a point against a team above them in the standings, but this fixture should really feel like a missed opportunity for both clubs. Peter Vermes realized this after fielding his weakened team and duly subbed on his three best players to no avail.

The Whitecaps showed quite a bit of menace after going down to 10 men; you couldn’t really say that Kansas were dominant. Teibert and Laba were outstanding in closing down the space and creating forward movements. The problem was again the lack of ideas going forward.

A word on the Kendall Waston red card: we really can have no complaints. Both tackles were at least yellow cards and he was playing on the edge all night. Kendall will be missed on Saturday against New York City, but Pa-Modou Kah came on and was very impressive.

NYCFC are coming off a heart breaking injury time Dominic Oduro equalizer at Yankee Stadium this week. It’s fair to say that things haven’t been too rosy for Arsenal and France legend Patrick Viera during his management debut. The team signed Andrea Pirlo and Frank Lampard last summer, but Pirlo has been pedestrian and Lampard has missed more games than he has played. It’s a typical case of paying for a player’s reputation rather than what he has to offer. The mixture of these philosophies sees NYCFC on 7 points for the season, with only 1 win in 8 games.

The team rely heavily on the industry of David Villa, who after World Cups and Champions Leagues probably cannot believe he is trying to bounce one-twos off of Tommy McNamara and Kwadwo Poku. Villa’s eye for goal has never left him, so he will likely be the focal point of the NYC attack.

Wednesday saw the return of Robbo’s 4-2-3-1 formation. As I suggested in the previous match preview, the 4-2-3-1 was used to exploit the numerical advantage in midfield, but the plan broke down in the lack of a dominant striker.

New York City also play something that resembles a 4-3-3, therefore we could see the 4-2-3-1 from Robbo again, only this time we could have Rivero up front. If not I expect a return to a 4-4-2, but I doubt it.

Cristian Techera and Kekuta Manneh are the two standout wingers in recent weeks, and because this fixture is a great opportunity to pick up points, I believe they should get the start.

Homecoming hero Tim Parker will likely have Kah by his side, with Jordan Harvey and Fraser Aird on either side. Aird really has come on in leaps and bounds, if only we could unlock a little bit more of his offence.

The interesting discussion comes in midfield. Mati Laba will obviously be in the ball winning role, the question is does Pedro Morales play alongside him in the deep lying playmaker role or in the number 10 position? Does he even make the trip at all? If he sits deep we can get Mezquida in the game, and if he advances, Russell Teibert can fill in beside Laba. I would prefer the first option as Mezquida has looked the more promising going forward.

If Morales doesn’t make the trip then Mezquida will play the number 10, with Andrew Jacobson coming in to face his old team in the DM role.

The key this weekend should be about pace. How fast can we get the ball forward and create chances without dilly-dallying on the ball so the defenders can get set up. The NYCFC backline aren’t the best, so we really should put a couple past them. Rivero, I’m looking at you.

Another key to dominating this game will be the midfield battle. We have the firepower to control this area. From what I have seen, NYC are sloppy in possession and often revert to playing it long. We really should be able to assert our dominance in this fixture. If not, it might be time to sound the alarm.