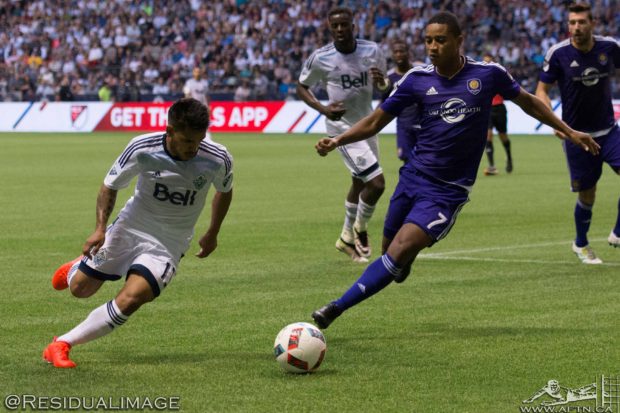 Depending on how you look at it, the Whitecaps are either unbeaten in their last five, or have only one win in their last six. The former conjures images of a strong, somewhat dominant stretch, while the latter screams abject terribleness. The truth is somewhere in between, as the ‘Caps recent propensity for hard-fought draws means points have been both stolen and thrown away, leaving fans with a middling trail of results to ponder.

This mediocre run has left the Whitecaps smack dab in the middle of the Western Conference, 6th in points but with more games played than everyone around them. The ‘Caps aren’t bottom-feeders like Colorado, San Jose, and (fingers crossed) Seattle, but if they are to end up in the playoffs come the fall, some more wins will be required.

The next chance for a win comes Saturday at BC Place, where the Whitecaps will host Orlando City. The ‘Caps are 2-0-1 in MLS play against the Lions, who last made the trip to Vancouver in 2016. That game ended 2-2, and included Orlando missing a penalty, Masato Kudo being named Man of the Match, and 15-year-old Alphonso Davies making his MLS debut. Much has changed since then, as only three of the twenty-two players who started that game still play for the same team (Kendall Waston, Nicolas Mezquida, and Orlando keeper Joe Bendik).

Unfortunately for the ‘Caps, Waston will be unable to reprise his role on Saturday, as he is currently with the Costa Rica National Team in preparation for the World Cup. José Aja and Doneil Henry held down the fort well enough against Colorado, but it remains to be seen how the ‘Caps defence will fare against non-last place teams without Waston, especially considering how frail it’s been for the first few months of the season.

Brian Rowe will remain in goal due to the continued absence of Stefan Marinović, while the two fullback spots continue to be very open. Sean Franklin’s shocking performance against New England opened the door for Jake Nerwinski to start against Colorado, and the sophomore put in a solid, if unspectacular, performance. On the left flank, Marcel de Jong’s undisclosed injury seemed like it would mean a start for Brett Levis, but Carl Robinson instead elected to slide Brek Shea into the position instead. Maybe Robinson chose Shea because it was a road game, or maybe is a sign of things to come. We’ll have to see whether de Jong is fit on Saturday, and/or if the gaffer pivots back to Levis.

The midfield remains congested, and this is still before Jordon Mutch recovers from his injury. Felipe seems to be the only one assured to start in the centre of the park, and he has been partnered by all three of Efraín Juárez, Russell Teibert, and Aly Ghazal in recent weeks. The recent return to form from Yordy Reyna means it’s unlikely more than one of those three will start alongside Felipe, and it will be a difficult decision as to which one should.

Speaking of Reyna, he has been a big part of the ‘Caps offensive resurgence (the team has scored eleven goals in the last five games, after only ten in ten to start the year). The Peruvian has two goals and three assists in his last four matches, but this strong run has been somewhat overshadowed by Cristian Techera, who has five goals over the same span, and six in his last four starts. The two diminutive attackers have shouldered offensive load for the ‘Caps over the last month, and they (plus Davies) have the potential to be the most dynamic attack this team has had in what feels like a long time.

Of course, that also depends on the big men up top, Kei Kamara and Anthony Blondell. Kamara had a blistering start to the season, but injuries and some recent horrendous misses means he only has one goal since March. And while Blondell has definitely shown some flashes of quality, he still only has a single goal to his name. The Whitecaps need them to start hitting the back of the net, as they both provide a big, target-forward presence that is essential to Robinson’s plan of attack.

On the side of the visitors, Orlando City have hit a bit of a rut. After a big six-game win streak that vaulted them up the standings, the Lions have now lost four straight matches and are close to slipping out of the playoff picture again. One of the reasons for this slide has been due to key absences: Yoshimar Yotun was called up to the Peruvian World Cup squad, while team-leading scorer Dom Dwyer has been out of action since May 13th.

It’s the Orlando defence, however, that’s been the hardest hit, as Jonathan Spector, Lamine Sane, and Scott Sutter have all been hurt with various injuries, while Amro Tarek has been with the Egyptian National Team as part of their provisional squad for the World Cup. The good news for them is that both Spector and Sane are both listed as “game-time decisions” for Saturday, while Tarek has rejoined the team after he was one of the final cuts from Egypt’s squad.

One area the Whitecaps must improve if they are to make the playoffs is their home form. They have only picked up 10 points from seven home matches so far, nearly identical to their haul on the road. Three of the ‘Caps next four games are at home, and against struggling opposition (Orlando, Chicago, and Colorado).

This is a prime opportunity to regain some ground in the standings and they could do with starting things off heading into the World Cup break by grabbing all three against Orlando on Saturday.