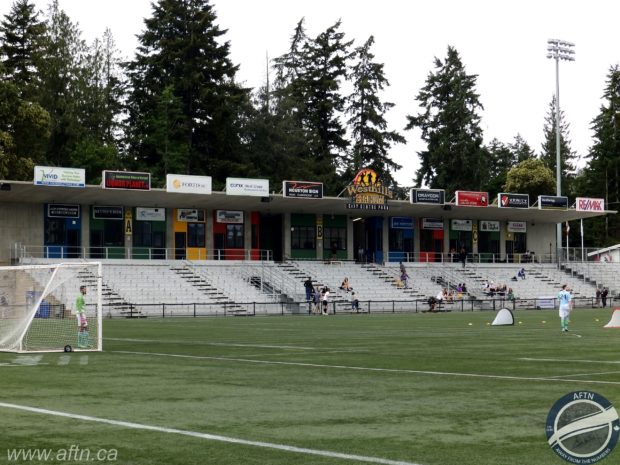 The Canadian Premier League is coming to Vancouver Island next year and Westhills Stadium in Langford will be the place they will be calling home – hydro pole pending.

So what better way to welcome the Victoria team into the league than with another Groundhopping feature here on AFTN?!

We headed over to the island in May 2016 to watch the BC Provincial Cup finals, which were being hosted by the Vancouver Island Soccer League that year at Westhills Stadium. It was a great little facility then, so we’re excited to see how it ends up looking after all of the expansion to get it up to CPL standard.

Opened in 2009, Westhills Stadium is located in the Greater Victoria municipality of Langford. Situated off Langford Parkway, and part of the City Centre Park complex, the multi-sport stadium is a 25 to 30 minute drive from downtown Victoria, and about a 40 minute drive from the Swartz Bay ferry terminal in Sidney. 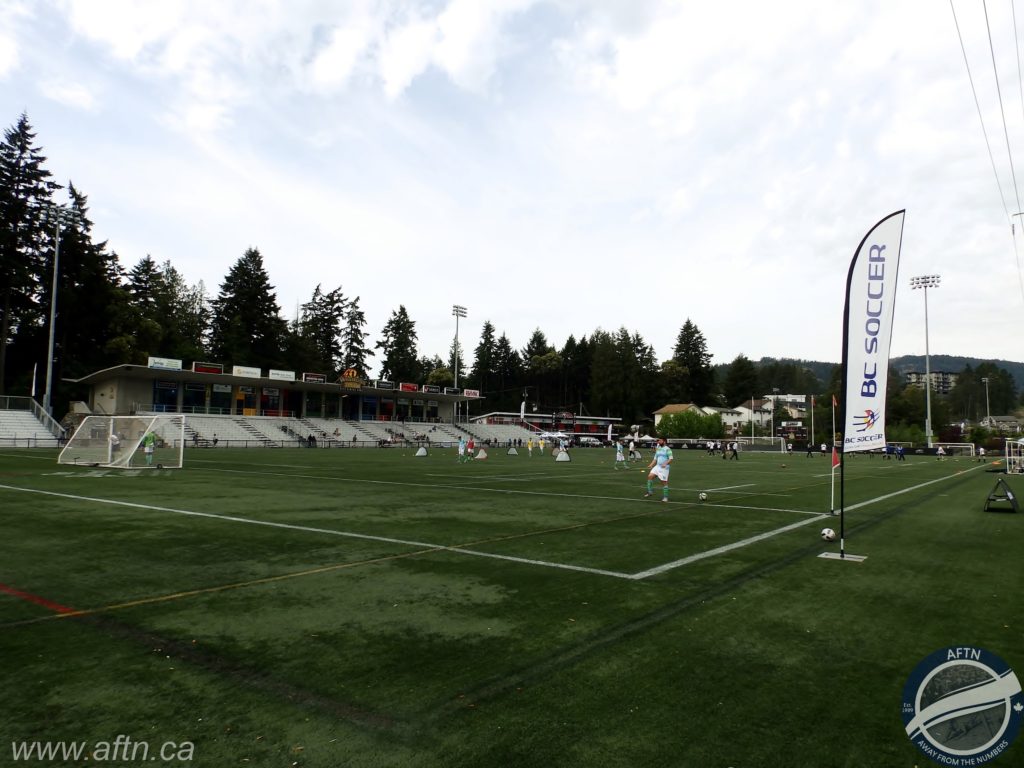 Currently home to Rugby Canada and the Westshore Rebels CJFL football team, the stadium has played host to a number of local soccer matches over the years, including Provincial finals, VISL all-star games, and Juan de Fuca Soccer Association matches.

It’s a compact ground as it stands right now, with one partly covered main stand on the south side of the stadium and a mixture of standing and temporary bleachers around the rest of it, depending on what it required for each event.

But that will all be changing with the coming of the Canadian Premier League.

The plan, as shown in the City of Langford’s artist impression below (which was drawn up at the start of this year), is to transform Westhills Stadium to an all-seater ground, raising the capacity from the current 1,718 to 8,000 and with stands on all four sides. 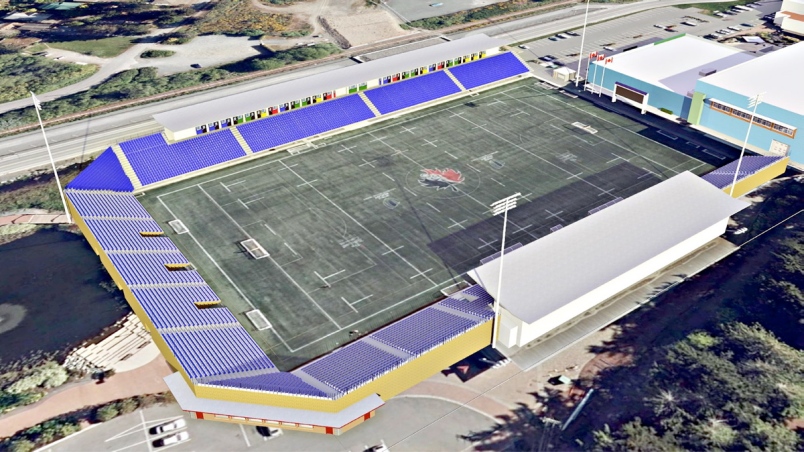 Standing in the way of that plan, and preventing the rubberstamping of Victoria’s place in the inaugural CPL campaign next season, are BC Hydro pole across from the main stand on the perimeter of the pitch (as can be seen below). The removal is estimated to cost between $3 and $4 million. No small amount, especially on top of the estimated $5 million cost of expansion.

A date of June 13th has been set for parties involved to come to an agreement to make this happen, after earning a two week’s extension to try and get the deal done. Another plan on the table appears to be to build around the access to the pole for now, which doesn’t seem an ideal solution and would surely be more costly down the road. 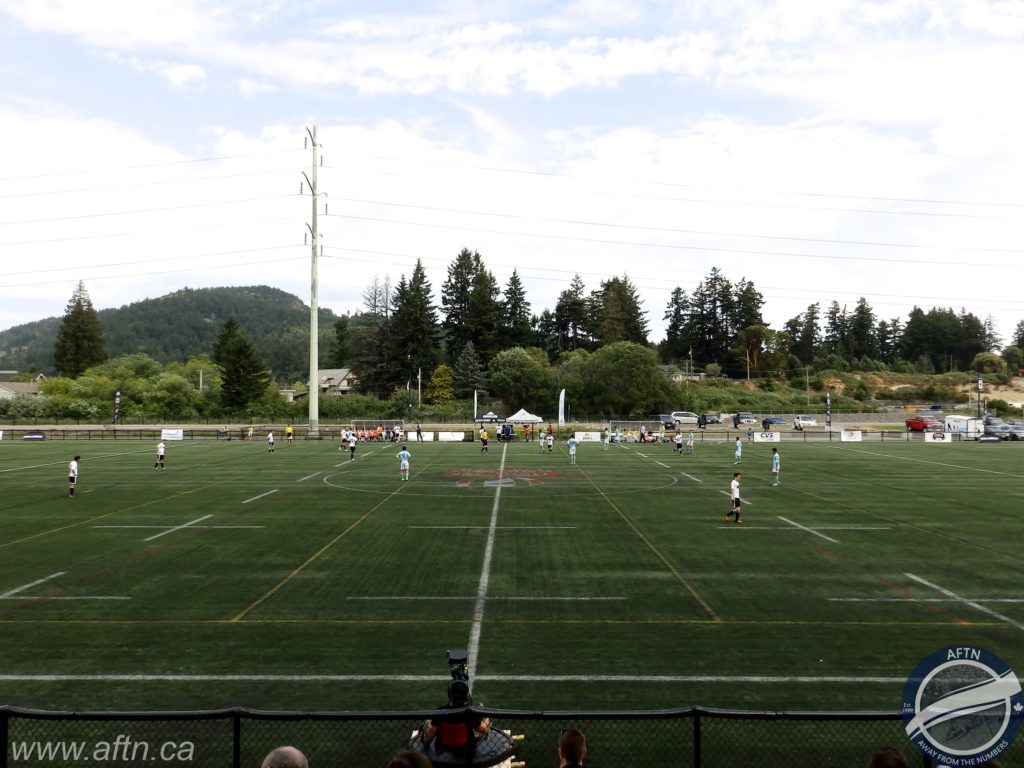 While everyone waits on tenterhooks for the green light for the new Victoria team to be ratified. Let’s take a wander around the ground and see what Westhills Stadium, which was originally known as Bear Mountain Stadium until 2012, looks like right now (well, when these photos were taken two years ago at least!).

Westhills Stadium’s main stand seats just over 1,200 fans. Comprising of 12 rows of metal bleacher-style seating, certainly not the most comfortable to sit on, as I share from experience! 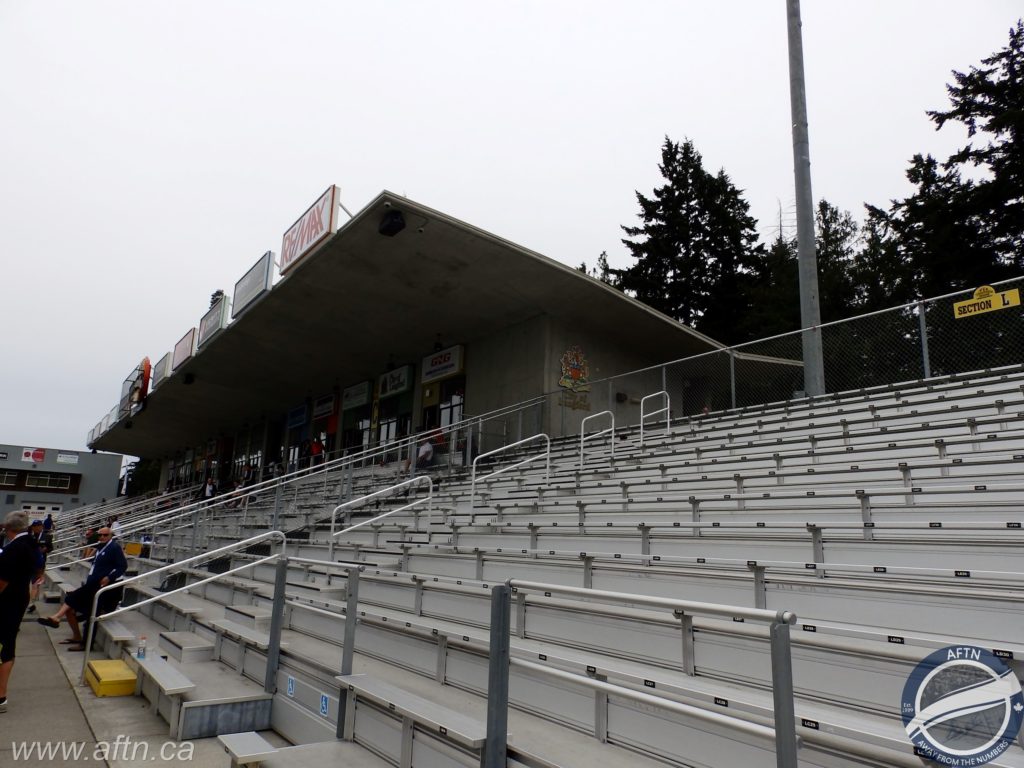 The stand is covered with a roof, but it doesn’t cover all of the seats, as it doesn’t reach the full length of width of the stand. The renovated stadium, at least from the initial artist’s impression above of the three new stands, would appear to be uncovered, which I know costs vastly less to build, but in this day and age, and especially in a rainy climate like here in BC, why you wouldn’t invest in a roof covering for your fans is very disappointing.

Will fans be keen to sit and get soaked to watch soccer? Will it matter if they already have season tickets? That’s for another day.

The current main stand houses the locker rooms underneath, with four rooms for players and one for officials, along with concessions, toilets, and storage areas.

The back of the stand hosts one press box and 10 suites for corporate use. 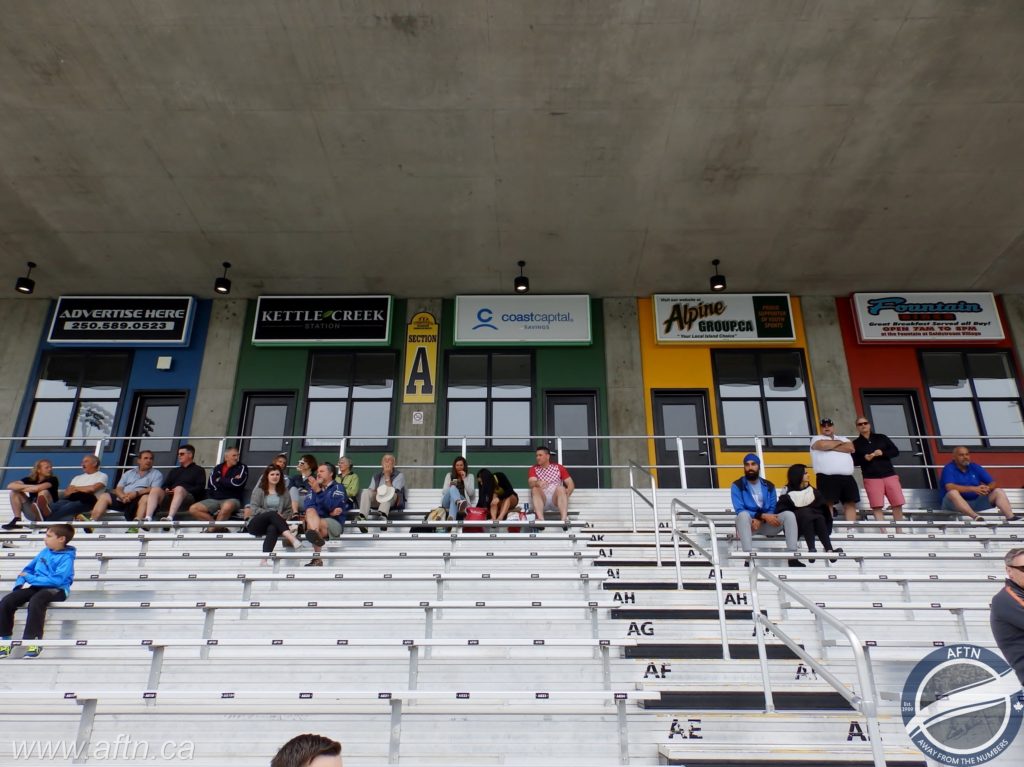 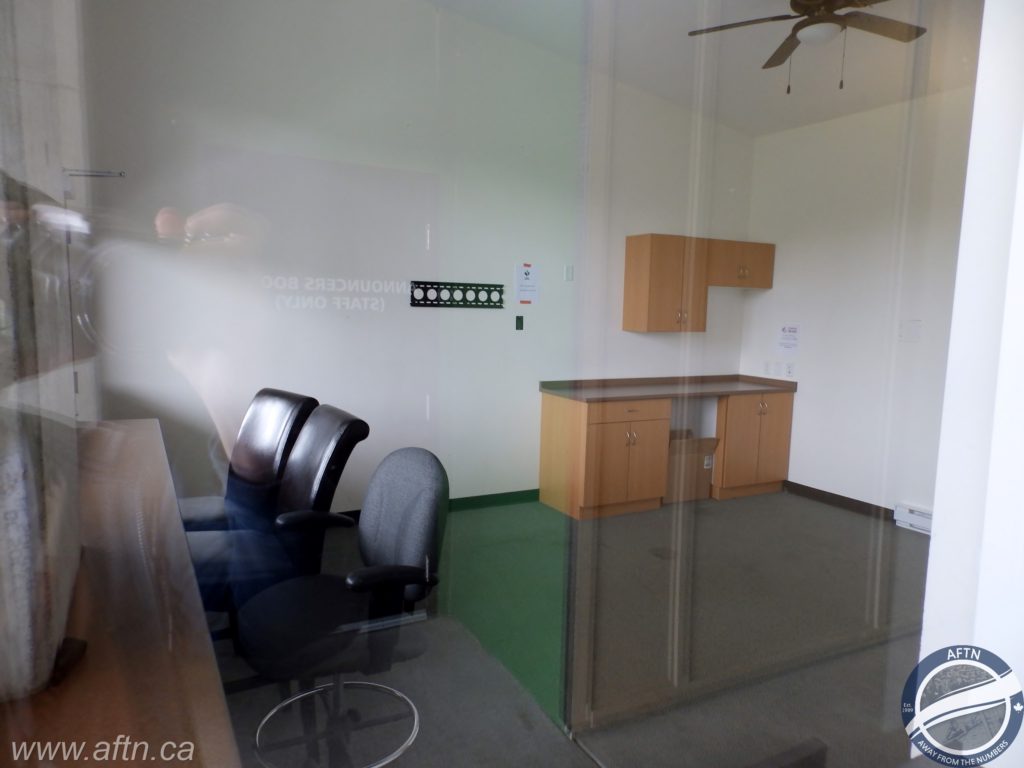 The pitch at Westhills is an all-weather artificial turf that meets FIFA 2 Star specifications, as well as the necessary specifications for rugby and gridiron, and was replace last year.

Around the perimeter, hydro pole aside, the north end of the stadium affords some nice views across Langford Lake, with the Bear Mountain Resort in the distance.

The east side of the stadium is bordered by the brick walls of both Westhills Arena and the Langford Lanes bowling alley, while the west side has one of my favourite features of the whole complex – two small lakes (ponds if you will!) and a picturesque woodland walking area.

I’m not sure how the stadium expansion may affect one of those water features in particular. Hopefully it remains or it will deprive us of some very special post-match celebrations like Campo Atletico after they won the B Cup! 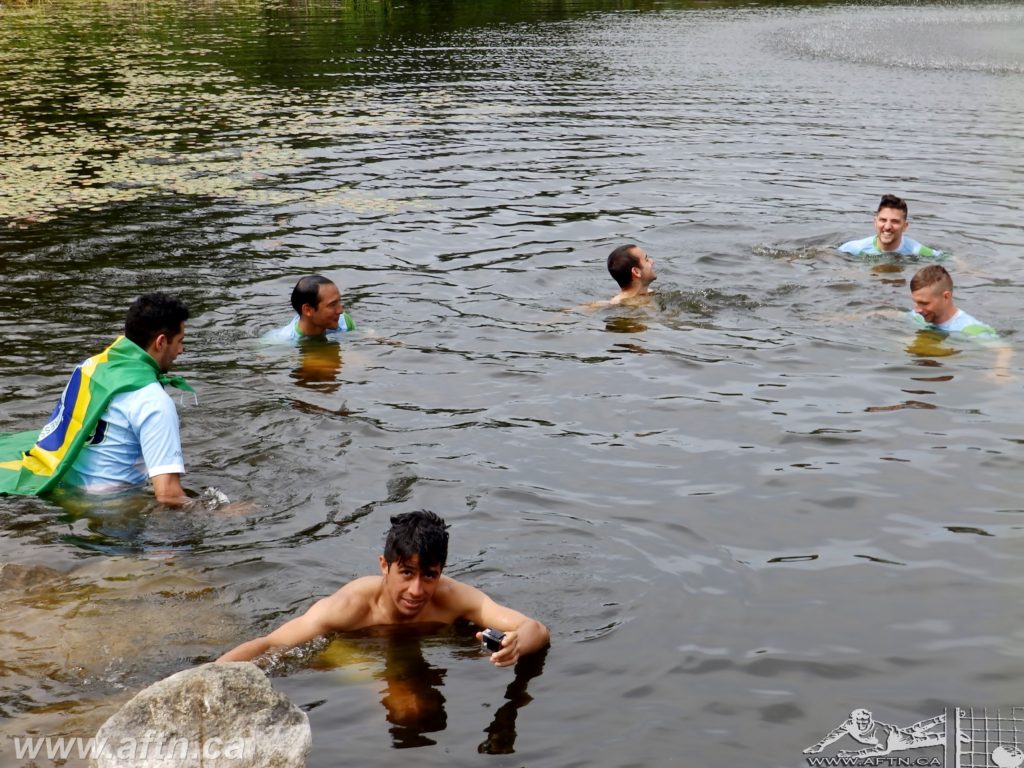 That walking area actually leads you to another part of the whole sporting complex, Goudy Field, which was opened in July 2011.

The pitch is fenced on three sides, so the only spectator viewing in on the south side of the field, primarily on the 11 rows of concrete, although there can be a little standing room down the front.

Whether that pitch will be utilized by the new CPL team is unclear, but it would certainly afford them a nice training pitch facility if they chose to use it for that and if it’s available! 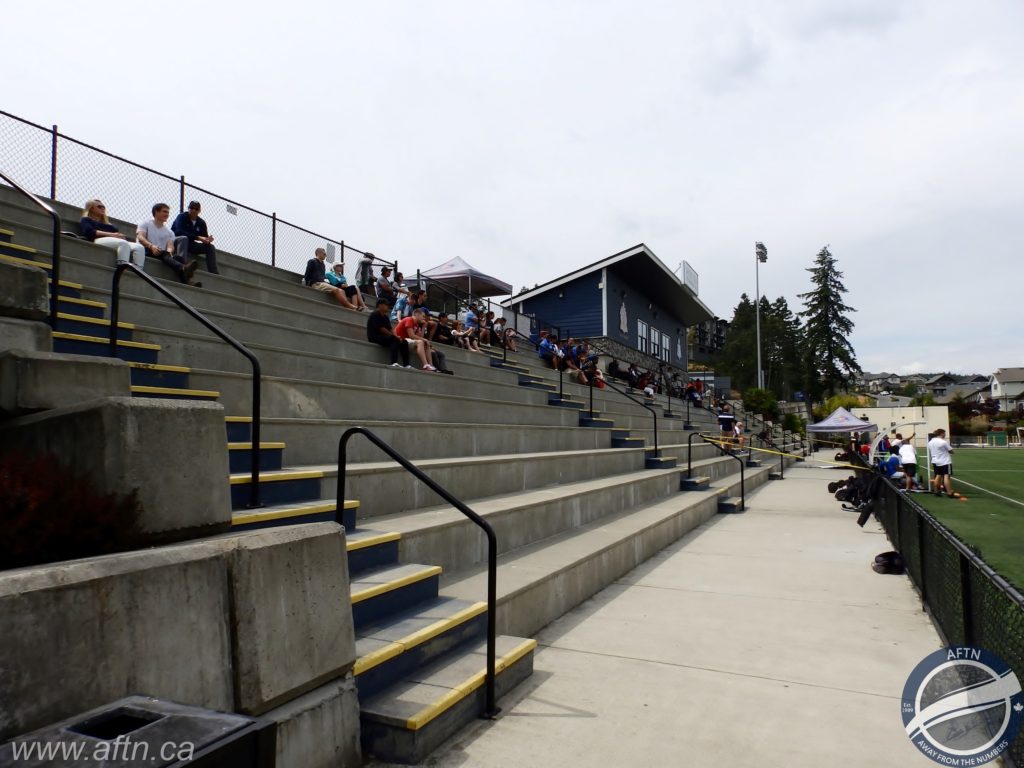 There’s car parking all around the Westhills facility, but it is somewhat limited and some of it shared with the rest of the complex. Even when we were there for the Provincials, it filled up very early. How much can be done around that will be interesting, with murmurs locally of providing shuttles from downtown to the stadium, which would be the way to go in my opinion.

It’s certainly an exciting time for soccer in Victoria and across Canada right now. I’m looking forward to seeing how Westhills Stadium transforms itself for the CPL kicking off and taking in some new stadiums across the country as well. There will be a lot more Groundhopping features to come on the site.

You can see all of our photos of Westhills Stadium and Goudy Turf on our Flickr page HERE and in our slideshow below: