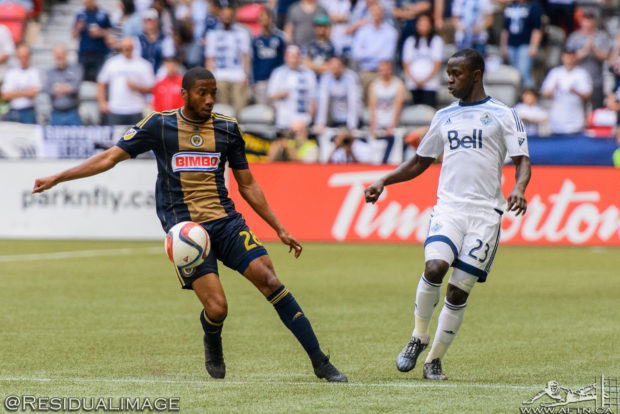 While this game is the first of the regular MLS season, it’s the third time Vancouver Whitecaps will have faced MLS opposition competitively so far this year. Does that take a little shine off a ‘season opener’? With all the CONCACAF Champions League excitement, the league season just seems to have crept up on us.

Over the two legs of the Champions League quarter-final match up with New York Red Bulls, we have seen a bit of a preview of what to expect with this version of the Whitecaps. Defend deep and hit teams quickly and directly on the counter. Will we see the Whitecaps gain more than 40% possession this year? Not in too many games.

Philadelphia Union are coming in off a somewhat positive year, and will want to jump to an elite tier in the MLS. Although they no longer have the magical playmaker of Vincent Nogueira, it is a position one of the many new acquisitions will have to step up into to make things happen in the opponent’s half for the Union.

Not only do they have questions in front of goal, but they will have to do much better defensively. You can’t rest on the laurels of a good keeper, like Blake. They do have the fact that the Whitecaps have only played 72 hours ago in their favour, but ‘Caps coach Carl Robinson has already indicated that there will be changes to his line-up for this one.

For the Whitecaps, it would appear that they are already rolling into form. This could be good if the Union are still stuck in preseason mode, especially fitness-wise.

Hello 4-2-3-1 (or sometimes morphed into 4-4-2). With the way the attackers were interchanging it was a bit hard to tell. But one thing is certain – Sit. Defend. Run. Counter. That’s the Whitecaps modus operandi.

I know some may have problems with these tactics, but when you have some electric speed wingers I don’t really see that much of a problem. It is more a question of how good can the team be on the defensive end. Will this be like last year? Or is this more a 2015 year? It’s what everyone is waiting to find out and the answer will likely determine the ‘Caps playoff hopes this season.

The real question for this game is what rotation will be occurring for the Whitecaps. The easy part is that David Ousted will likely be getting the nod yet again. Over the two legs against NYRB he proved that he still deserves that number one jersey.

As for the backline, with Kendall Waston suspended due to his shenanigans in the last game of the season against Portland, it will be interesting to see which option will be used put in. David Edgar is out till late summer, so this looks to be an opportunity for one of the younger players, giving the oft injured Christian Dean some minutes. Or will we see Andrew Jacobson slot in at the center back role. My guess is we see Jacobson in there, he could bring some experience to the backline and that would only help, but Dean got a lot of minutes preseason, possibly in preparation for this game.

Whoever Robinson goes with, it should be Tim Parker taking the start for another game alongside of them.

As for the outside backs, Jordan Harvey will continue to start and can bring that veteran presence towards the back. Jake Nerwinski has started his pro career well; I would not be surprised to see him start at that position again. Although perhaps Robbo wants to see some competition and trots out Sheanon Williams (a former Union player). I think we see Nerwinski start until he makes some big mistakes and then the next game Williams will step in.

As for the defensive midfielder positions, Russell Teibert and Matias Laba look to be ready to play. They were running all over the pitch cutting down angles against New York. Hopefully they can continue to develop some chemistry together. I would also like to see Teibert get forward a bit more, use that shot that he showed he had in the preseason.

As for what will happen up front; I liked that front four in the Champions League. They were running around and interchanging freely. That led to a number of opportunities and perhaps some confusion on the opponent’s end. That being said I doubt the same line up will see the field. Maybe that is what Robbo is doing, getting players that can play many positions and looking for a very fluid front four. That would be difficult to track.

I think that Fredy Montero will start up top. He is being paid to score! He showed what he can do on Thursday. But can he put up numbers consistently as a lone striker?

Below him hopefully we can see Nicolas Mezquida start, and show a bit more vision in the number 10 role. But he may still be unfit by game time. In that case perhaps we see Kekuta Manneh slot in underneath. The question will be how his passing game will improve while he plays there. He needs to pick up his head a bit more.

Out on the wings, if Mezquida starts, I would love to continue to see the speedsters Manneh and Alphonso Davies, especially with how Davies seems to be doing right now. I don’t think we will see Techera unless Davies is exhausted and/or Robinson doesn’t want to burn him out, or if Manneh slots in the more central role.

I do like the look of the subs for this game as well. Robbo will have many tactical tools he could deploy off the bench. Erik Hurtado will be back, Brek Shea looks like he could play forward, but can drift wide and switch with any of the wingers, and there’s the veteran presence of Mauro Rosales on the wing or in the number 10 role. A lot of options to mix things up, and a lot of squad depth, something very different for Vancouver this season. 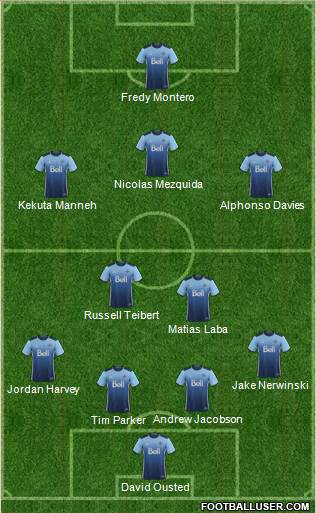 How much squad rotation will there be?

Will tiredness be a factor or will form be more important going into the match?

Is Fredy Montero match fit enough to start the game or will he be used once again as an impact sub?

Chris Pontius – He seemed washed up, but he made a comeback year last year getting 12 goals. Will he keep that train rolling?

Nick: 2-1 Vancouver. It will be a tough test of the Union, and with the ‘Caps looking roaring to start I see them taking this one.

Joe: 1-0 Whitecaps. Defence will be key.