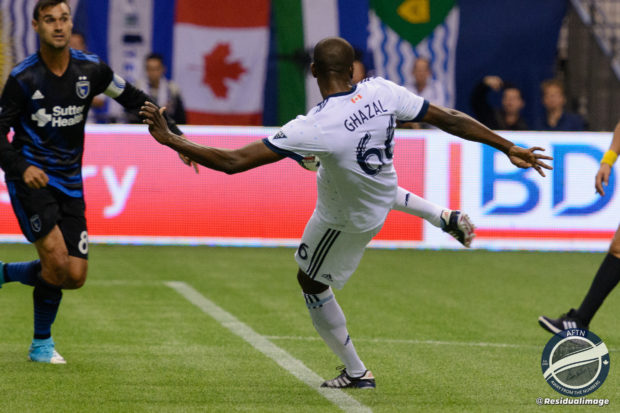 Despite plenty of action, and a grandstand finish, Vancouver Whitecaps’ match against Houston Dynamo last Friday was far from a satisfying result. Kendall Waston’s stoppage-time header saved a game that shouldn’t have needed saving, and the ‘Caps undoubtedly left two points on the table in a time when they really need to get back on track in the wins department.

The team does not have much time to dwell on that last result, however, as they play again on Wednesday. The ‘Caps will face the similarly struggling San Jose Earthquakes, in what is shaping up to be either be a temporarily pacifying victory or another bitterly disappointing result that will further fan the flames of discontent rippling through the fanbase.

The last time the Whitecaps played the Earthquakes was the swashbuckling 5-0 playoff victory last fall, though they have not beaten the Quakes in regular season play since 2015.

Probably the most surprising change to the line-up on Friday was Brian Rowe getting the start in goal. Stefan Marinović suffered a left knee sprain in training on Thursday. He’s gone for an MRI week and while the results are still unknown he is expected to miss the next few weeks, so it’s a safe bet that Rowe will make his second start of the year on Wednesday. He was pretty unremarkable against the Dynamo, but with Marinović out indefinitely, the ‘Caps will be leaning on him to hold down the fort.

Kendall Waston and José Aja have solidified themselves as the combo in the centre of the defence, but the same cannot be said for the fullbacks. Marcel de Jong made his return to the starting line-up against Houston, while Sean Franklin made his third consecutive start, but neither of them are locks to play against San Jose. Jake Nerwinski has struggled to start the season, but it’s hard to imagine he’s been fully frozen out of the starting line-up, while Brett Levis had some strong moments in the two games he started.

With two games in four days, all four are likely to see some time on the pitch, and with San Jose the more winnable match, we may see the two veterans get the start in this one, and keep the younger guys for the intense heat of Dallas at the weekend.

In the midfield, the one constant for the last month has been the presence of Aly Ghazal, who has started four consecutive matches. The Egyptian was not included in his country’s World Cup squad, which means he will likely remain a fixture in the ‘Caps starting XI for the rest of the season. Felipe has been Ghazal’s midfield partner for the last two matches, but with the fixture congestion this week it’s likely that Efraín Juárez and Russell Teibert will see action at some point in these next two games.

Up front, Carl Robinson went with the big, physical duo of Kei Kamara and Anthony Blondell on Friday, a fairly unique look for the squad. Yordy Reyna continues to be the wild card in the attack, and while the Peruvian (also not named to his nation’s World Cup squad) still has not found the back of the net this season, he has shown some flashes of his quality in the last couple games. He will surely be given a start soon, likely for either Kamara or Blondell.

On the wings, Alphonso Davies has remained the only constant. Cristian Techera has had a rocky start to the season, Bernie Ibini has been decidedly average, and Brek Shea did himself no favours with an egregious miss against Houston that should have been the go-ahead goal. It’s an open question of who should start alongside Davies, and the Whitecaps need at least one of those three players to step up their game soon.

For San Jose, last weekend was a big one for them as they finally snapped their winless skid with a 3-1 victory over Minnesota United. It was their first victory since opening day, when they won 3-2 at home over Minnesota United. The Earthquakes are 0-5-2 against non-Minnesota based teams, and they present a golden opportunity for the Whitecaps to grab three points at home.

Looking at San Jose’s injury report, starting centre-back Yeferson Quintana has been out of action since late April with an ankle injury, while midfielder Tommy Thompson missed Saturday’s match due to illness. The Earthquakes have started the season very poorly, and besides Chris Wondolowski’s record-chase (he’s only nine goals behind Landon Donovan’s all-time MLS mark of 145), there isn’t much to be excited about in San Jose.

Given that the Whitecaps only have one win in their last six matches, this is one they absolutely have to take advantage of.