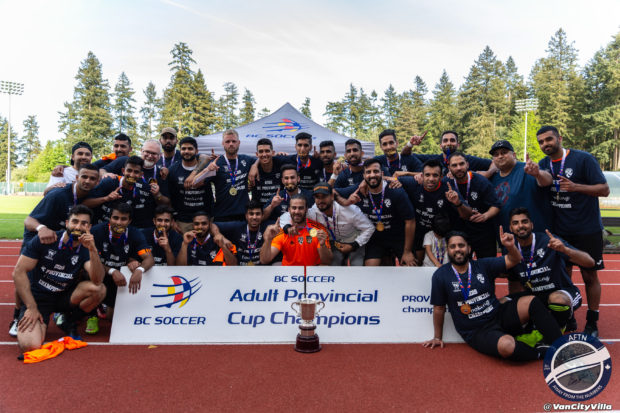 Langley United were seconds away from winning their first ever Provincial Cup at Swangard Stadium on Sunday afternoon. They had one hand and nine and a half fingers wrapped around it. It’s as close as the Fraser Valley Soccer League have come to one of their teams lifting the historic old trophy, but the soccer gods had other ideas.

With the game four minutes into stoppage time, and the FVSL side leading 2-1, BCT Rovers Tigers United were on borrowed time. Desperate to try and find a last gasp equaliser to send the game to extra time.

It was looking a forlorn prospect. But then a jink in the box from substitute Rahid Rahiem, a clumsy challenge from former Whitecaps Residency defender John Kasper, and referee Alain Ruch had no hesitation in instantly pointing to the spot. It was a big call from the referee in the dying moments of a cup final, but it was the correct, clear cut one. Rovers Tigers were now rampant, Langley United deflated, and the FVSL side capitulated in extra time, giving up three goals as the VMSL Premier Champions ran out 5-2 winners to win their first Provincial Cup under their new moniker.

A dramatic ending to what had been a dramatic afternoon of football in the baking hot Burnaby sun.

This year’s final was a much anticipated affair and it didn’t fail to live up to expectations.

Rovers Tigers United were the class of the VMSL this season, leading the Premier Division from start to finish. Rob Jandric and Soolsma had assembled a talented squad, with a fast paced and deadly attack. A team built not just for Provincial glory, but with an eye on the national scene as well.

Facing them were a Langley United side that may have fallen short in their quest for the FVSL title, but showed in their comfortable 3-1 semi-final win over defending Provincial champs Club Inter that this was a team to be reckoned with. A hard working, talented group of guys that had the hunger to go a couple of steps further than last year’s A Cup exit at the semi-final stage. And they’ll maybe never have a better chance of doing it than this year.

They couldn’t have come much closer, and Mike Wagner and Rob Keam deserve a lot of credit and praise for putting in an almost perfect gameplan in the final to play to their strengths, showing some clinical finishing and resolute defending after soaking up almost constant Rovers Tigers pressure in the second half.

Langley were the underdogs heading in to this one, but they certainly had the players capable of getting the job done and a couple of their key players were in action early.

You felt it could be a busy afternoon for their talismanic keeper Hicks, and the big stopper was called into action early, producing a point blank save from Cam Hundal eight minutes in. Nine minutes later and Hicks was called into action again, saving from Soolsma at his near post. And what an important stop that proved to be.

Langley headed up the pitch, and a seemingly innocuous long ball forward to Elie Gindo led to the opening goal. The striker did fantastic to pick up the ball and soar past the Tigers defence, cutting inside before firing low past Pratap Sandhu at his near post. It was a fantastic individual goal from the former Victoria Highlander and stunned the pro-Rovers Tigers crowd at Swangard, and Gindo was to prove a handful for the Surrey side all afternoon.

Langley’s lead was to last just six minutes, however.

Ryan Dhillon showed some great trickery to set up the equaliser. Picking the ball up near the left touchline, he waltzed past two Langley defenders, hitting the byeline before cutting it back perfectly to Soolsma, who finished with aplomb past Hicks at the near post. 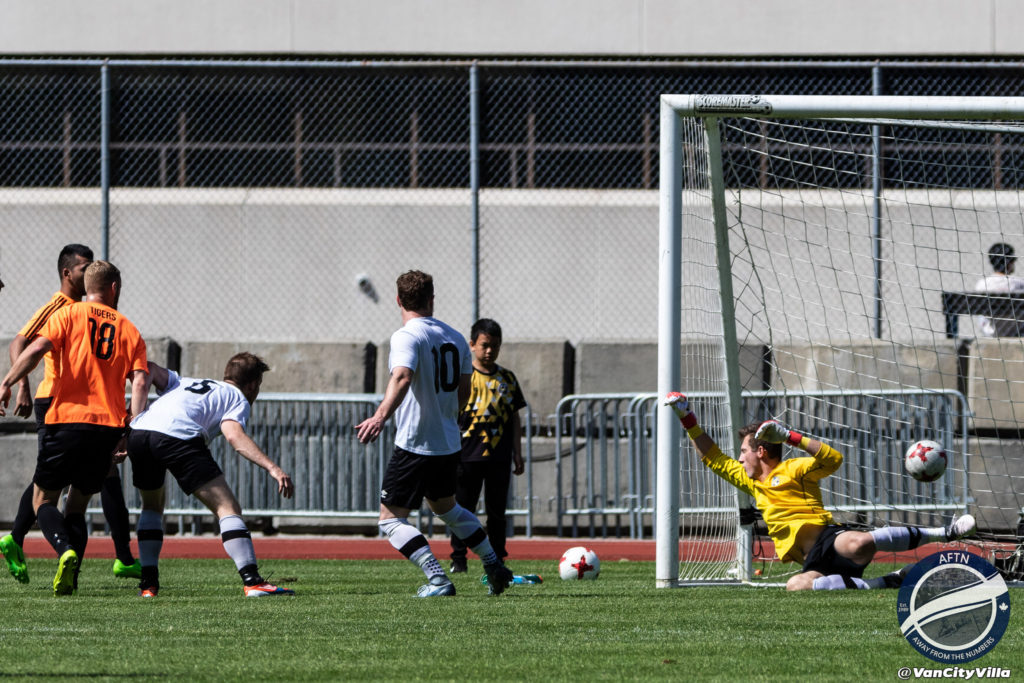 Gindo had the ball in the net again for Langley in the 27th minute but Devin Gilroy had carried the ball over the line before getting his cross in.

The action raged from end to end and Rovers Tigers turned up the pressure. Soolsma sent a ball in across goal with no takers a minute later, then Hundal was barged over in the box, but referee Ruch waved away the shouts for a penalty.

The VMSL side were looking the more dangerous team, with Langley happy to soak up the pressure and try and hit on the counter. Hicks was forced into an excellent double save in the 36th minute, saving first from Ryan Dhillon and then the follow up from Harpreet Khakh.

But Langley survived and the teams headed into half time tied up at one apiece.

Rovers Tigers turned up the heat at the start of the second half, with Hicks producing a sprawling save to deny Ryan Dhillon in the 52nd minute and then smothering the ball at his feet six minutes later when the former SFU Clan captain was in on goal. 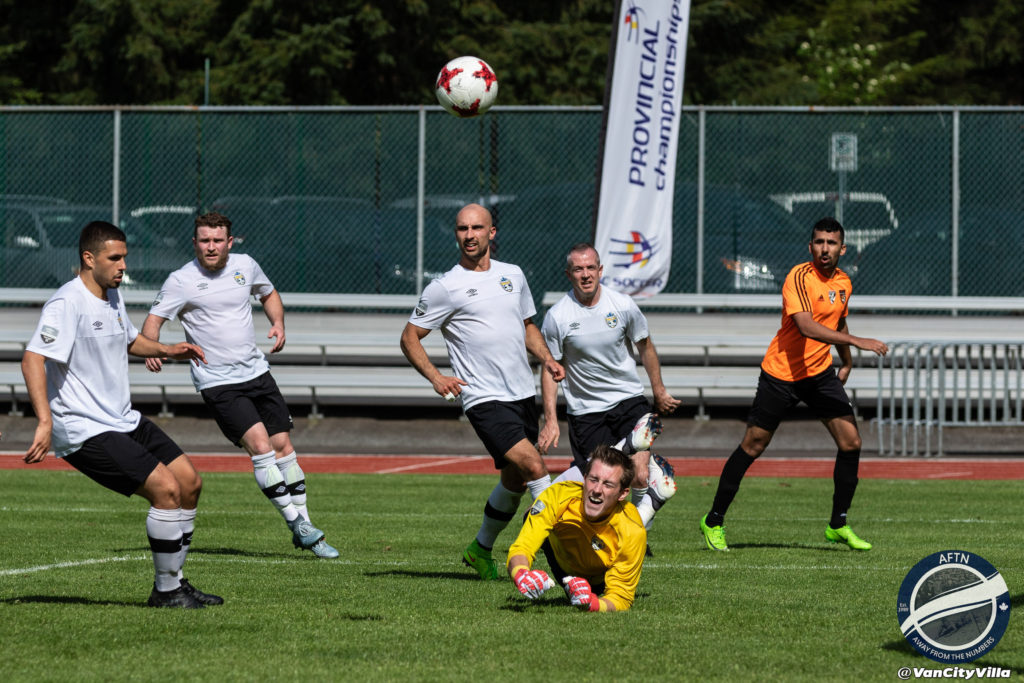 It was the VMSL side who were doing all the pressing now but Hicks was standing tall, tipping a Soolsma effort wide in the 65th minute.

After dealing with the initial onslaught, Langley started to come forward more themselves, sensing a chance to punish Rovers Tigers for not taking their chances.

Gindo shot into the side netting, before Scott Barling saw his shot deflected for a corner.

But with the minutes ticking down, Langley stunned their Surrey rivals and silenced the crowd in the 77th minute. And once again, it was Gindo who did the damage.

Barling sent a long throw into the Rovers Tigers box, which was knocked on by Langley’s semi-final hat-trick hero Brayden Gant into the path of Gindo. The big striker then showed fantastic footwork to take a touch, turn, and fire home high into the net from the tightest of angles at the near post. 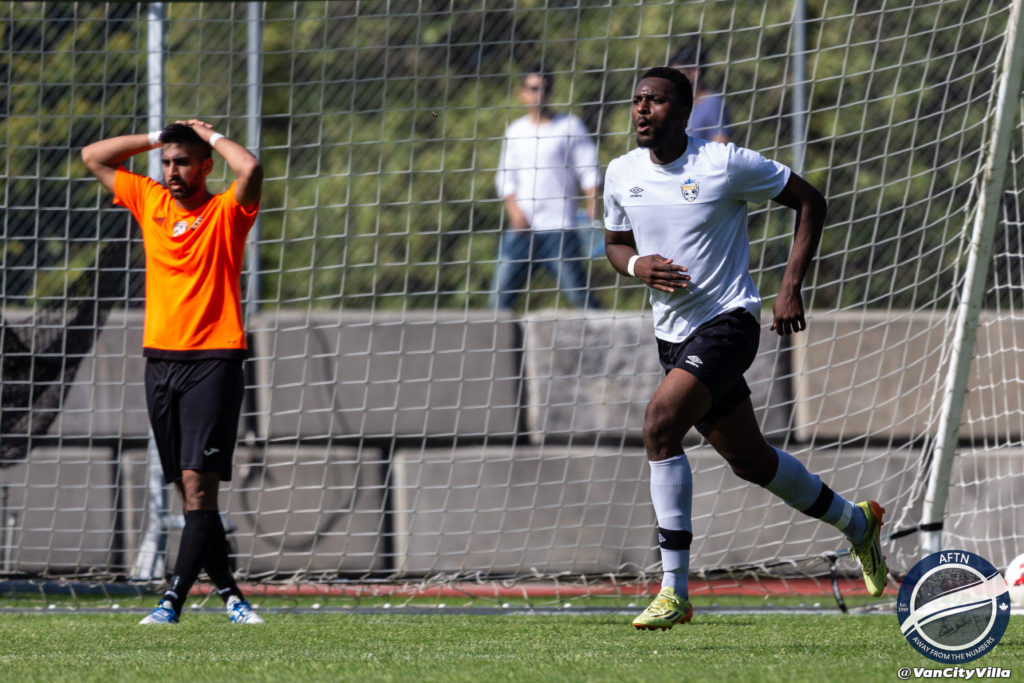 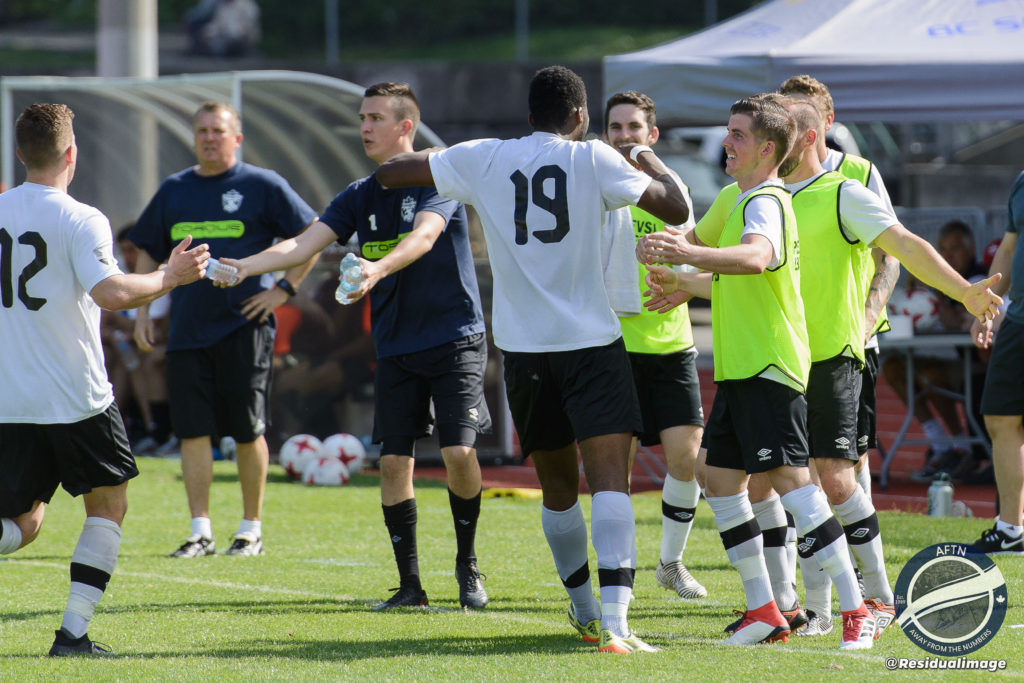 The goal sparked jubilant scenes on the Langley bench. Could this be an end to the Valley hoodoo in the competition?

Rovers Tigers were stunned, but immediately made offensive substitutions to try and find a way back into the match and keep their cup dreams alive. What followed was a siege on the Langley box by the Surrey side.

Soolsma fired a shot straight at Hicks with the goal at his mercy, then fired narrowly over moments later.

There were other close calls but Langley were bending but not breaking. Then, with the game in the final seconds of stoppage time came the penalty.

Soolsma converted and we were heading for another 30 minutes. After the entertainment and drama on display for the first 90, who knew what extra time had in store. 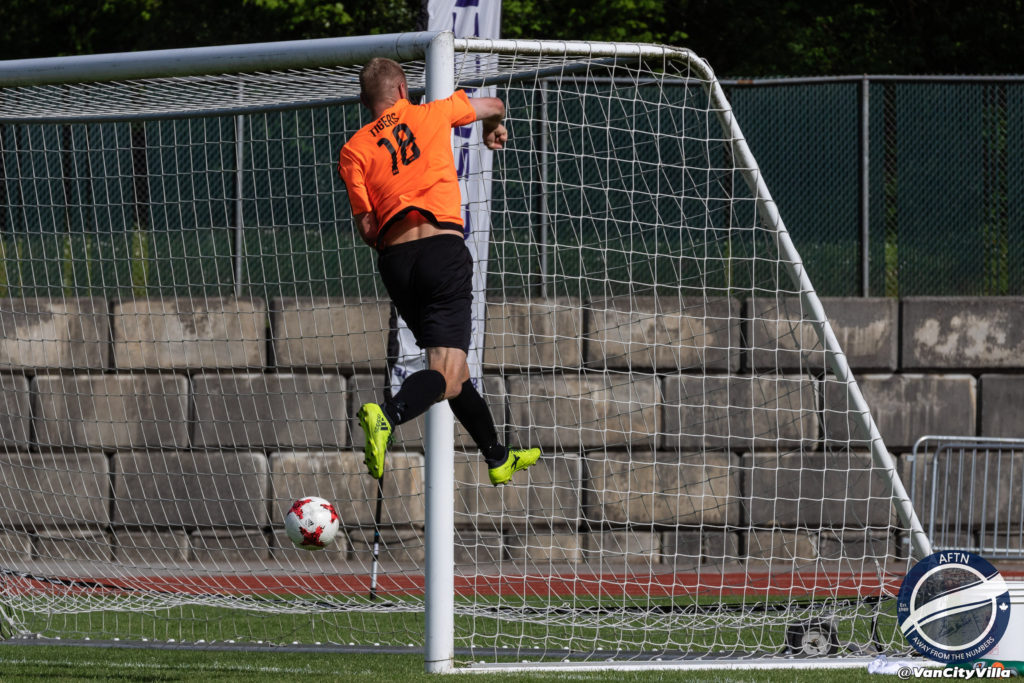 The VMSL champions went ahead for the first time in the contest ten minutes into the first half of extra time.

Rovers Tigers were having some success with a long ball over the top and through balls for their speedy forward to race onto against a tired and drained Langley defence. That reaped full dividends when Pavi Dhillon did just that, racing in on goal and tucking it away past Hicks, sparking jubilant scenes both on and off the pitch. 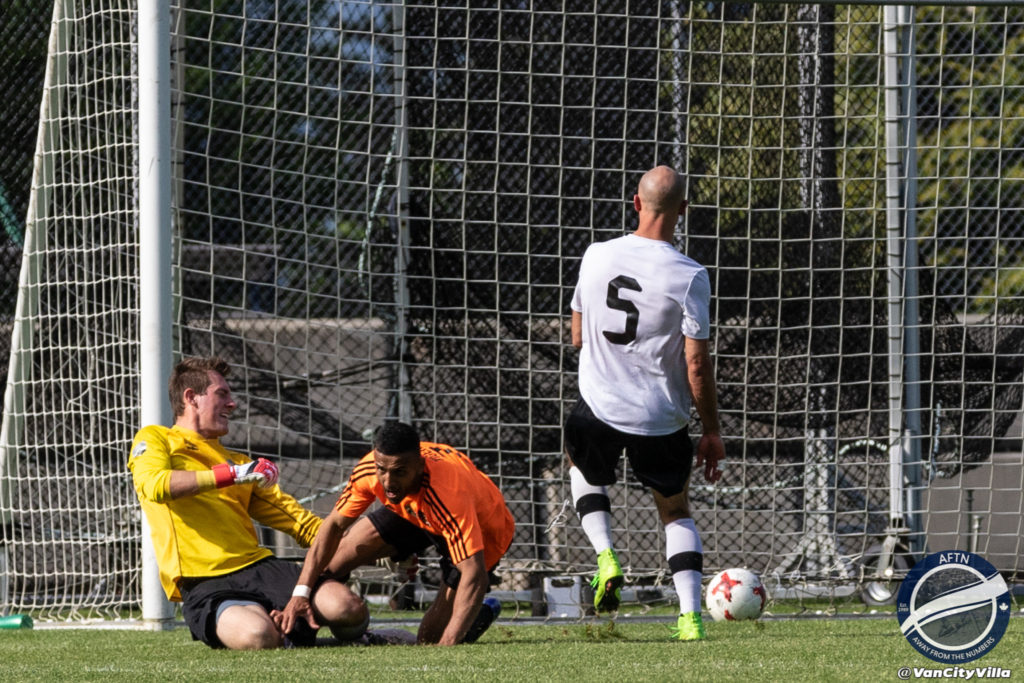 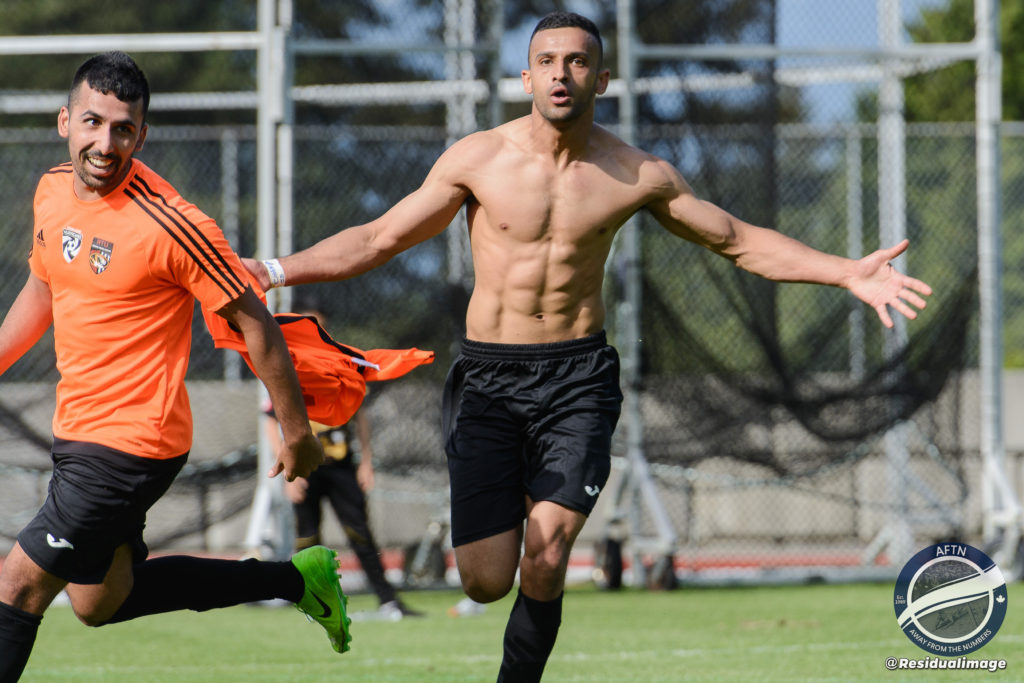 And it was to go from bad to worse for Langley a minute later when a similar play led to Hicks racing out of his goal and bringing down the Rovers Tigers striker.

There was only one possible outcome and Ruch reached for the red card.

A heartbreaking end to the afternoon for a lynchpin of the Langley program, who had been in exceptional form all afternoon.

You could see the despair and disappointment etched all over his face after the challenge and as he trooped off and there was surely no way back for Langley after that. 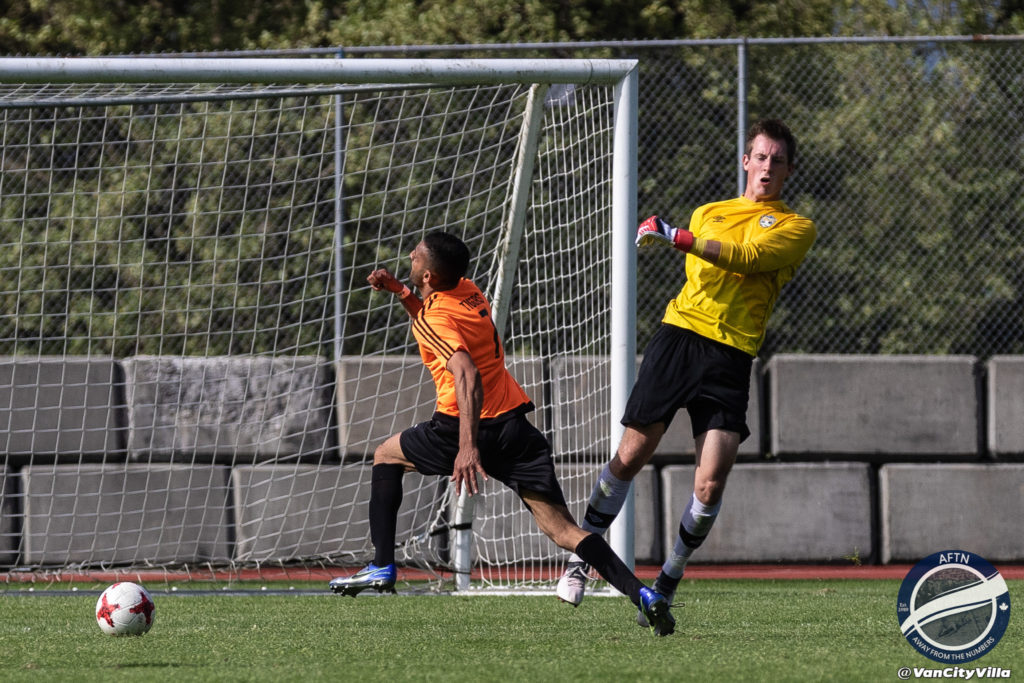 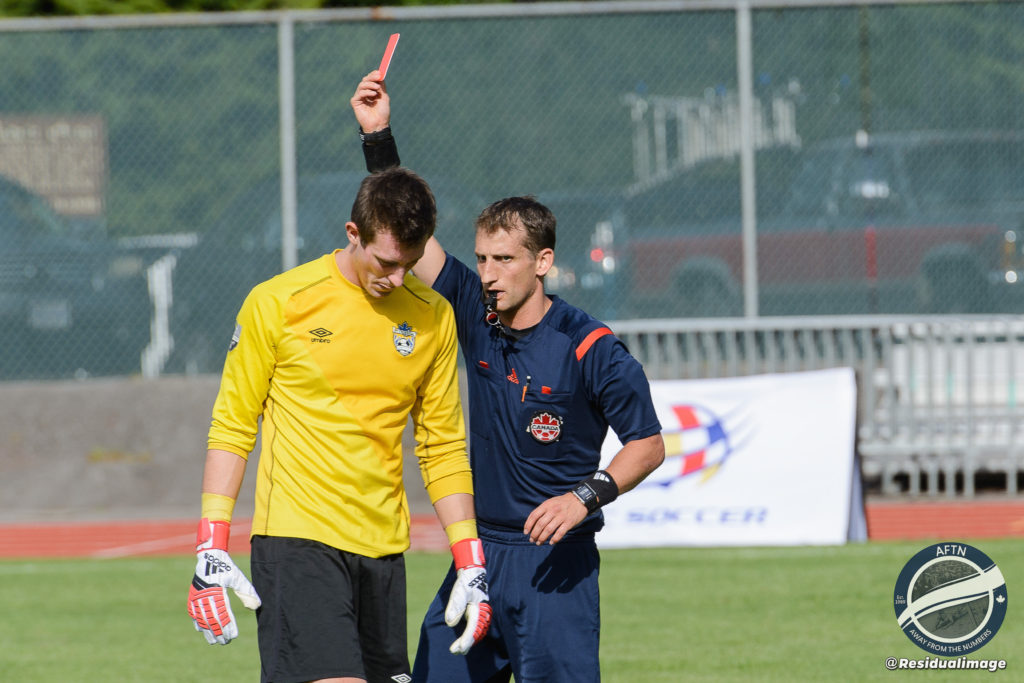 With all their subs used, Langley captain Liam McAllister went in goal and he was under a barrage of shots from Rovers Tigers thereafter.

Soolsma fired a free kick narrowly wide, before McAllister produced a leg save to thwart Rahiem from making it four with the last kick of the first half.

Langley were still in it, and when Soolsma fired wide when in on goal in the 108th minute, then Pavi Dhillon fired over, and Soolsma again had a chance to tied it up but instead shot at the keeper, you wondered if this game was going to have another dramatic twist.

Any such thoughts were then answered with seven minutes of extra time remaining when Rahiem played in Soolsma once again and the Rovers Tigers player/coach had all the time in the world to race in on goal, pick his spot, and complete his hat-trick, sparking further jubilation from the sidelines and stand. 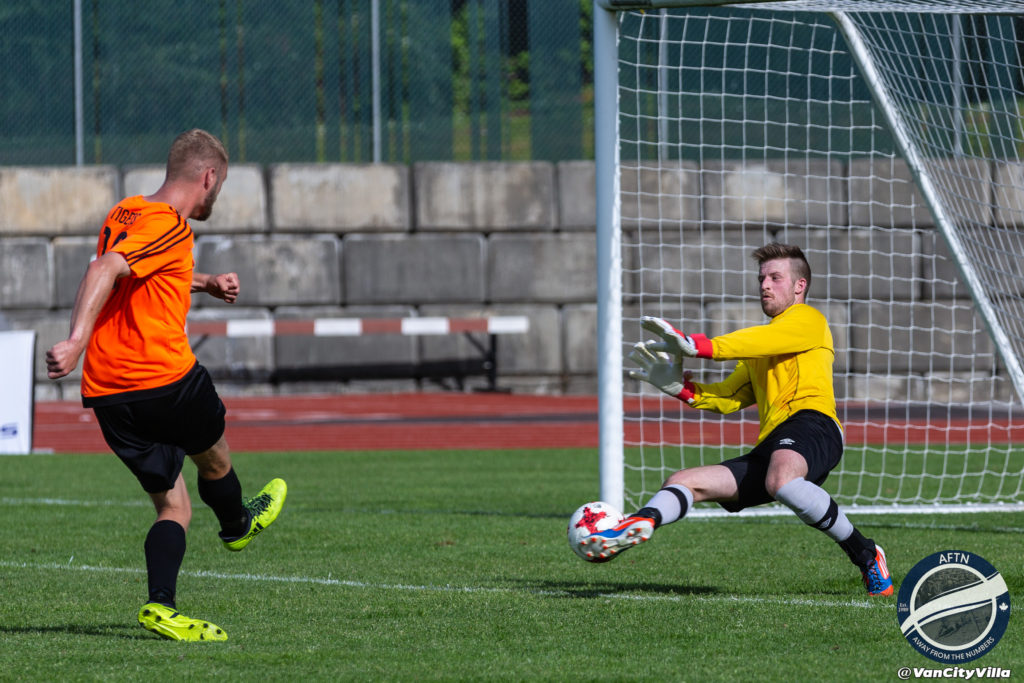 It was Soolsma’s second straight hat-trick after hitting one in the semi-final win over VISL champions Cowichan FC, and finally ended Langley’s brave resistance.

When Karn Phagura slotted home a fifth in the closing moments, it was the icing on the cake for the VMSL champions.

A 5-2 victory, a BC Provincial Cup title secured, and now a place at October’s nationals in Saskatoon awaits. 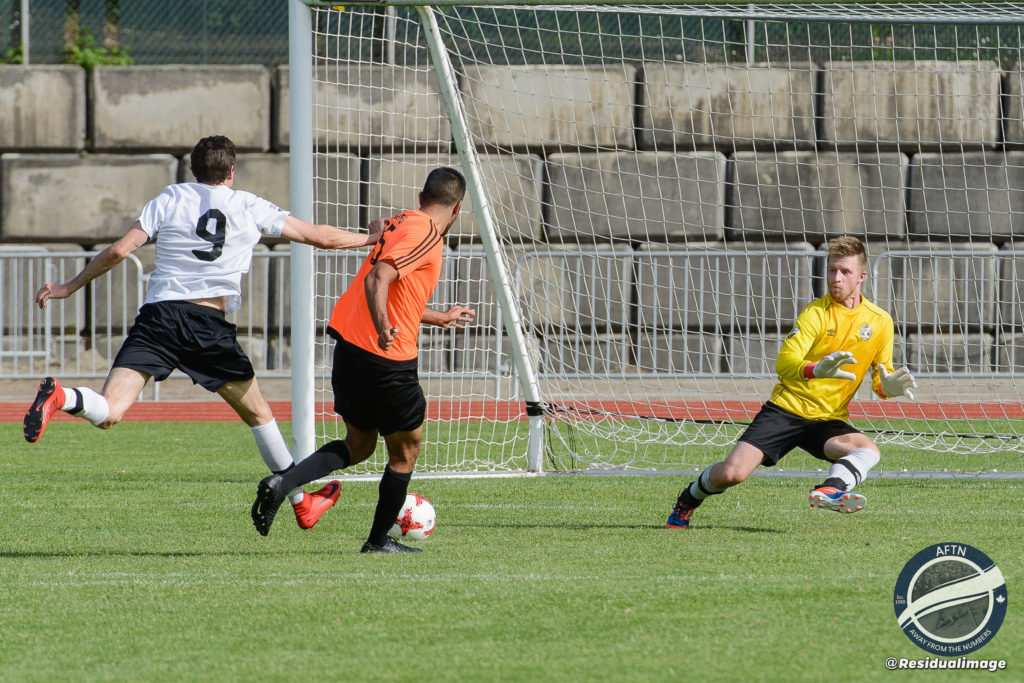 The most dramatic of wins in the end for Rovers Tigers United, and you have to feel for Langley, who came so so close to making history. They took the VMSL champions all the way, and Soolsma was both a relieved and delighted man at the final whistle, proud of the fighting spirit his team have shown in the cup run.

“It was tough,” Soolsma told us. “We played four games in the Provincials and in three games we had to come back from being down. This game was really close, but I still believed in it. You never give up.

“We took defenders out. Two of our central defenders we took out and put attackers in, and every ball we put in the box and we fight to the end. Eventually it worked out, we got the PK, and we scored the equaliser.”

And for Soolsma, winning a Provincial Cup in his first year as head coach and bagging a hat-trick in the final, it couldn’t have gone any better, although I’m sure he’d have preferred to do it in less dramatic circumstances.

“Of course, of course,” Soolsma enthused. “It’s a new experience for me being player/coach of a men’s team. This is my first season. I like to help the young players and put my experience in the team. That’s all I can do. Then on the field I can still play of course.

“The first season worked out well and I’m happy that the team won it. I think overall, with the qualities in the team, we were the best team in BC, so I think we deserved it.” 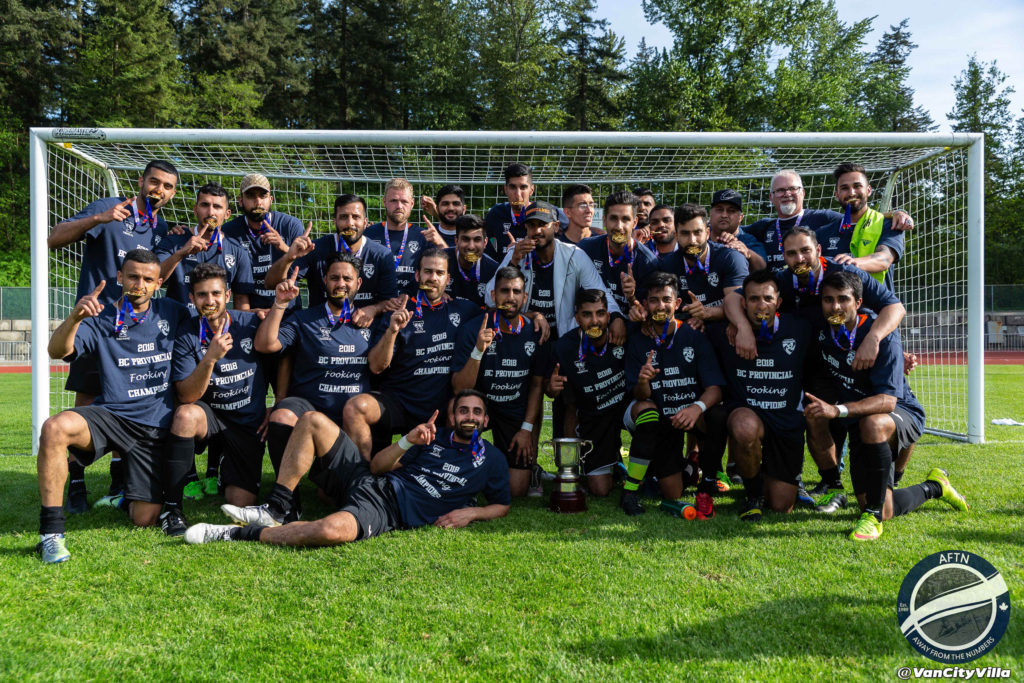 VMSL Champions, now BC Provincial Champions. Next up are the nationals in Saskatoon in the fall. Is this a team built to now go and compete at the nationals and bring the cup back to BC for the first time since 2006, when their Surrey rivals lifted the 106 year old Challenge Trophy?

“I think so, yeah,” Soolsma feels. “It’s tough of course playing against the best teams in Canada but this group, we have different qualities in the team. We have different kind of players and I think we’re a good mesh altogether. Hopefully we can keep the team together, maybe add a couple of players, and then that’s our goal, winning nationals.”

You can see six of the goals (unfortunately we weren’t filming for Langley’s opener) and some other highlights, including the trophy presentation and celebrations, in our video below.