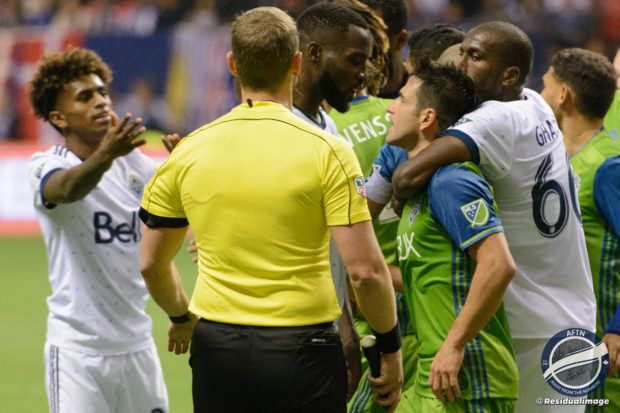 The first post-World Cup international break is over, and the Whitecaps kick right back into gear with a crucial match this weekend against Seattle. To be fair, every match these last few weeks has been crucial, but this one feels doubly so given that Seattle currently holds the sixth and final playoff spot that the ‘Caps are desperately chasing.

Though their opportunity at a rare clean sheet was foiled in extra time in the 2-1 victory over San Jose on September 1st, the Whitecaps hopefully came out of that match with some confidence. They were in control of the game for the vast majority of the night, and the result bumped them up to 4-0-2 in their last six games. Of course, Seattle is much better than San Jose, but the ‘Caps have shown some flashes of quality over the last few games, and hopefully that will translate to a complete 90-minute performance sometime soon.

Stefan Marinović will stay in goal, but the centre-back pairing is more of a question mark. Doneil Henry is healthy – and started in Canada’s 8-0 thrashing of the U.S. Virgin Islands – but it is the duo of Kendall Waston and Aaron Maund that has helped guide the ‘Caps to back-to-back wins. Similarly, at left-back, Marcel de Jong’s poor performance in the first match against San Jose gave Brett Levis an opportunity to start in the rematch, and the Saskatoon boy made the most of it: putting in a strong shift and winning the Whitecaps’ Man of the Match honours.

Personally, I would stick with the back four of Waston, Maund, Levis, and Jake Nerwinski. Any combination that’s producing results has to be stuck with this late in the year, and barring any fitness issues – still a worry for Levis – I expect Carl Robinson to give this backline the nod against the Sounders.

Speaking of combinations that are producing results, the midfield pairing of Russell Teibert and Aly Ghazal started last match and will hopefully do so again on Saturday. In the five games they’ve started together in MLS play the ‘Caps are undefeated (3-0-2), and contrary to what you might think the team has scored at a much higher rate (2.6 goals per game) in those games compared to their season average (1.67 goals per game). Add that to an improved defensive record (1.6 goals against in those five games compared to 1.93 for the season), and despite this all being a small sample size it’s enough to warrant keeping them both on the field.

This would mean a smaller role for Felipe for these last few games, though the Brazilian could start in a more advanced role against Seattle due to the suspension of Yordy Reyna. The Peruvian’s penalty for yellow card accumulation comes at a very bad time for the ‘Caps, as Reyna has really hit his stride in the last month and a half: he has two goals and six assists in his last four starts, and has been the driving force behind the ‘Caps attack during that time. His absence will heap big pressure onto whoever replaces him – likely Felipe or Nicolas Mezquida – to provide the same sort of spark against the Sounders.

The loss of Reyna also means that Alphonso Davies and Cristian Techera need to step up to shoulder the creative burden, as it will take a complete team effort to break down a Seattle defence that is as resolute as ever (only 27 goals conceded this season, best in MLS). Kei Kamara will also look to continue his recent strong run of form, with two goals and two assists in his last three starts.

Looking at the ‘Caps opponent, the Sounders seemed dead in the water until not too long ago. On June 4th – three months into the season – they were at the bottom of the Western Conference with just eight points from eleven games. It looked like this would be the year they would finally collapse entirely, but of course, as the calendar turned to summer, Seattle began find their feet again.

The next seven games saw them start to grind out points like we’re used to seeing them do, putting together a still-subpar but definitely improved 2-2-3 stretch. Then they played the Whitecaps at home on July 21st (with the ‘Caps nine points ahead in the standings at the time) and won 2-0. From there Seattle roared back to life, ripping off a record-setting eight straight wins and counting. It’s the longest winning streak the league has seen since MLS stopped using shootouts in 1999, and it’s catapulted the Sounders ahead of Vancouver and into sixth place in the West.

If the ‘Caps are to make the playoffs, that is what they’ll have to topple. Seattle have won eight straight, are unbeaten in eleven, and currently have the edge in the playoff race. If the ‘Caps win, they’ll jump back to sixth place, just one point behind both RSL and Portland. If they lose, they’ll be four points back of a playoff spot with just six games remaining, one fewer than the two teams directly above them. Let’s see what this team is made of.