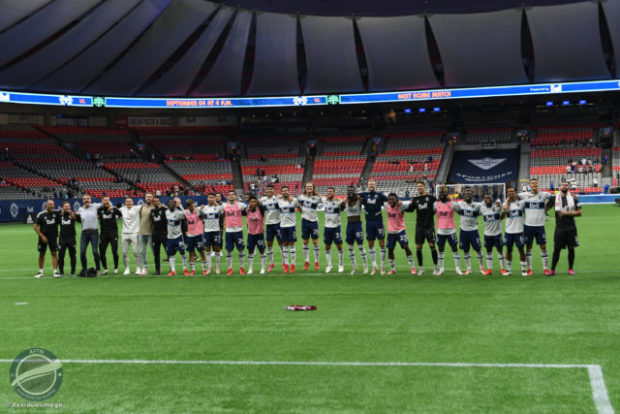 Well, you might not have guessed it based on how much of a roller-coaster of a ride the last couple weeks have been, but the Whitecaps are on their longest-ever unbeaten run in MLS play. I know, it’s crazy. It feels like that shouldn’t be the case, but the ‘Caps have not lost to an MLS opponent in nearly two entire months.

A win Saturday afternoon would not only be their fourth in a row in MLS play (their longest such streak in six years) but it would also, for at least an hour, push them over the red line into a playoff spot. Considering where they stood in the middle of the summer, it’s a wild position to be in, especially considering that they are playing the definitely beatable Austin FC.

Obviously, there’s not a team in the league that’s a pushover for the ‘Caps, who can ill-afford to feel any sort of cockiness about their credentials. But at the very least, the fact that we’re actually talking in these sorts of terms rather than already seeing this season as done and dusted is a bit of a blessing considering how the last couple of years have gone.

The reign of Vanni “Method Man” Sartini got off to a glorious start with a thumping 4-1 win over reeling Real Salt Lake, and if the ‘Caps are able to pull out another victory this weekend it might quell some of those who felt the timing of firing Marc Dos Santos was a bad one. I’m not saying it wasn’t odd timing, but it was surely coming sooner rather than later and if puts a jolt into the team then I feel it’s a good thing.

The bad news heading into this match is that the ‘Caps’ backline is suddenly ravaged by absences. Cristián Gutiérrez has still not returned from the injury that’s now kept him out for a full month, and Jake Nerwinski, Ranko Veselinović, and Andy Rose are all now hurt as well. Add on international absences for Javain Brown and Maxime Crépeau, and you’re left with a thin group.

The one positive is that Érik Godoy is back in full training, and his return could not come at a more needed time. Godoy and Florian Jungwirth (the presumptive centre-back pairing) might have their work cut out for them with Thomas Hasal serving in goal and the club down three of their top fullbacks. 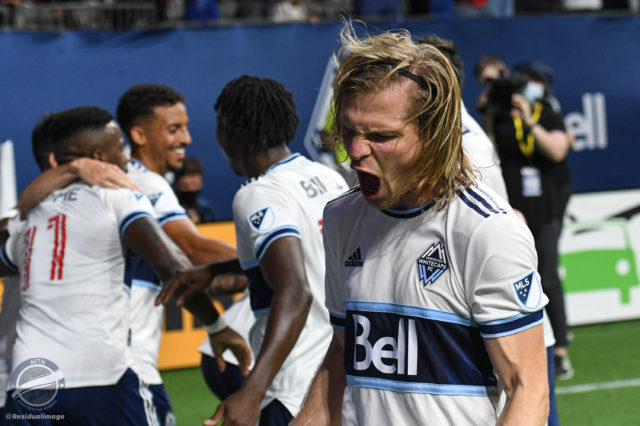 Jungwirth, to his credit, was quite the commanding figure in his first start for the ‘Caps, not only nabbing a goal but marshalling the backline admirably. Bruno Gaspar will likely start at left-back as he did against RSL, while the two options for right-back are Marcus Godinho and Janio Bikel.

Godinho made a cameo appearance last weekend and…did not look amazing on his debut. I would honestly feel much more comfortable putting Bikel there, though that would be taking him out of the midfield where he’s been a rock for the ‘Caps all year, and if Sartini keeps the same formation he used last weekend there needs to be a trio in the middle of the park.

What could facilitate Bikel dropping to right-back is the return of Michael Baldisimo, who can slot in as the number six while keeping Russell Teibert and Leo Owusu ahead of him. If I was selecting the line-up that’s what I would choose, though we could just as easily see Godinho at the back, Bikel in the midfield and one or two of the above trio left out.

The player who was left out of the line-up last week was Déiber Caicedo, who is second on the team in minutes played this season, behind only Bikel. With the shift of putting Ryan Gauld up as part of the front three in a 4-3-2-1 formation there wasn’t space for both Caicedo and Cristian Dájome, with the latter preferred over his younger Colombian counterpart.

While Caicedo has definitely shown improvement as the season has gone on, he’s not going to displace either Gauld (who has been a star these last few matches) or Dájome (who has led the ‘Caps attack for most of this season). If those two players can develop some real chemistry, then we could be in for some excitement, more than we’ve had in a ‘Caps attack for quite a while.

Up top, Brian White continues to stumble into goals and has knocked the ball into the net in three straight MLS matches while not standing out particularly in any of them. Being in the right place at the right time is a skill and he’s done that recently, and while he’s not that dynamic you can’t really complain if the attack as a whole produces. The arrival of Gauld has revitalized White’s production, a fact which bodes well for when Lucas Cavallini makes his return post-international break.

Looking at the visitors, Austin is coming off a dispiriting 5-3 loss to in-state rivals FC Dallas, where they gave up four goals in the first half (three of them in a four minute spell and at home, no less) and were down 5-1 before making the score a little more respectable. They’ve lost four of their last five matches (including one to the ‘Caps), with the exception being a 3-1 win over Portland two weeks ago.

The expansion side are 2-7-2 on the road this season and have not been good at all there recently. They haven’t won on the road in four months and have been shut out in three straight matches away from home. This form has caused them to remain in the Western Conference’s basement, tied with Houston for last place and six points back of 11th.

If all this sounds like it’s lining up for a disappointing Whitecaps loss, then you know you’re a fan of this team. It’s gotten harder to imagine that things can legitimately go well, with many chances to seemingly turn a corner dropped. We’ll see if this one goes better.