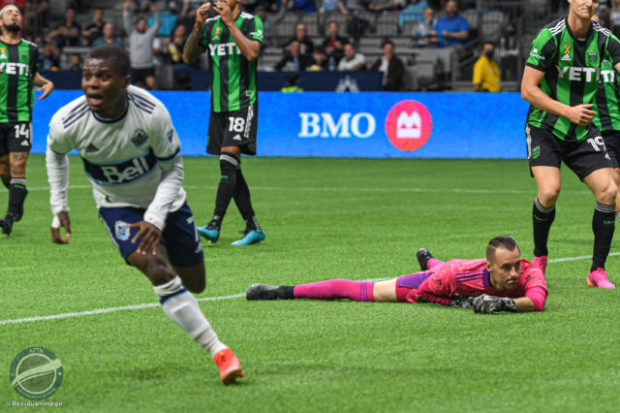 Two and a half weeks ago Vancouver went to Austin for their inaugural MLS meeting with the new Texas team. The home side was up 1-0 at the half before the Whitecaps netted twice to rally to a 2-1 victory. This afternoon’s rematch at BC Place was almost a carbon copy of that encounter.

In another tale of two halves, Sebastián Driussi headed Austin into the lead before the interval. After the break it was a revamped and inspired Vancouver side that fought back with goals from defender Érik Godoy and winger Déiber Caicedo to claim all three points. The win meant the Whitecaps extend their unbeaten run to 10 matches (5 wins and 5 draws) in league play. It also saw interim coach Vanni Sartini claim his second straight win from his opening two games in his new role.

Sartini choose to keep his Christmas tree formation (4-3-2-1), but made alterations to the players within it. He was unable to select Maxime Créapeau and Javain Brown, who are both away for World Cup Qualifying with Canada and Jamaica respectively. He also dropped Ranko Veselinović to the bench. Replacing the trio were Thomas Hasal in goal, Érik Godoy at centreback, and Michael Baldisimo slotting into midfield causing Janio Bikel to be shifted to rightback. The hope was to maintain the attacking force that saw the ‘Caps dominate Salt Lake last week in their 4-1 win. However, things didn’t play out that way, at least at first.

Both sides lacked conviction and decisive attacking moves were few and far between in the opening 45 minutes. The most significant plays for Vancouver came from their centrebacks as Godoy (24th minute) and Florian Jungwirth (42nd minute) both made massive blocks to prevent Austin from taking the lead.

Vancouver were eventually breached though. On nearly the final kick of the first half Austin took the lead on a nicely worked team goal. Tomás Pochettino’s low cross from the right side was well controlled in the box by Cecilio Dominguez, who then had time to play in a perfectly weighted ball for Driussi to head home. The header back across goal left Hasal with little chance on the play and the visitors went into the half in the ascendency.

The service. 👌
The finish. 👏#AustinFC takes the lead. pic.twitter.com/NSoQZHoqpE

If there is one thing that has marked the Whitecaps 2021 campaign it is there ability to turn things around in the second half and that is exactly what happened. Following some frank discussions as a team, Sartini made one sub and one tactical switch at the half. Bruno Gaspar, who had one of his poorest outings as a ‘Cap, was pulled off at halftime in place of winger Caicedo. This saw the home side move to a 3-4-3 formation with Baldisimo dropping into the centre of the back three, slightly higher than Jungwirth and Godoy. Sartini also had his wide midfielders play as wingbacks.

These changes began to turn the tide in Vancouver’s favour and saw the home team create more and more chances. In the first fifteen minutes of the half there was a Godoy blocked bicycle kick, Ryan Gauld’s cross-come-shot tipped on to the bar by Austin’s ‘Keeper Brad Stuver, and Jungwirth headed over from a corner as Gauld persisted with whipped in balls to the near post.

Vancouver had two chances to equalize just after the hour mark when Brian White got on the end of a short back pass by Austin defender Julio Cascante, but Stuver came out to stymie the Vancouver striker and also turn aside the shot off the rebound from Gauld. It felt like Austin were riding their luck and wouldn’t be able to keep the home side at bay for the full 90.

The dam broke in the 70th minute when Godoy took the opportunity to venture and stay forward. As the ‘Caps worked the ball down the leftwing, now occupied by Cristian Dájome, the Colombian put in his best left footed cross of the night and found the head of the Argentinian defender to see Vancouver pull level and bring joy to the BC Place home crowd.

The game felt like it had more goals in it and Vancouver almost took the lead when substitute Ranko Veselinović played a precise long ball over the top that Caicedo got on the end of. He lobbed the keeper only to see his chance cleared off the line by the Austin defence.

Caicedo and the the Whitecaps didn’t have to wait long though to take the lead.

In the 83rd minute a Dájome throw in found White in space on the left wing. His cross found Gauld at the near post, but his strike was only parried by Stuver and right into the path of Caicedo who tapped home with ease.

The match winning goal momentarily meant Vancouver leapt into a playoff position in the MLS Western Conference, but more importantly for right now the team is playing with confidence and a sense that there is nothing that they can’t overcome.

The next challenge sees the Portland Timbers return to BC for a match that has huge implications in both league standings and this year’s Cascadia Cup. The ‘Caps will be looking to keep their unbeaten streak going and claim crucial points towards their ultimate goal of making the playoffs. 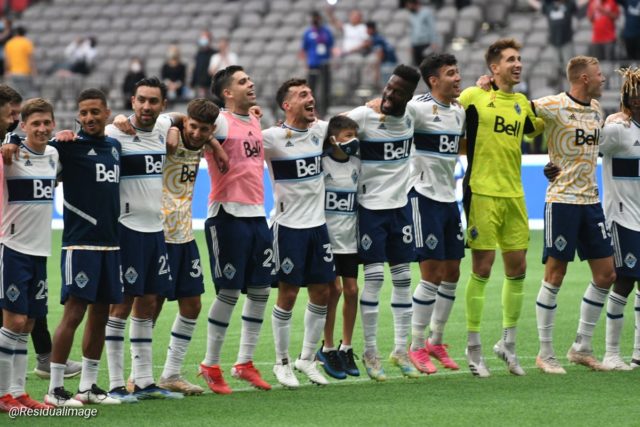 “The first half they outplayed us and in the second half we did it to them. We made a couple of adjustment tactically because our press in the first half wasn’t good. So that’s the reason why that we couldn’t win the ball and they had possession for a lot and they are a team that they want to have the ball a lot, they want to exploit these gaps when the other team is not very well organized. We made those adjustments and the guys in the second half were flying and I think we deserve to win at the end. We had much more chances than them in total.”

On the various line-up and tactical adjustments during the game:

“When it’s necessary to do it, we need to do it. We weren’t playing the way we wanted to play in the first half, so we needed to keep it easier for the players.”

On moving Dajome to right back to start the second half:

“It was actually right wingback. The idea was to go to kind of a back three with Erik [Godoy], Michael Baldisimo, and Florian[Jungwirth] on the left, with Michael starting like five metres higher and Cristian [Dajome] and Janio [Bikel] in the beginning as a wingback. Cristian played basically the second half as a wingback the entire half… it was like the first 15 minutes on the right and the last 30 minutes on the left. Of course, it’s an emergency situation because Cristian is such a gifted player up front that we like him – he is our top goal scorer – so we like him to be close to the goal. But he has also a big heart, and so we can make this role to be up or down on the side.”

“We didn’t play well, we didn’t create a lot of chances, played a little slower, a little sloppy from the back. I think the pressing, we tried but I think we were always a little far away so they could play out from the back. I think we were all pretty upset at halftime because we expected more from ourselves. Same energy like against RSL last week. So we talked, we were critical to each other, and we knew we got to do better and fortunately we came out flying and turned the game around in great style.”

What was said at half time as they looked like a different team in the second half?:

“It was like, what the fuck are you doing [laughs], no I’m just kidding. A lot of time you see that from teams when you’re playing two different halves, and sometimes you have a bad game all the way through. Fortunately today we turned it around. In my opinion it shows the character from the team because we are hungry. We know we have a really good chance to make the playoffs and today, we knew it was a chance to go above the line. We were very self critical at half time and we wanted to do better, at least for the aggressiveness and the compactness, and we did. We forced them for mistakes and we scored a beautiful goal by Erik then we still pushed them and forced them. Ryan had the shot, then bad save by the goalie, but these are the kind of errors you have to provoke, and in the end it’s another great result and another great day.”

“Yeah the strikers could do more, no I’m just kidding [laughs]. It’s one of our strengths, set pieces. We work a lot on that during the week. Last week I had a goal, I had a chance today, Erik had a torpedo header, and we know we can always rely on that. It doesn’t matter if the defender takes the header or the offensive guy, that’s really a nice skillset we have and we’ll stick and rely on that.”

On coming back from 1-0 down once again:

“I mean, I wouldn’t mind if we went 3-0, but it is what it is. A couple of weeks ago were exactly the same situation down halftime 1-0 and we turned it around there. And today, it was the same. Like I mentioned it shows the character of the team. We don’t mind, we can be 1-0, 2-0 down sometimes but we keep going. We have our mindset and our positive attitude and we will get rewarded.”

“Yes, it was a tough game. We needed these three points to be close in the playoff spots. We were patient with the ball in every attack, and we made it.”

On what changed from the first half to the second half:

“I think because we press a lot more higher and we kept a good mentality when we had the ball. We attacked too many times, we had like I don’t know 10 occasions to score. I’m happy for this result and to be part of history of this club.”

On his goal tonight (through interpreter):

On playing in front of home fans for the first time:

“It’s something I’ve dreamed of for a really long time and it was amazing playing in front of our own fans, it was amazing to feel support from them and I think that was one of the big factors that allowed us to push on in the second half. I think the first half, we moved the ball a bit too slow, it wasn’t the tempo we wanted to play at, and we came into halftime, we knew we had to make changes, the changes we made it worked, and we pushed the pace of the game, we were in their face the entire half and the boys played great. They gave us a chance to win the game.”

On his second half save in the box:

“All that I remember is the ball going out wide. I was checking my shoulders, seeing who we had to cover, standing in the position I have to be in. Ball comes in the box, we were able to put pressure on the ball, and then it came in, I was able to make the save and thankfully it was an important save because then the guys were able to get two goals.”