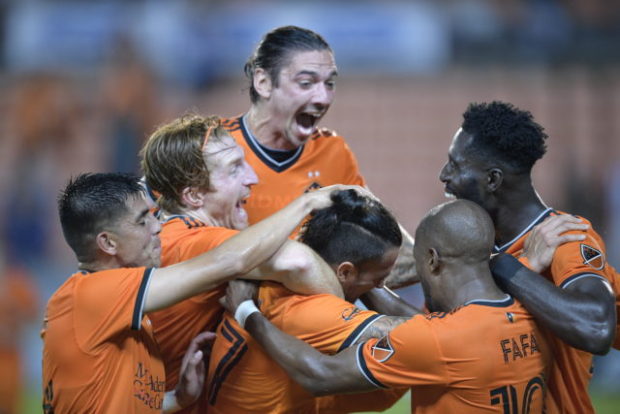 Well, our long national nightmare finally ended. After what felt like an eternity, the Whitecaps went out against the Galaxy and got a real, proper win! It might not have been by a comfortable margin, and it might have been on the heels of a dreadful first half, but beggars can’t be choosers.

Saturday’s match saw the return of Ranko Veselinović to the starting line-up after going a long while without a start, and he acquitted himself fairly well alongside Érik Godoy. That pairing was what held down the fort for the ‘Caps at the end of last season, and especially now with Derek Cornelius gone, it’s one that could very well start a large number of games together for the rest of this year.

Speaking of the backline, the most surprising emergence this season has been that of Javain Brown. With long-time stalwart Jake Nerwinski in the fold and Bruno Gaspar coming in as a more-heralded addition, it’s the rookie who started the season as the third choice right-back that has for the time being taken over the position.

Some of that has been due to injuries to his counterparts, but Nerwinski has been in the squad for four of the last five matches and didn’t start any of them. The position seems to be Brown’s to lose as things stand, which I don’t think many suspected would happen when he was drafted 23rd overall not too long ago.

With that said, there’s no guarantees that he (or most others for that matter) will start against the Dynamo, as this home clash with Houston on Tuesday is the second stop in a stretch of five matches in just 15 days. Some amount of rotation is inevitable, the question is how much and when exactly it starts.

Given that the ‘Caps just pulled out a win finally, the temptation to roll with more or less the same group must be strong. One change to the starting XI that makes the most sense is one that was a substitution in the last match, and that’s bringing in Caio Alexandre for Michael Baldisimo.

Baldisimo did not cover himself in glory against the Galaxy, with one particularly flagrant unforced error leading to a real dangerous fast break for the California outfit. Alexandre playing also drops Janio Bikel back into the holding mid role, rather than having him push more up the field as he did for most of Saturday.

For most of the others, they’ll likely only be replaced for reasons of rest and not performance. That Galaxy match was the most Brian White has been able to create as a ‘Cap, and both Cristian Dájome and Déiber Caicedo scoring was a great sight to see. It was interesting but not surprising that Tosaint Ricketts was ahead of Theo Bair in the sub patterns, and if one of the front three is to be rotated it would surely be either Ricketts or Ryan Raposo who slot in.

In the midfield, another forgotten man for a lot of this season has been Leo Owusu, who appears to have fully fallen out of favour. He has played less than 90 minutes all season, and that’s while not having to compete with players who are setting the world on fire. Given how prominent he was in the second half of last season it’s a bit surprising, and if there’s ever going to be the time for him to get a first start in 2021 it’ll be sometime in this stretch.

Will that come against Houston? Well, with the following match being on the road against the big bogey-team LAFC, there’s an interesting debate over which match would be better to rest some of the “A-team” against. Do you throw all you have against Houston to gun for the win there before throwing out a rotated side in LA? Or do you save the bigger guns for the more high-profile opposition?

In the past, we’ve seen the former from the ‘Caps. And Houston does present a real opportunity to win points, as they sit just three points ahead of the ‘Caps in the standings. The Dynamo have not played in nearly two weeks, coming off a 2-0 loss to league-leaders Seattle. They are currently on a six-match winless run reminiscent of the ‘Caps, though that does include four draws and just two losses.

With early season revelation Tyler Pasher off with the Canadian National Team at the Gold Cup, Houston’s attack is a little bit dented. Former Whitecap Tim Parker now patrols the backline for the Texan team, with other MLS vets like Maximiliano Urruti, Zarek Valentin, and Fafa Picault helping anchor the squad.

These two sides met just a couple months ago, which ironically was the Dynamo’s last victory. They beat the ‘Caps 2-1 at home that night, despite Caicedo scoring his first MLS goal. The all-time series between these two clubs is very even, though lopsided in terms of home field advantage: the home team is 14-1-3 in their meetings, and the ‘Caps have never lost to Houston at home.

Of course, “home” is currently subjective for them, but technically the Whitecaps are playing at home Tuesday night. Hopefully they won’t have to call Rio Tinto home for much longer, and hopefully when they do return to BC Place it’ll be with a bit more confidence under their belt. That, at least, they have some real control over.