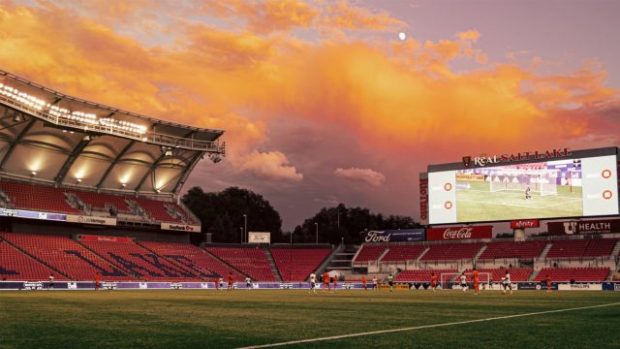 One loss in five or one win in 10? How you look at the Whitecaps current form will likely say some things about your outlook on life. However you view it, dropping two points at home to a rusty and short handed Houston Dynamo side on Tuesday night felt like a wasted opportunity for the ‘Caps.

There were no goals at Rio Tinto Stadium but both sides hit the woodwork from almost identical free kicks, in a relatively dull game that saw Houston produce the only shot on target for the entire match in a 0-0 draw.

With five games in a brutal 15 day period, squad management is going to be critical to the Whitecaps’ success, and Marc Dos Santos made two defensive changes for this one, with Jake Nerwinski getting his first start at right back since May, and Andy Rose coming back into the centre back role for the rested Erik Godoy.

Houston had five players away on Gold Cup duty, so this was a great opportunity for Vancouver to build on Saturday’s win over LA and get some momentum finally on their side. The Dynamo were still looking for their first win on the road this season and were coming in on the back of a six game winless streak. For the Whitecaps, a win would put them level on points with their visitors and just one point back of the playoff places.

Perhaps with the importance of this game in their minds, it was a much faster paced start than we’ve seen from the ‘Caps in recent matches. They were on the front foot and created a number of half chances in the early going, with the final ball letting them down on a couple of occasions.

Cristian Dajome had the best of those chances for Vancouver, blasting over from just inside the box when the ball came to him wide open from a corner in the 20th minute.

Houston responded with their best opportunity of the game so far when Maxi Urruti crashed a curling free kick off the right post.

But then the action dipped considerably and it was a bit of a snoozefest to see out the rest of the half, with neither team managing to get a shot on target.

The Whitecaps again came out aggressively to start the second half, with Dajome whipping a dangerous ball in across goal seconds in, but with no takers.

The ‘Caps came their closest yet to breaking the deadlock three minutes before the hour mark when it was Cristian Gutierrez’s turn to crash a free kick off the same right post that Urruti had hit.

There was little goalmouth action from either side for the rest of the match, although the Whitecaps will be left rueing another Gutierrez free kick, this time a delicately lofted ball to the back post that three ‘Caps failed to connect with.

So a point wasn’t the worst result in the world. It could have been more and with the horrendous schedule and opposition coming up, these are the games that the Whitecaps really need to be chalking up all three points in. LAFC away are next up on Saturday. They’ll need the same defensive effort to even be in with a shout in that one, and even then, that might not be good enough if they can’t convert their scoring chances.

“Tonight we played a very disciplined game overall, but we were not able to unlock the opponent. Even though if Dajo had a few crosses [that were] incredibly dangerous, Guti hit the post, they hit the post too, and then there’s a free kick that goes so close where Andy arrives half a yard late, you know, so I didn’t feel it was big chances. But there was a lot of half chances that we could have been better.”

On the results and recent run:

“I left the locker room right now that is not sad, but just disappointed that man we could have got these three points again. But I also left the locker room right now [saying] that we played in Seattle, in Dallas, in Salt Lake, in Salt Lake against the Galaxy, in Salt Lake against Houston, and we lost one game. We still got three ties, we won, we know the type of points we need to make the playoffs, but you cannot think like that right now. Now you just have to think game by game, trying to get points and not doing too much calculation and bring anxiety. We prepare every game like it’s the most important one for us. We tried to win tonight, but unfortunately we couldn’t.”

On coming back into the lineup the last two games:

“I felt pretty good, I was wanting to play, I hadn’t played for six games. I trained good, physically I felt good these two games. I’m happy to be back helping the team and I’m looking forward to the next two matches.

On the locker room after the match:

“We sat there in the locker room and we felt like we could win all three points. It would have meant a lot to us if we had won this match. But that’s the sport. One point is better than zero points so we need to focus on Saturday’s game.”

“For us as a team, it’s important to get a result, first and foremost. We spoke about it after the match as well. In the last five games, we’ve got three draws and a win, and all the games that were close to turning into wins as well. So it’s important for us to get the result at this point. We were solid at the back, the guys in front of me were great. I didn’t have much to do today.”

On getting more playing time:

“Honestly it’s the best thing in the world, it’s my favourite thing to be playing games, to be with the guys and helping the team in any way I can. It’s the best feeling. That’s what I trained for my entire life to get to these kind of moments.”