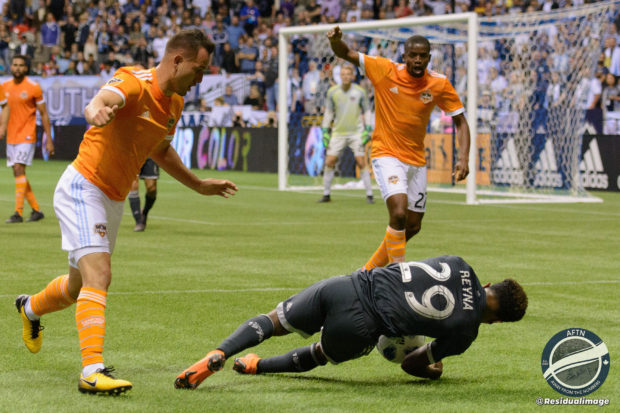 The Whitecaps lost 1-0 to Real Salt Lake last weekend. Despite some decent-at-times build-up play the ‘Caps were unable to create that many chances in the final third, and were unable to steal a point or three despite some improved defensive play. The only goal of the match was an Albert Rusnák penalty, awarded after notoriously dirty player Jake Nerwinski viciously took down Corey Baird in the box and…

Wait, Nerwinski didn’t touch him? And even if he did, Baird was already going down before any contact could possibly have occurred? Weird, I could have sworn that MLS had a recently-implemented system specifically designed to correctly deal with plays like that.

Now, taking away all sarcasm, the ‘Caps definitely didn’t deserve to win that match. However, a point would have been nice, and when the only goal of a match is due to dubious-at-best and incompetent-at-worst refereeing, it’s understandable why Vancouverites were up in arms Saturday afternoon. Of course, this is MLS, so we should’ve known that any new technology would inVARiably be used poorly, or seemingly not even used at all.

I don’t want to spend any more time on this, as I’m sure this topic has been discussed to death elsewhere, but I had to briefly vent on the decisive call that has left the ‘Caps adrift with Philadelphia and San Jose as the only teams without a point through the first two weeks of the season. Okay, let’s move on.

The positives from the squad’s Utah adventure stem from two players: Inbeom Hwang and Maxime Crépeau. Crépeau was the main reason the ‘Caps allowed only the one goal, as he came up with a flurry of strong saves late and was a steady presence throughout. If this is the type of goalkeeping we can expect moving forwards, that’ll be a huge boost to a defence that is still clearly a work in progress.

Hwang was again a standout, and despite not registering on the scoresheet, he was a pleasure to watch in possession. He unleashed a couple decent long-range efforts, had a beautiful one-touch spinning backheel to get the ball to Yordy Reyna on a counter, sent Andy Rose through on goal (where the Englishman was unable to get a good shot off), then nearly did the same thing again twenty minutes later. He is, in short, an incredibly promising player, and will surely start producing some assists and goals sooner rather than later.

Of course, in order to do that the ‘Caps will have to get their offense in order, as it spent much of last weekend looking toothless. Fredy Montero was unable to do anything at all besides draw a couple fouls, while Reyna and Lucas Venuto both had sub-standard showings as well. No one out of the Reyna-Venuto-Lass Bangoura triumvirate has jumped out from the pack as of yet, while Joaquín Ardaiz showed enough in his substitute appearance to warrant more minutes, and potentially a start against the Dynamo. All five of those players mentioned will be in the mix as the ‘Caps look to find the spark they need to start finding the back of the net. 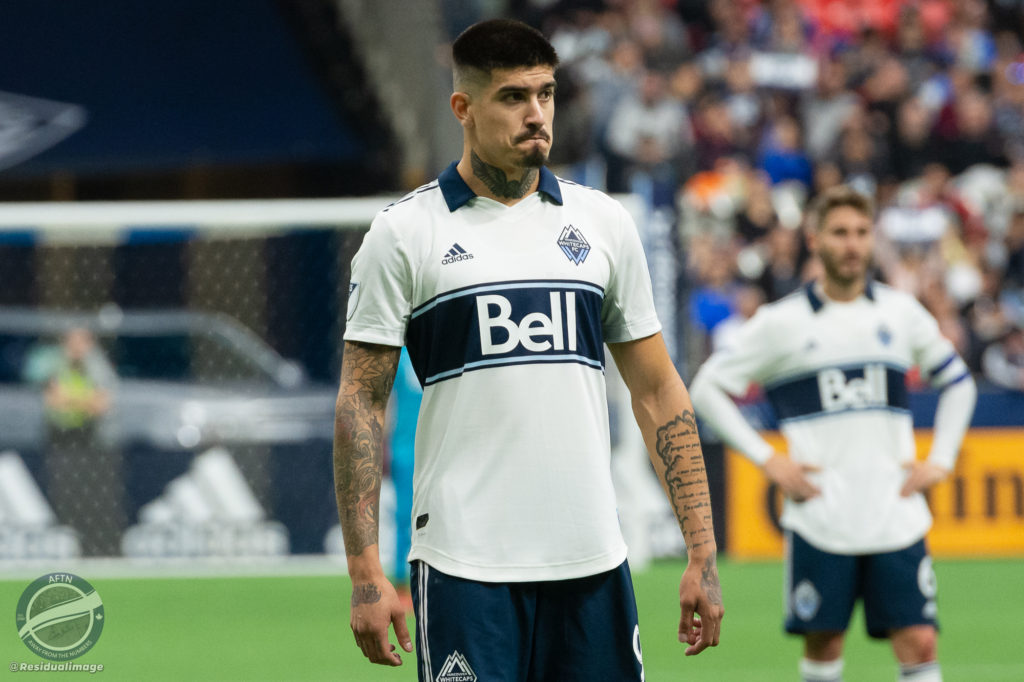 There was again a disconnect between the attacking trio and the rest of the team against RSL, and while Hwang did his best to provide that needed link, it didn’t fully materialize outside of some brief flashes. Rose was okay but not a ton more than that, while Jon Erice continued to do things but not do things at the same time, if that makes any sense. The number of simple passes gone wayward clearly indicate that not everyone is on the same page yet, so hopefully we will see continued improvement in that regard on Saturday.

One area that did look improved against RSL was the defence, though that was helped by Crépeau bailing out his compatriots a couple times. The biggest question at the back is how long we have to wait to see Ali Adnan, the left-back that the ‘Caps have brought in on an oddly short loan. He is only guaranteed to be here until the end of June, but he will be a welcome addition given that the ‘Caps have already played three players at left-back, only one of whom is actually one you could class as a left-back.

For the rest of the defence, Érik Godoy and Doneil Henry will likely continue their partnership at center back. Neither of them had any particularly noteworthy miss-steps, aside from Henry powering a header straight at the keeper when he was open inside the RSL box. Hopefully we don’t have to keep relying on our defenders to score our goals. Nerwinski will likely continue to draw in at right back, and will hopefully snap his unfortunate two-game streak of giving up a penalty. 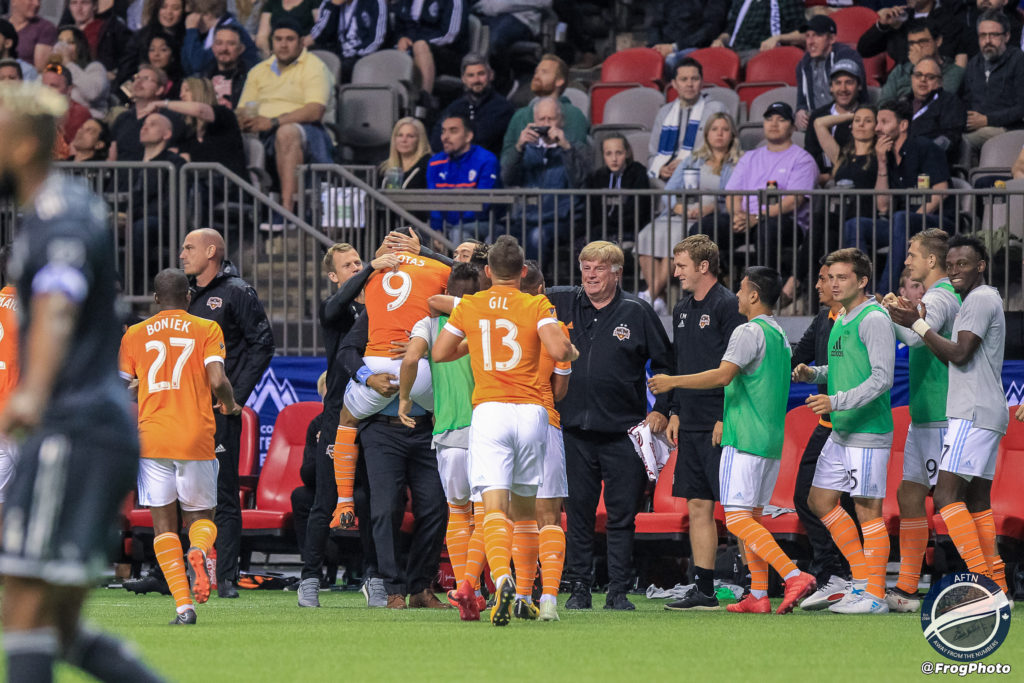 Looking at our hosts, the Dynamo have started their MLS season with a draw to RSL and a loss to Montreal, though their focus has been split due to their CONCACAF Champions League campaign. They finished up their two-leg quarterfinals series against the ‘Caps’ old friends Tigres with a 1-0 away loss on Tuesday night, falling 3-0 overall on aggregate. Any CCL hangover they might have this weekend would be thoroughly welcome.

Despite being shut out in their two matches against the Mexican powerhouse, Houston are still very dangerous going forwards, led by the swashbuckling duo of Alberth Elis and Mauro Manotas. Manotas has started the season off hot, with a goal in each of his MLS appearances, so the ‘Caps backline will have their hands full with the young Colombian.

The Whitecaps will have a two-week break after Saturday, before heading home to face Seattle, so win or lose they will have plenty of training time to work on their early-season issues, albeit with six players gone on international duty. This match is not a must-win, but it’s more of a must-not-lose, as an 0-3 record combined with a long layoff between matches is a recipe for discontent, at least amongst the fanbase – hopefully the team itself is more resilient when it comes to struggles on the pitch.