And then there were four. Although it took a while to get there.

After snow wreaked havoc with the VMSL fixture list, the four Imperial Cup semi-finalists are finally known, and both matches are set to take place at Empire Fields in Vancouver on Saturday afternoon.

BCT Rovers Tigers United, CCB LFC United, Coquitlam Metro Ford Wolves, and West Van FC are the Final Four, and with the two finalists guaranteed a place at this year’s BC Provincials, the stakes are particularly high for the Tigers and Wolves, who both sit adrift of the four VMSL Premier Division qualifying spots (although both look set to claim a berth now anyway depending on a late surge by Club Inter EDC Burnaby in the last couple of league matches).

We managed to get out to three of the quarter-final matches this past weekend, and the action was fierce, with all four games decided by a one goal scoreline.

The action got underway with a double header up at Newton Athletic Park in Surrey on Friday with Premier leaders CCB LFC United first up at home to Club Inter EDC Burnaby. 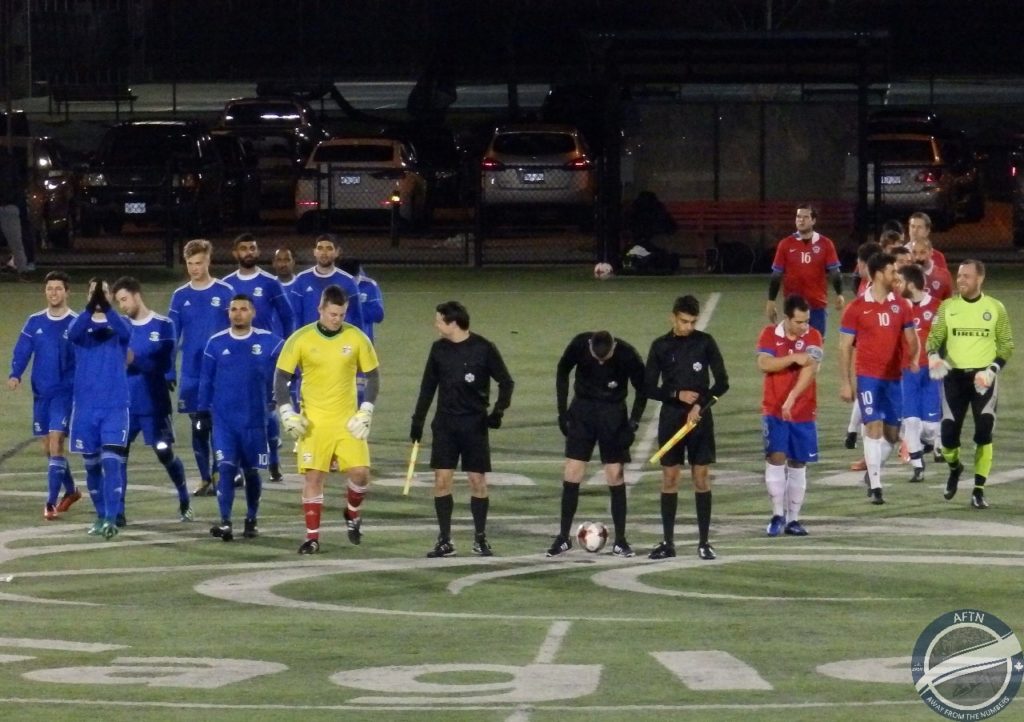 This was an end to end encounter from the start and it was Inter who shocked their hosts just eight minutes in when Chris Kyd rose well to head home a free kick. Both teams exchanged chances, with the better ones falling to Inter, but with no further goals that was all the separated the teams at half time.

With a league and cup double still firmly on their minds, CCB game out all guns blazing in the second half and eventually got back on level terms in the 64th minute when Caleb Clarke got on to the end of a through ball and fired home.

The match looked to be heading into extra time before a late goal fest eventually saw CCB through. Dzenann Bezdrob raced in to fire CCB into a 2-1 lead with four minutes remaining, before Victory Shumbusho added what looked to be the killer third in the last minute, after a well worked move.

Inter didn’t give up though and Alex Marrello got them back to within one two minutes into stoppage time, but there wasn’t enough left for them to force a dramatic equaliser and CCB advanced with the hard fought 3-2 victory.

We were splitting our time between the two matches on adjacent pitches, so were only able to capture the first two goals on video, but here they are along with some other highlights and the three other post goal moments. Every time we turned around to the other match, we seemed to miss something on the one we had been watching!

The Imperial Cup was the only thing Rovers Tigers didn’t win last season, and they were made to work hard to clinch their semi-final spot with a 2-1 extra time win against fierce local rivals Pegasus SFC, who ended up playing 102 minutes down a man after an early sending off. 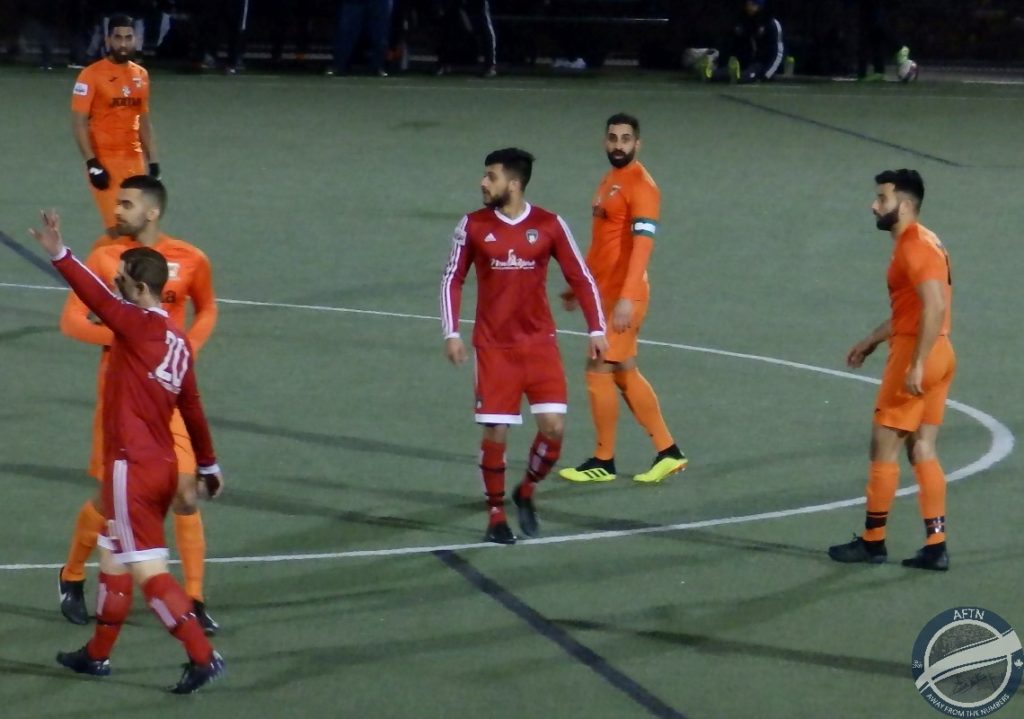 Recent meetings between these two teams have proved to be hard fought, feisty affairs, and Friday’s quarter-final was certainly no different. To be honest, I’d have been more surprised if the match had finished without a player being sent off!

Both teams were clearly up for it from the start, with every challenge and whistle ending with lots of loud shouts from the very packed benches, and the tensions were raised early when Nick Soolsma crashed a header off the bar.

With such an atmosphere brewing, it only took 18 minutes for the first big flashpoint and Pegasus’ Chetan Jhooty saw another straight red for violent conduct after a coming together in the middle of the park that had to see the players separated. Dilpreet Samra and Sergio Rodriguez were also both sent from the bench after the incident for “offensive language”.

That put Pegasus in a clear hole for the remainder of the night, but to their immense credit you wouldn’t have known they were playing with a man down and they took the game to Rovers Tigers on many occasions.

Their resistance was finally breached in the 76th minute when UBC’s Karn Phagura poked one home in one of the many goalmouth scrambles of the night. That looked to be that, but Pegasus kept fighting and took the game into extra time when Shabaz Khattra poked one home for the Horsemen in another scramble in the box with the last kick of normal time.

There were more close calls and drama in the extra period, but it was finally all settled with five minutes to go, and yes it was from another frantic spell of play in the box. This time Ashif Ismail was the hero for Rovers Tigers, tucking the ball away and sparking jubilant scenes on the touchline.

I haven’t seen so many goalmouth scrambles in a game for a long time, but it was a massive win for Rovers Tigers in the end, all but securing their chance to defend their Provincial title next month.

You can see two of the goals (ironically we missed Rovers Tigers first by turning around after hearing a cheer from CCB scoring their second behind us!) and some other highlights below:

The lovely Fen Burdett stadium in North Van was the setting for the match between Premier side Coquitlam Metro Ford Wolves and Division 1’s Rino’s Fury. 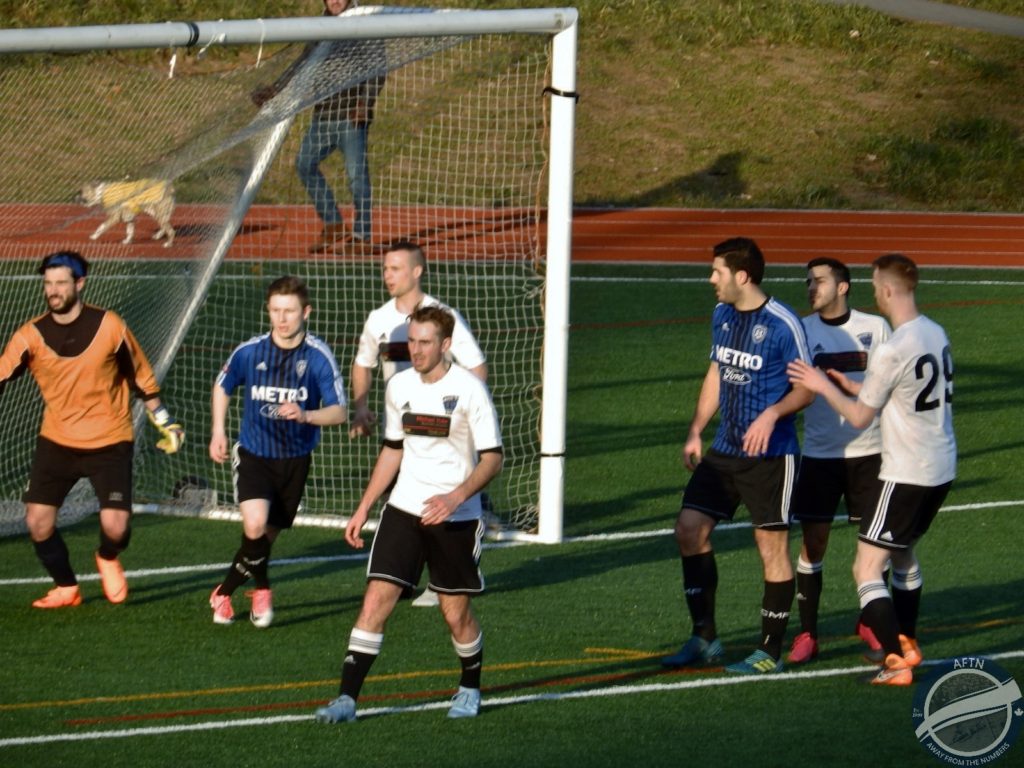 It wasn’t a classic, with the Premier side going through with a fairly comfortable 1-0 victory, that could have been more if they had their shooting boots on.

That said, Rino’s had a couple of early opportunities to take the lead in the first half, but weren’t able to find the killer touch, before the Wolves went hunting in packs.

The only goal of the game came late in the first half when former SFU player Andre Pietramala rising to head home a deep free kick into the Fury box.

Metro Ford had enough chances to put the tie to bed in the second half, but Rino’s also had a shout for a late second half penalty waved away that would have sent the match into extra time.

Here’s our video of the goal and some other highlights from the match:

The last quarter-final took place at Ambleside on Monday night, which we’d hoped to make it along to so as to record the full quartet, but it was such torrential rain that heading out in that would have been insane! I’m getting soft in my Canadian days.

Before that game though, West Van had to wait until Saturday afternoon to learn their quarter-final opponents when the much postponed match between Rino’s Tigers and the already relegated Division 1 side FC Romania was finally able to be played, ending in an 11-2 thumping handed out from the Premier team.

Sadly for the Tigers though they seemed to use up their quote of goals in that Round of 16 game and were kept off the scoresheet against West Van, who advanced thanks to Keith Jackson’s 9th minute winner.

That now sets up a semi-final for the Amblesiders against old foes, Coquitlam Metro Ford Wolves, and that game will kick off on the Empire Field South Turf at 2.30pm on Saturday.

Get yourselves along to Empire if you can, as it’s set to be a cracking day of action.

The second leg of the U21 cup semi-finals will also be played on Saturday, with the visiting team in both first legs coming away with a slender one goal advantage. West Van U21’s host BCT Tigers U21’s at Ambleside (kick off 4pm), after their 1-0 win last Saturday, while TSS Rovers U21s are on the verge of their first ever VMSL final following a barnstorming 5-4 win at Faly Academy Soccer U21’s on Sunday. Kick off for that one is 6pm at Minoru Park Turf 2.

It’s going to be a beautiful day, so get out and enjoy some exciting local cup soccer.