For around 20 minutes, it looked like the Whitecaps had turned some sort of corner over the long corona break. A beautiful Ali Adnan finish followed up by an own goal off an inexplicably wide-open counterattack gave the ‘Caps a 2-0 lead, and there was hope in the air.

Sadly, that was as good as it got. The walls quickly began to close around the ‘Caps, with the Earthquakes setting up camp inside and around their penalty box. They broke through Maxime Crépeau’s goal with one of their 22(!) corners, and despite another piece of cataclysmic defending that gave the ‘Caps a 3-1 lead, San Jose came all the way back with a 99th minute winner that was even more painful than watching 55-year-old Chris Wondolowski somehow score again against Vancouver.

It was more of the same, a game that would not have been out of place in the dog days of last summer. The ‘Caps have now lost three straight against San Jose, and have somehow been outshot 105-18 over that span, with the shots on target count reading 41-5. Poor Crépeau made 31 saves in those three matches, and still conceded ten times.

Now, given the tournament format of four third-place teams going through to the knockout round it’s not quite do-or-die for the ‘Caps yet, but they will be in dire straits if they fail to get a result against Seattle Sunday night.

In fact, if they get nothing out of the game, and Chicago beat San Jose in the earlier match, then their MLS is Back adventure will already be over before it has even begun. The last team to play and the possibility of being the first team to crash out looms large.

Recent history does not favour our heroes, as they are 0-5-3 in their last eight meetings with the Sounders. Their last win over their Cascadia rivals came all the way back on April 17th, 2017, with Russell Teibert the only player in Orlando who was in that 18-man squad.

When it comes to how the ‘Caps will line up for match two, don’t be surprised if things look pretty much the same as Wednesday. Janio Bikel’s injury in training and Bryan Meredith’s unfortunate departure means the team is already down eight players, and that’s not counting the potential absence of Leonard Owusu, who came off with a hamstring issue in extra time against San Jose.

Marc Dos Santos has been left with a very young squad to pick from, and he did not seem ready to trust many of the club’s prospects with minutes against the ‘Quakes. Despite having five subs available, MDS only made three, one of which came in injury time. If he doesn’t feel that players like Simon Colyn, Michael Baldisimo, and Damiano Pecile are ready for real minutes, there is limited potential for tweaking the line-up against Seattle. If Owusu is indeed out, then there are three options (assuming the other ten starters from Wednesday all start again).

The first is to bring in either Theo Bair or Ryan Raposo and switch to a 4-4-2, which is what the ‘Caps played in their first two games of this year. Taking out one central midfielder puts more pressure on Teibert and Inbeom Hwang, but as long as Cristian Dájome and David Milinković put in the work defensively it’s doable (and it did get them a win against LA).

The second option is to bring in Derek Cornelius and switch to a 3-4-3, which I feel is less likely. Not only have three-at-the-back attempts gone poorly for the ‘Caps historically, but switching to a very different system in the middle of a three-match group stage would be quite a radical choice. Cornelius might very well draw into the line-up against Seattle, but just in place of Jasser Khmiri or Ranko Veselinović (of the two, I’d say Khmiri has better odds of being replaced).

The third option is to keep the 4-3-3 intact, and bring in another midfielder (most likely Patrick Metcalfe) to replace Owusu. If MDS is convinced the 4-3-3 is the way forward then this is the most logical choice, though it would mean giving the start to someone who just made his MLS debut in the final few minutes of Wednesday’s match.

If I was to guess what happens to the line-up Sunday, it would be either Bair or Raposo coming in for Owusu, and no other changes. That’s not necessarily a bad thing, though I hope MDS uses more of his subs, and uses them sooner. Being able to bring on up to five pairs of fresh legs is huge in a compressed schedule like this, and the ‘Caps need any kind of boost they can get. 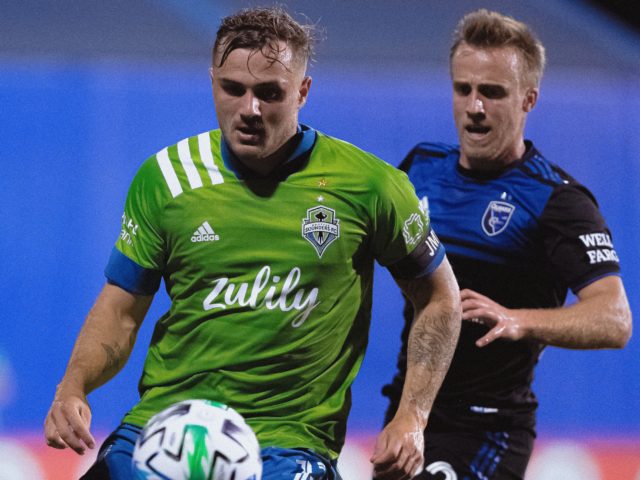 Looking at the Sounders, they are also in dire need of a boost, as this will be their third match of the tournament, with just one point to show for their efforts so far. A scoreless draw against San Jose last week was followed by a 2-1 loss to Chicago on Tuesday, and if they don’t beat the ‘Caps they’ll be packing their bags to head back to the west coast.

Seattle made two changes to their line-up in their second match, with Miguel Ibarra and Shandon Hopeau coming in for Jordy Delem and Jordan Morris, though Morris did replace Hopeau at halftime, and provided the assist for their lone goal of the tournament so far. Midfielder Joao Paulo has missed both matches so far with quad problem, and forward Will Bruin will also be out with a tibia injury suffered a few weeks ago.

Nicolás Lodeiro made his season debut last week after recovering from an injury of his own, and will obviously be the man to watch for the Sounders, playing underneath Raul Ruidiaz. We’ll see if Sunday’s match will be as defensive as the two teams’ meetings last season, which finished 0-0 and 1-0 in favour of Seattle, Kelvin Leerdam’s stoppage time winner in June was the only goal either side could find against each other in 2019.

It’s safe to say that Wednesday’s performance was far from ideal. The Whitecaps won’t make it past the group stage if they’re unable to have any semblance of control in a match, and the tournament format means they don’t have much time to figure it out. They face a desperate team Sunday, and it’s up to the ‘Caps to try and put an arrow in the heart of MLS’ masters of the slow start.